Carolyn’s neighbor gave her two giant bags of yellow grapefruits from her tree and I jumped at the chance to take some home with me when she offered. Did you know that the grapefruit got its name from the way it grows in clusters (like grapes) on the tree? There is no mistaking a grapefruit tree, they are large with glossy dark green leaves and the fruit hangs in clusters. In California the peak season for grapefruit is January through June. 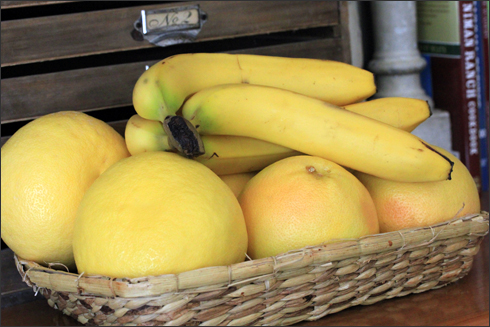 I immediately searched on Pinterest, Food Network and other recipe websites to find something to make. I kept finding recipes where they broiled the grapefruit with brown sugar or honey. I knew I had both, so I thought I’d give it a try. One of the recipes I came across suggested using ginger, cinnamon, bananas and/or strawberries as possible toppers. 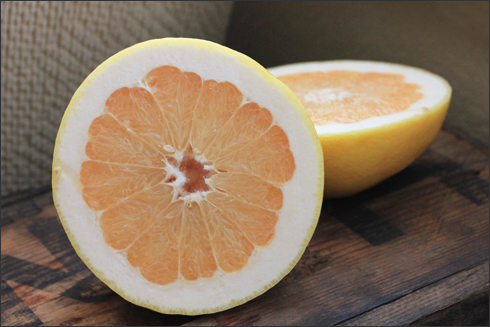 I gave my grapefruit a nice water bath/scrub and then I sliced it in half. It was gorgeous… 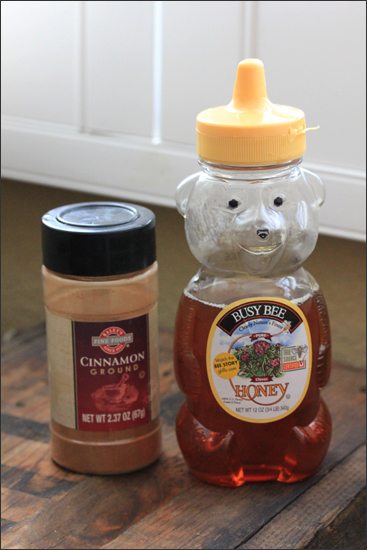 I opted to go with bananas, ground cinnamon and honey as my toppers. 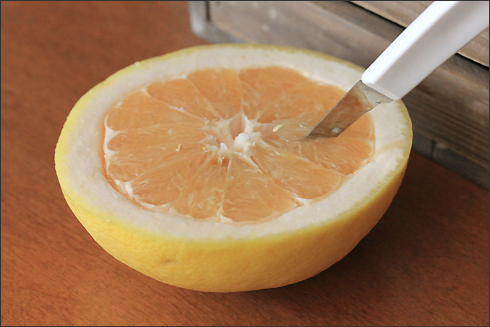 I used my makeshift grapefruit knife. I had accidentally slammed my Pampered Chef Quikut Paring Knife in the drawer a few months ago, creating the perfect curved blade for sectioning out the grapefruit. If you do a google search for “grapefruit cutting” you will find the many different ways people have perfected sectioning, segmenting and slicing grapefruit. I just used my knife to cut around the circle. I then traced each section with my knife and placed both halves onto a baking sheet. 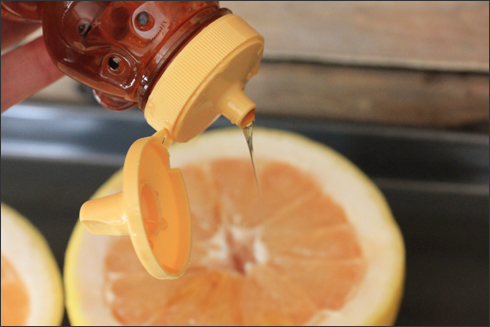 Next up was drizzling the honey over each grapefruit half. I wasn’t precise with my measurements, I just kept squeezing as I drizzled a pattern across each half… while juggling my camera. 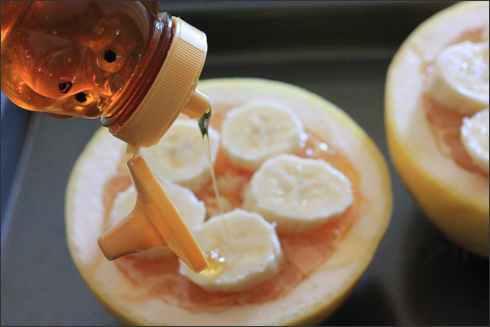 I then added sliced banana pieces and drizzled a second layer of honey. This might be where I would do a light dusting of brown sugar next time to help with the caramelization under the broiler. 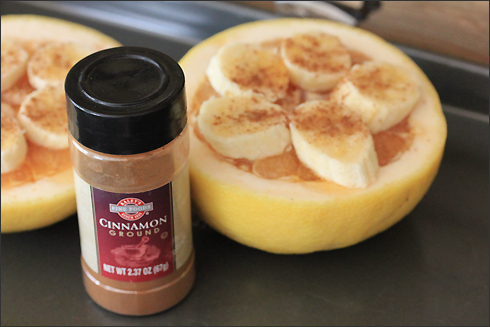 I sprinkled ground cinnamon on top of the honey drizzled banana pieces and then I placed my baking sheet and grapefruit under the broiler. 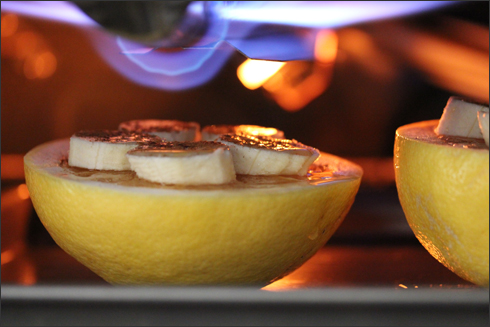 I watched the grapefruit like a hawk. I am the queen of burning bread or anything else I place under the broiler. I find that I get the best broil results when the door is ajar. Leaving the door open helps vent the steam that generates, leaving the oven environment very hot and dry – this helps create a good crust on garlic bread or in this case, grapefruit, honey and bananas. Total broil time was just over 4 minutes. 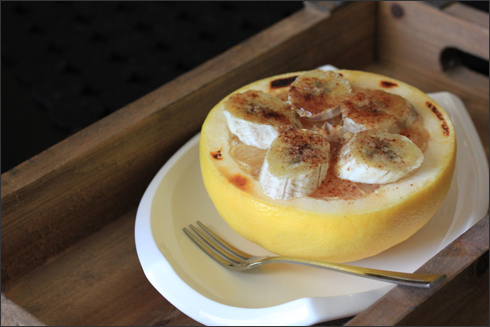 I probably could have left the grapefruit halves under the broiler a little longer to help with the caramelization, but I didn’t want to burn them. I loved the cinnamon/banana combination and the sweetness of the honey helped with the tangy and slightly bitter flavor of the grapefruit. 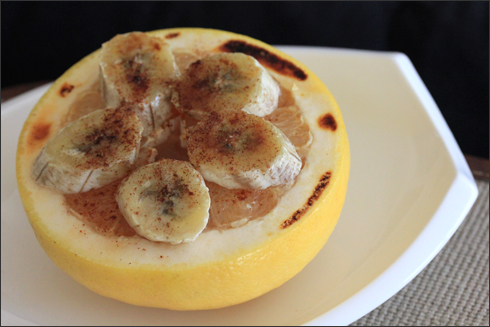 Carolyn found a recipe for broiled grapefruit that included an oat crumble, that might be another option to try with one of the remaining grapefruits. 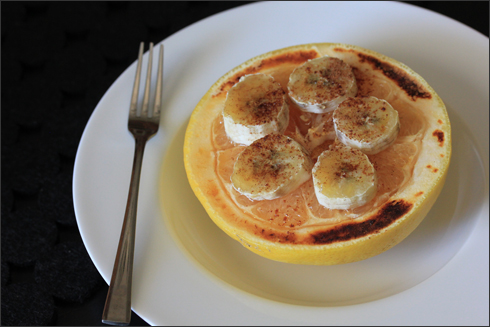 I tend to stick with my favorite fruit – an apple… so this was a great morning switch-up. I normally purchase Ruby Red Grapefruit because they seem to be a little sweeter. Way back when I was doing the fruit and vegetable challenge through my work, I learned that red grapefruit also has significantly higher levels of vitamin A. One cup of red grapefruit provides about 50 percent of your daily recommended intake of vitamin A. In contrast, yellow (white) grapefruit only offers 2 percent of your daily recommended amount. 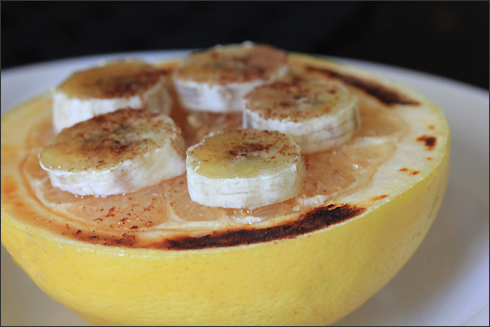 The rest of my grapefruits will go into the fridge. You can store grapefruit at room temperature up to a week, or up to 8 weeks in your refrigerator. Now I’m off to find more recipes to experiment with. I’m thinking grapefruit granita, a citrus salad or grapefruit cupcakes are next on my list. 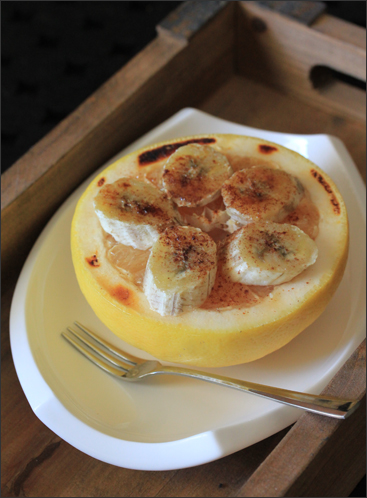 Thanks Carolyn for supplying me with your neighbor’s wonderful grapefruit. Can’t wait to see what you end up making with your haul.

Permanent link to this article: http://foodiddy.com/?p=9730