I was generously gifted a copy of Mrs. Beeton’s Household Management from a dear family friend. I was immediately drawn to the character of the tattered cloth cover, crayon marked title page and embossed spine. This book got a lot of use and as I flipped through each page, I knew I would treasure it along with other vintage cookbooks and collections of family recipes that have been passed down to me. 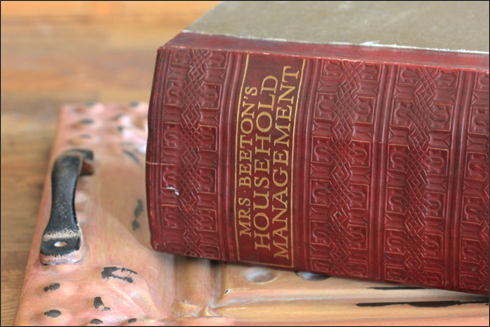 I started researching the book’s history and my curiosity continued with each new bit of information I gathered about Mrs. Isabella Beeton. God I love the Internet and yes, I do believe everything I read on it.

While the 1970’s brown and gold World Book Encyclopedia set, placed front and center in my family’s library, seemed like the most exciting collection of information ever – so many websites now open doors allowing you to investigate the history behind just about anything. How could you not keep challenging and teaching yourself new things? Adventure awaits with every click.

The geek in me would actually like to revisit and rewrite some of the reports I did back in school using the unlimited resources now available online. Please note, rewriting reports from my childhood will NEVER happen… but it is something that I think about. Perhaps one of my fur children will be assigned a report at some point in their doggie lives. Ruff, ruff…Rosetta Stone…ruff, ruff. 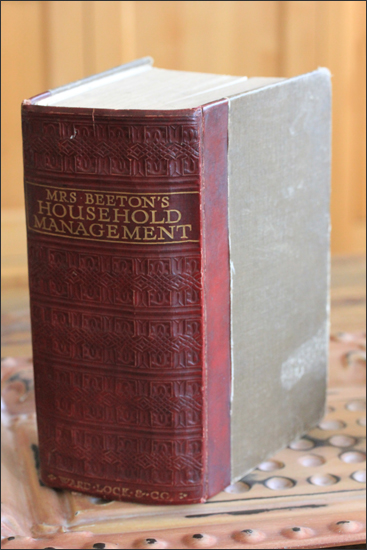 So what did I learn? I learned that Mrs. Beeton’s husband Samuel, whom she married in 1856, was thought to be a publisher of considerable flair and brilliance, and that 20 year old Isabella immediately became immersed in editing, translating French novels and helping with Samuel’s business affairs.

In 1852 Samuel had launched The English Woman’s Domestic Magazine, the first magazine to be devoted entirely to the interests of women, which was a great success, much of it edited by Isabella. The Beetons invited readers to submit recipes, and so many poured in, that a selection of them were published in 24 monthly installments from 1859 to 1961. In December of 1861, the recipes were collected into book form under the title The Book of Household Management. 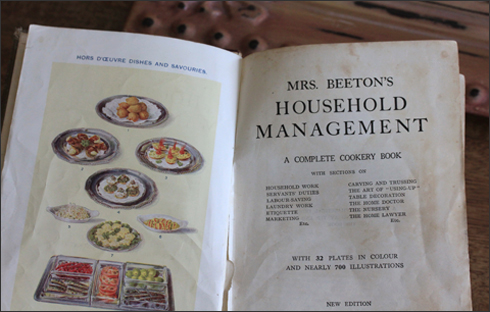 So began the major work for which Mrs. Beeton is known. Mrs. Beeton’s Book of Household Management was a serious cookery book of mid-Victorian and early 19th century recipes – recipes which would help people, as she put it herself, to “live economically, tastefully and well.” The book was an immediate best-seller, selling 60,000 copies in its first year of publication and nearly two million by 1868.

Every recipe that was published was tried out in Isabella’s own kitchen. Only the successful ones made it into the book. She felt that each recipe should be economical, so the cost was always included at the end of each recipe, as well as how many people each dish would feed. I find this part to be rather interesting seeing as she had a full staff, including a cook and a kitchen-maid – uh yes, super economical.

I also learned that Isabella died in 1865 at the young age of 28, from puerperal fever after the birth of her fourth child, leaving Samuel to raise their children. Source: mrsbeeton.com and wikipedia.

In 1866, a year after Isabella’s death – Samuel sold the rights to Household Management to publishers Ward, Lock & Co. – they published the edition that I have.

During my research, I stumbled upon a blog: Mrs. Beeton is 365 Days and couldn’t help but compare it to one of my favorite movies, Julie and Julia – where blogger Julie Powell’s 2002 challenge was to cook all the recipes from Julia Child’s first book.

I don’t plan to showcase Mrs. Beeton only recipes on Foodiddy or anything like that, but I will from time to time highlight something from the book. 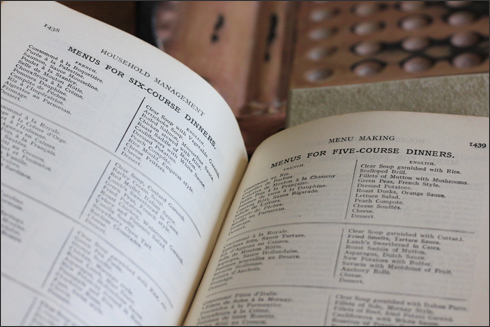 Perhaps I’ll host a dinner party using one of the five or six course dinner menus, I think that could be fun. While the thought of making roast saddle of mutton sort of frightens me, I think I could find other things like broiled salmon with mousseline sauce. It should be noted that I had to google “mousseline sauce” to learn that a mousseline sauce mirrors the smooth, flavorful elements of hollandaise sauce – but with the added benefit of the addition of rich whipped cream. Mousseline translates as “muslin” in French, so classic mousseline sauce needs to be served with other equally delicate textured foods, like fish. Probably why Mrs. Beeton suggests it with salmon. Smart lady that Isabella. 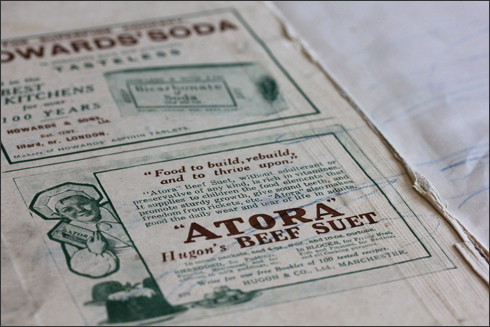 My 1930’s edition has many ads in the inside cover pages. The book contains 32 color plates and nearly 700 black and white illustrations – another thing for this graphic designer to geek out on. 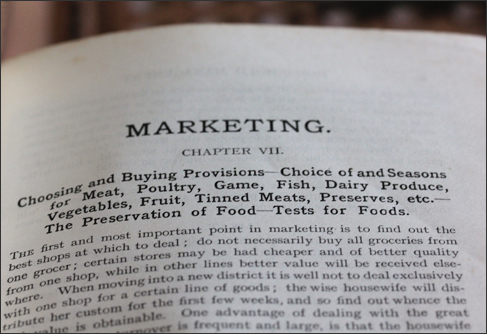 Not sure what it means that my first thought on seeing the Chapter VII title “Marketing” was to immediately go to “the action or business of promoting and selling products or services, including market research and advertising” and not – getting my trolley/buggy ready for food shopping. I guess working at an ad agency and later for a marketing firm has stuck with me for good. 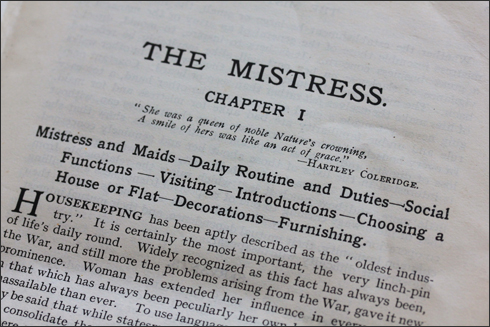 In Chapter I – The Mistress, Isabella made it clear that the mistress of the house was not expected to dirty her hands – the majority of Isabella’s instructions are designed to be carried out by servants. The book contains meticulously detailed advice on the duties of a wide variety of staff – cooks, dairy-maids, kitchen-maids, nurse-maids, valets, lady’s-maids, footmen and the like. Last note of this post: That ain’t happening at Palace de Foodiddy.

One last item from my search… I found a Mrs. Beeton post on Peak a Boo Vintage where Krissy blogs about her obsession with vintage cookbooks… she also shares images from episodes of Downton Abbey that showcase copies of Mrs. Beeton’s Household Management and Mrs. Beeton’s Family Cookery on the bookshelves of Downton kitchen. I have yet to watch any Downton Abbey episodes, but I know some of my readers are a tad obsessed with the show. Britt… Barbara… Bonnie…Gail…Kristen… I know my Mom and I would love it. I need to plan a day where we just start with season 1. 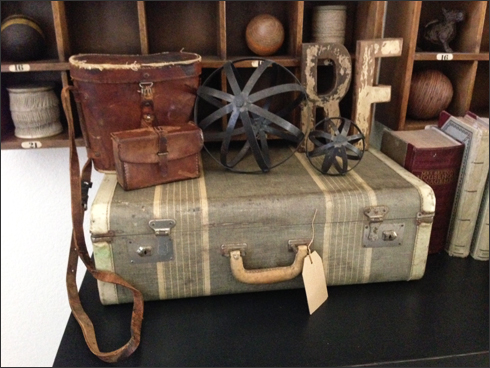 My gifted copy of Mrs. Beeton’s Household Management will continue to proudly sit in my entry way next to some strangers suitcase I picked up at my favorite antique store. Not a very romantic story – hmmm… proudly sits next to_____________  help me fill in the blank. I need a good suitcase story that matches the history and magic of the book… and go! 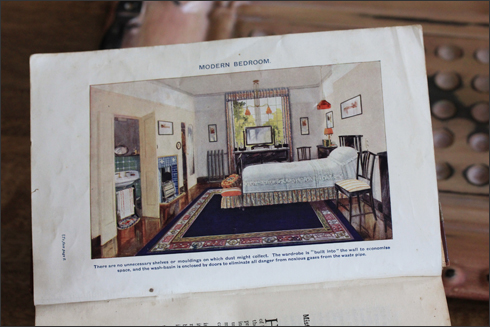 Well… it’s about that time. I need to head off to my not so “modern bedroom” for slumber. Until next time…

Permanent link to this article: http://foodiddy.com/?p=9737