An Evening With Chef Curtis Stone

Last week started with a text from my girlfriend (AKA my foodie-adventure-BFF, Kristen) “What are you doing on Friday?” ending in a string of text messages that contained a photo invite to an evening with Chef Curtis Stone. YES PLEASE, I’m in. My other foodie BFF Michelle was also on the group message. We were all set, our Friday night would include the ever-so-dreamy Chef Curtis Stone for a meet and greet and demo in the Bosch test kitchen at our new Delta Shores, Sacramento RC Willey store. 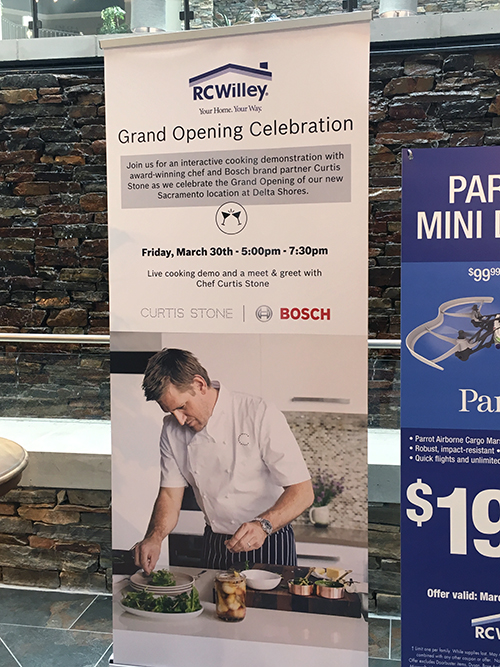 Kristen arrived early to grab seats in the front row – woohoo, score! I’m going to owe her forever because this was hands down my favorite celebrity chef encounter and sitting in the front row had a lot to do with that. Her reward was getting an early glimpse of Curtis getting things ready, so jealous I missed that.

Speaking of cookbooks, how is it possible that I didn’t already own a Curtis Stone cookbook? And WHY did I not think of that until Kristen mentioned it the day before the event? It was too late for a last minute Amazon purchase to guarantee delivery, so off to Barnes & Noble I went. Kristen and Michelle needed them too, so of course the one I went to only had two copies of What’s For Dinner? – thankfully they called another store and I was able to grab a third copy. 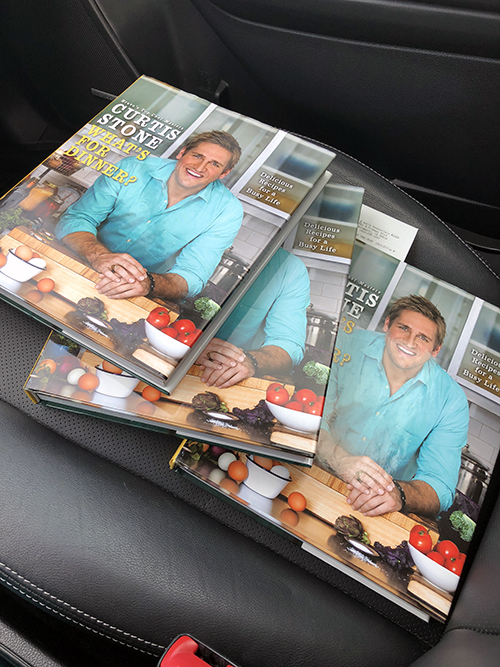 We sat with our cookbooks in anticipation as we admired the beautiful Bosch test kitchen… while also noticing a stack of his newer cookbooks on a side table. My immediate thought, son of a #!%@*, then we found out that those weren’t for purchase, they were going to be raffled off. Have no fear, my cookbook errand running wasn’t in vain after all. 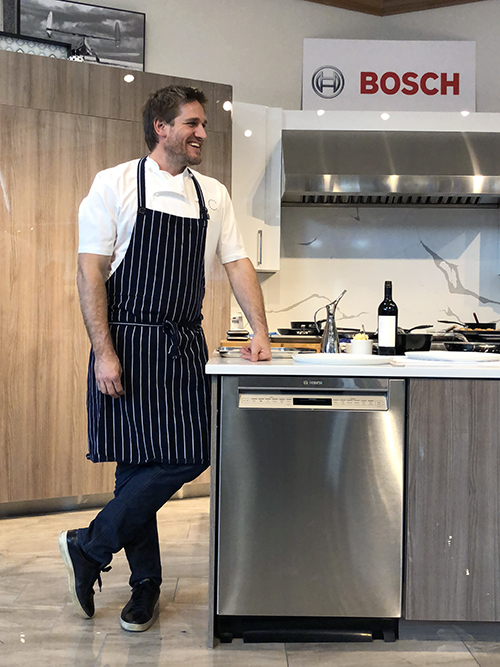 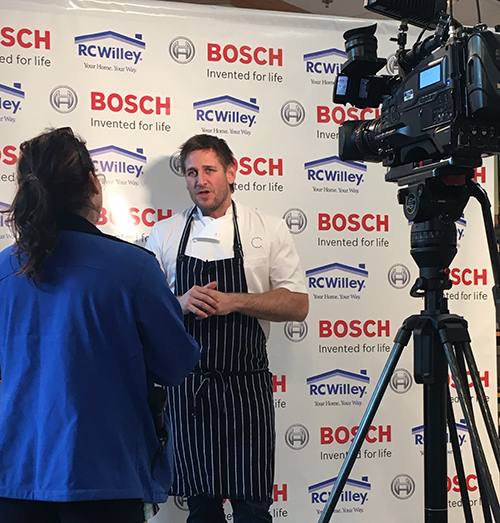 Fox 40 grabbed him for a quick interview and then the meet and greet started. 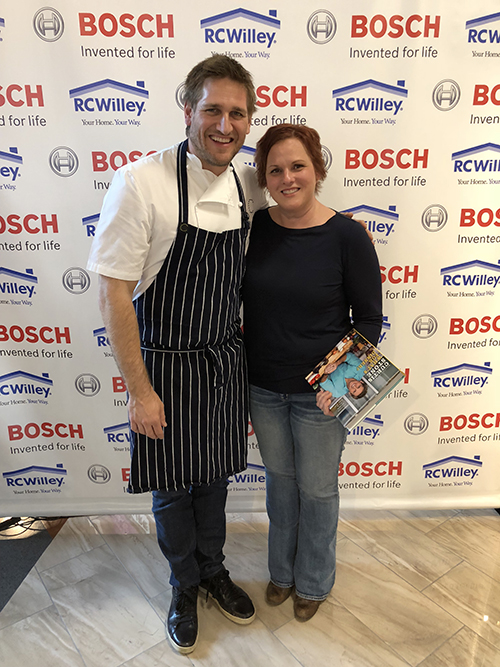 He was chatty as he signed my cookbook – then he asked about the name Foo – I told him it was my food blog persona and he was stoked that I was a food blogger – my interpretation of the positive things he said to me. If he only knew how infrequently I blogged.  Ha-ha. 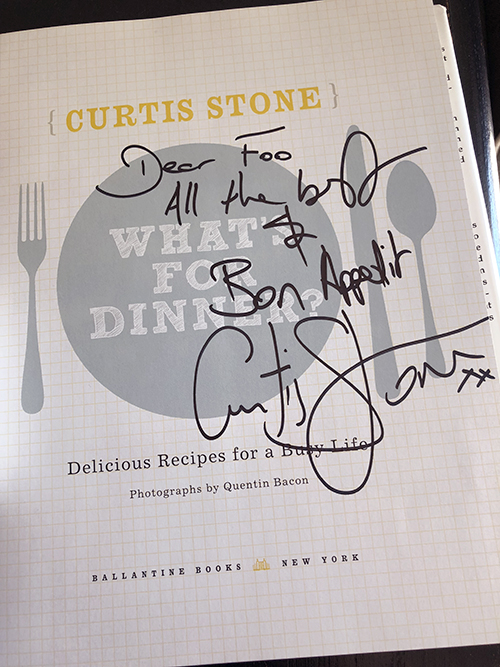 Once everyone went through the line, the demo  portion started. The crowd grew to standing room only. He introduced his assistant Vanessa Garcia, head pastry chef at Maude, the twenty-four seat restaurant he opened in Beverly Hills in February 2014. He talked about how they have spent the last three years creating monthly menus (ten course meals stemming from a single seasonal ingredient) and how that almost killed them… so the restaurant has recently shifted to focusing on a seasonal set menu (four menus per year, inspired by different wine regions). He shared how they travel to each region to experience the culture, history, food, and wine to help them create the perfect menu. 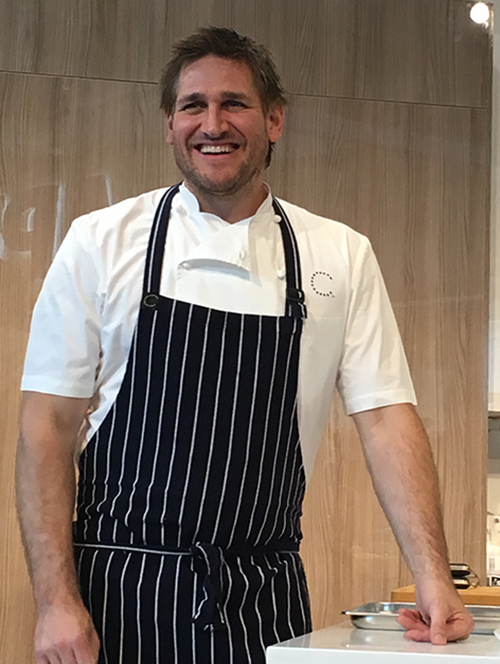 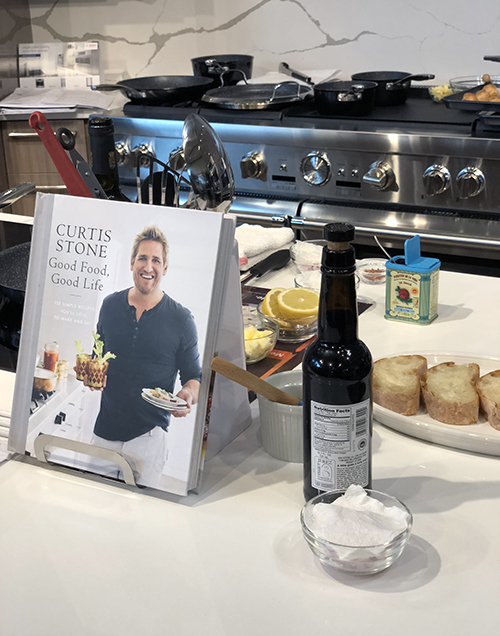 He started things off  by toasting some bread with a little olive oil, salt and pepper that would be the base to the Gambas al Ajillo – shrimp appetizer he was making. As he cooked, he explained the different features of the Bosch Flex Induction Cooktop, which included answering the question: Why use induction? His answer… it’s faster, it’s way more accurate, takes less energy (so costs less to operate) and once you turn it off, there’s no lingering radiant heat – so it doesn’t heat up your kitchen/house. He’s been using induction cooktops in his restaurants for years. 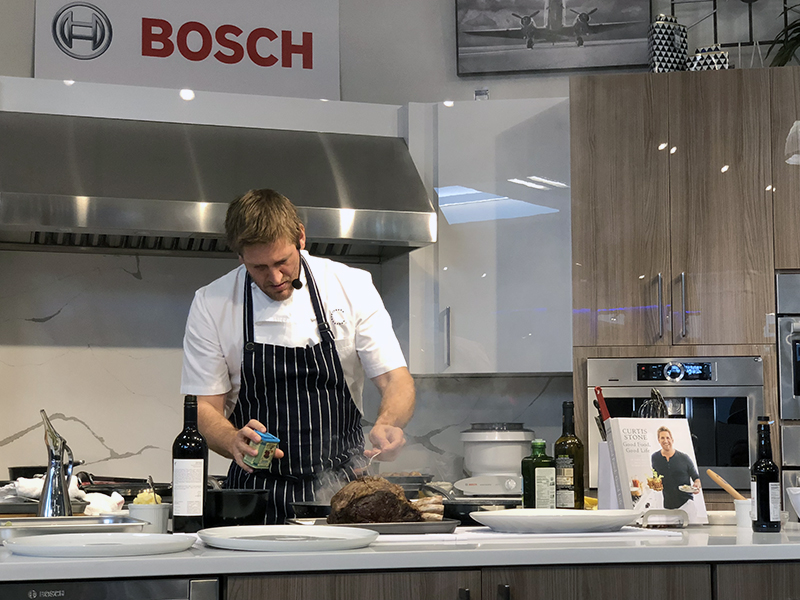 Chef Curtis started with olive oil and butter in the pan and then added chopped shallots – the next steps were to add dry chili pepper flakes and smoked paprika.

This is where things got crazy. Once the chili pepper flakes and the smoked paprika hit the hot oil, he started to cough… choking on the heat from the spices. He joked about it, asking Vanessa where she got the stuff from. 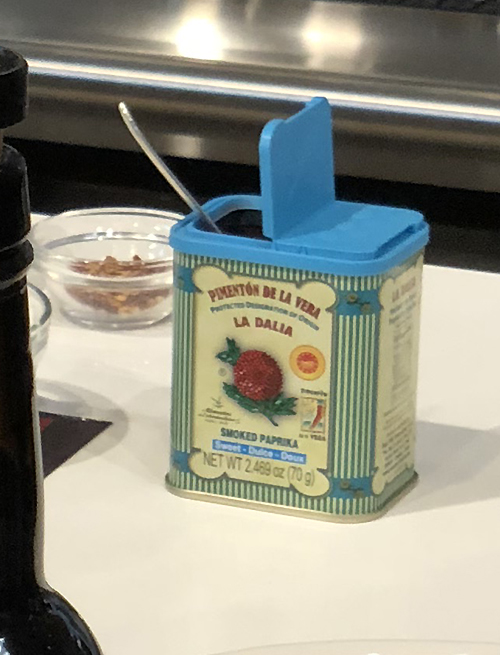 Everyone was laughing… then it hit us in the front row. We all started coughing. There was no hiding it. Then the row next to us got it – 15+ people all coughing simultaneously. The next words out of his mouth “Chef Curtis Stone comes to Sacramento for the first time and kills the entire front row – I’m so sorry, I’m so sorry…” everyone continued laughing, it was REALLY funny. Luckily they had passed out water, so we were all good within a minute or two of breathing it in.

Next up, the large, raw shrimp (peeled, deveined, tails intact) were added to the pan followed by some more butter, sherry, lemon juice, prawns stock and parsley. People were invited up to taste the shrimp.  Kristen let me try a bite of hers, it was delicious. 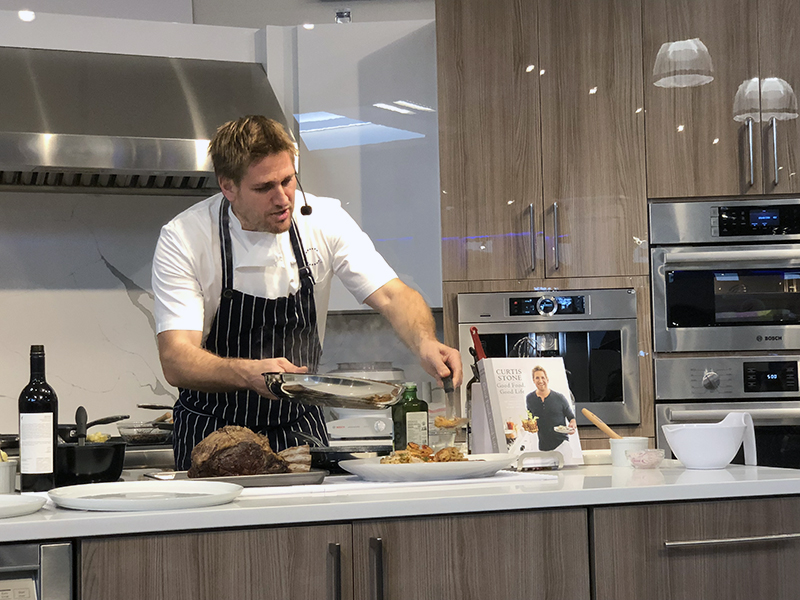 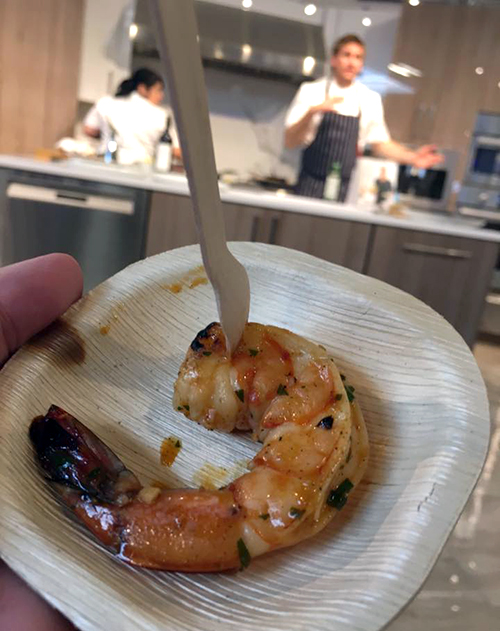 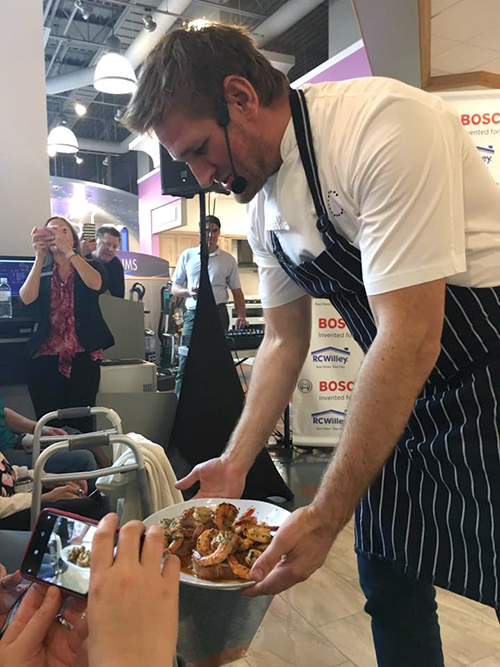 This is Kristen’s photo of me me taking a photo of him passing around the finished plate. Food blogger in action. Thanks for the shrimp photos Kristen, mine turned out shitty because he moved at the last minute and I was all a flutter due to his close proximity. 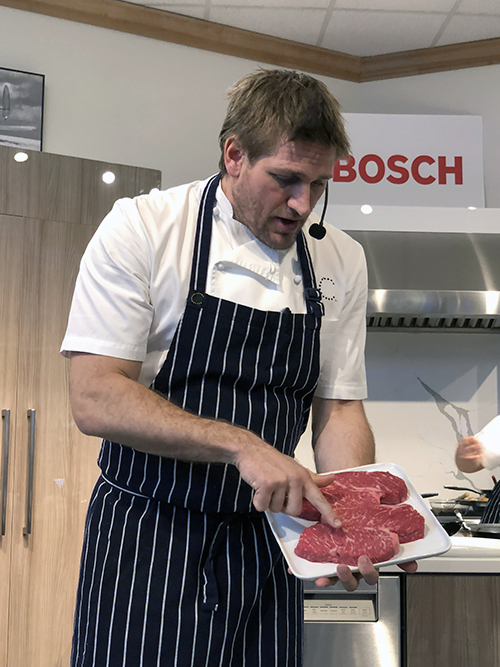 Chef Curtis also demonstrated the speed boost feature of the induction cooktop by searing some steaks. He got the pan super hot and used the side of his tongs to push the steaks down into the pan. After a few minutes he dropped the temp down – he was looking for a beautiful golden brown sear. He explained why he didn’t add any oil to the steaks or the pan. There is enough fat already around the edges and through the intermuscular fat, which melts, creating caramelization. The less you use fat as a cooking medium and more as flavor, the healthier it is. 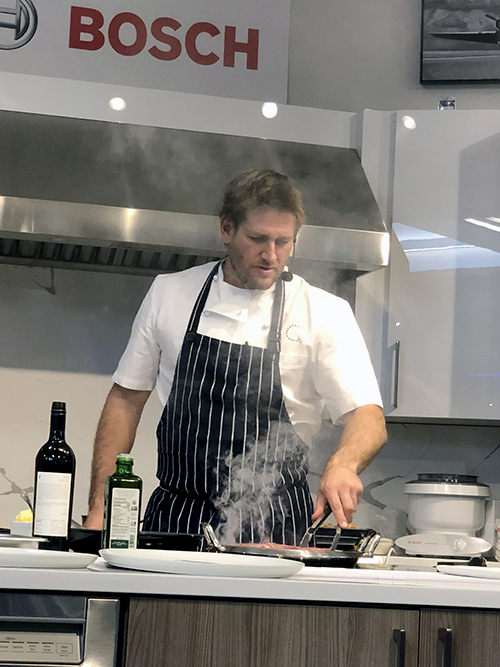 One tip I learned was resting the steak midway through cooking. I always knew to rest the meat after it was cooked, had never seen it rested ½ way through the cooking process. When he finally cut into the steaks, there was virtually no blood on the cutting board since all the juices remained in the steak. I will definitely be trying that out with summer grilling.

He created a sauce for the steak using red wine and beef stock combined with the steak pan bits – reducing that down. He mentioned that you could also add butter to smooth it out or fresh herbs as a finisher.

The steak was plated on top of wild mushrooms that he cooked with olive oil, shallots, garlic and fresh sprigs of thyme.

He shared… button, portobellos, ceps or trompettes, the type of mushroom doesn’t really matter since they all cook in a similar way. He mentioned the importance of adding the garlic after the mushrooms had begun to sweat down a little – if you add it too soon, it will brown too quickly or burn. 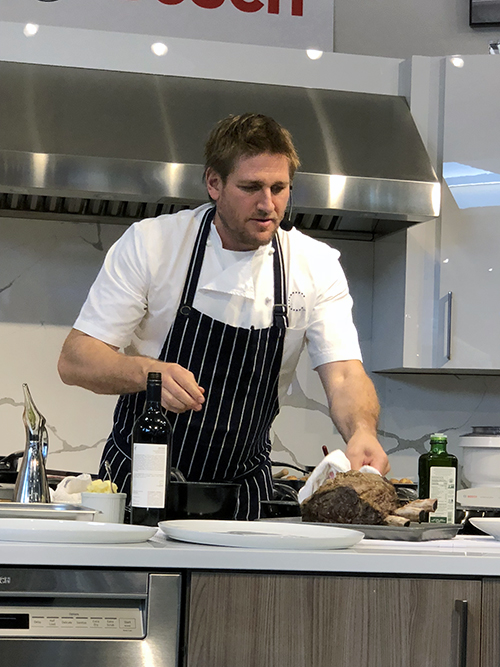 I forgot to mention that there was a roast cooking in the oven when we arrived… he also demonstrated the steam/convection oven by roasting asparagus and potatoes – both cooked simply with olive oil, salt and pepper. 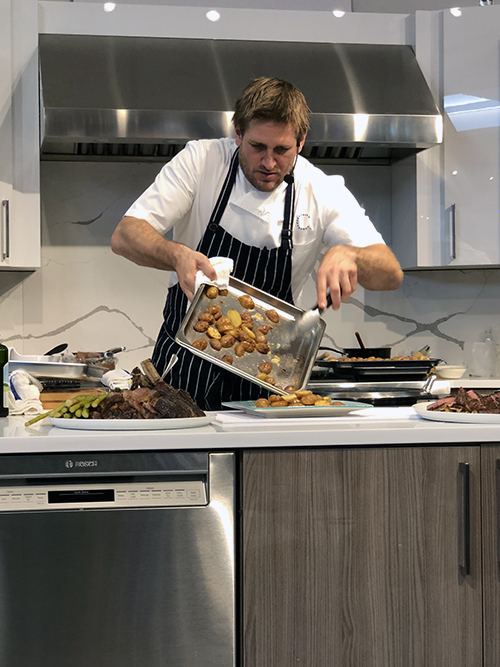 He plated everything and then invited people up to taste. I was able to get a slice of the roast, a piece of steak and a potato – they had run out of the little bamboo plates, so napkins it was. I split my haul with Kristen. Michelle and her daughter were able to grab samples as well. 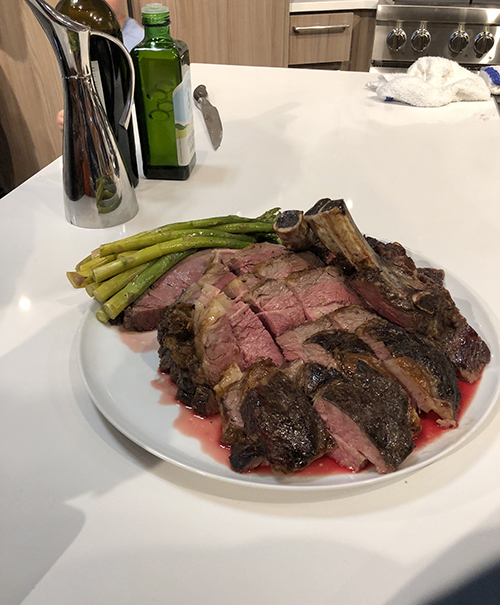 The demo portion of the evening ended with chocolate filled cream puffs decked out with edible gold flakes. 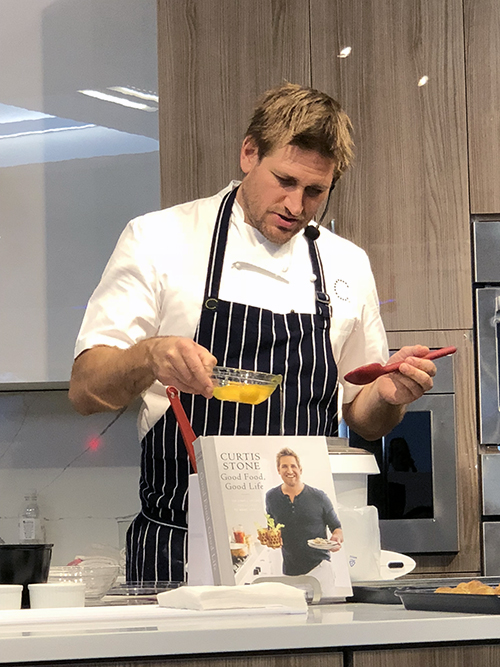 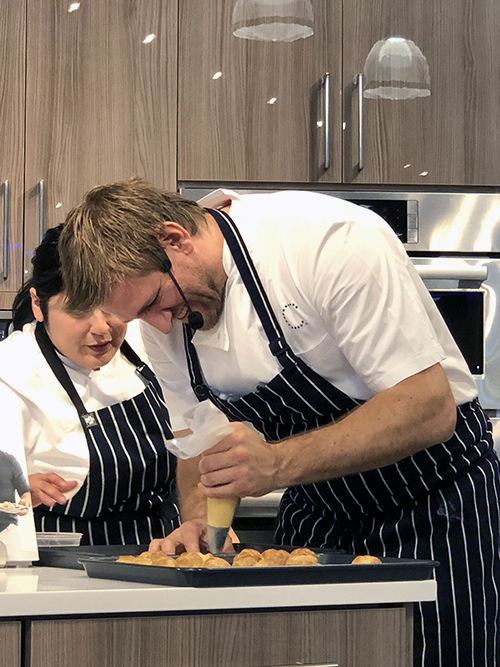 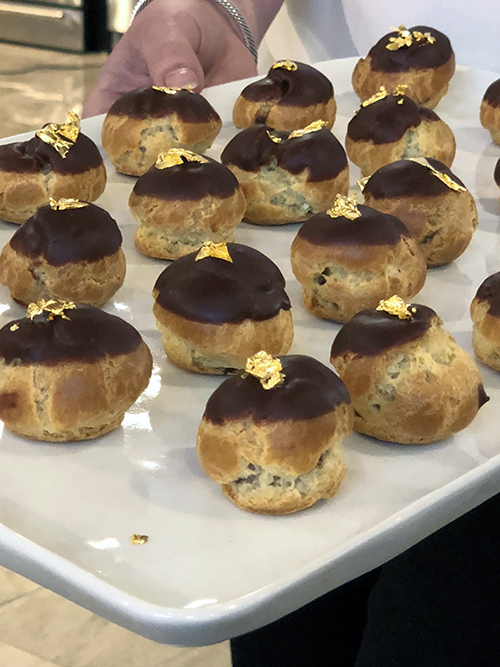 We each got one and as I bit into it, the velvety/creamy chocolate and ganache melted in my mouth. Freaking delicious!

Dessert was followed up with a raffle drawing. We had all put our names in. They raffled off ten cookbooks to be signed by him right then and there… the Bosch mixer that he used during the demo, which he signed, and a brand new Bosch dishwasher with installation. Heck ya! I won his cookbook – Good Food, Good Life – I never win anything, so that was super exciting. He signed that one – Dear Kathleen 🙂 and we chatted a bit more.

I was super giddy all night. He was so personable and I loved how he interacted with the audience in such a friendly, relaxed way – and not many people can say that Chef Curtis Stone almost choked them out in a cooking demo.

A fun evening with good people all around. It feels great to dust off the ol’ blog. The weather is getting nicer and I’m looking forward to more local events and creating and trying some new recipes.

Permanent link to this article: http://foodiddy.com/?p=11263