Let’s flashback to several months ago when my friend Kristen presented me with my birthday gift – Fabio Viviani’s (one of my chef crushes) new cookbook: Fabio’s American Home Kitchen. Inside the cookbook were 2 VIP tickets to the California Fig Fest in Fresno. The tickets read: Celebrity Chef Fabio Viviani – Catch Bravo Network’s most beloved Italian Chef at our main stage! Fabio Viviani will be cooking up a delicious fig-inspired recipe in a LIVE cooking demonstration. With his contagious humor and wit, you will not want to miss this event.

Nope – we were NOT going to miss this event. You see, in case you forgot from my post a year ago, Kristen purchased tickets for us to see Fabio in San Francisco, and I ended up tearing my ACL and meniscus, resulting in emergency knee surgery. I followed that with breaking a toe while on crutches. I had to skip the event, but lived vicariously through Kristen’s texts, videos and the photos she sent me. She also gave me a signed cookbook, so that was really cool. Now it was time to meet my chef crush in person, it was MY turn to drool over his hotness and sexy Italian accent.

I met Kristen at Starbucks around 6 a.m. the morning of the festival. I drove us to California State University, Fresno and we made it in plenty of time.

Our VIP passes got us a few perks. Early entrance  – that didn’t happen, they were a little unorganized – a canvas swag bag full of fig snacks, pens, note cards, recipes and some other stuff. We also got a wine glass, access to an air conditioned tent (it was 106 degrees, so that was the second best part) unlimited wine/beer and passed trays of fig inspired appetizers. The best part was a meet-and-greet with Chef Fabio. 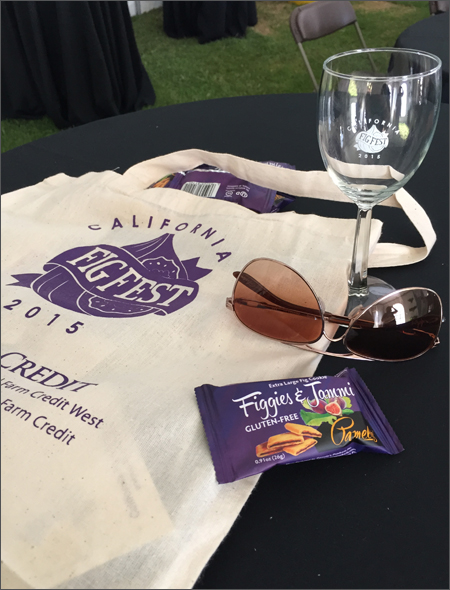 Once we got into the festival, we wandered to the food booth area. We had the opportunity to judge different fig inspired dishes from 20 local restaurants. They had REAL VIP judges for the more important awards. 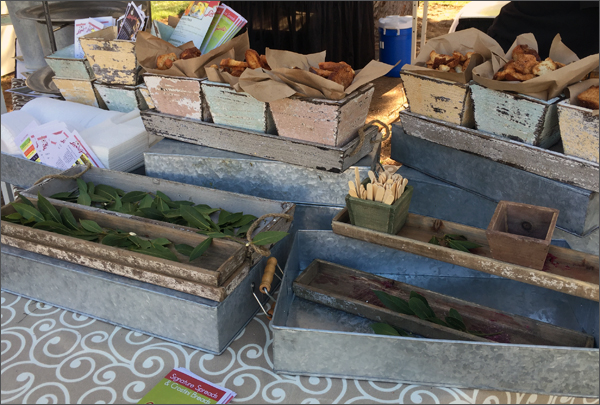 We loved the tablescape of the Love & Garlic booth. They ended up serving up a fig and walnut spread (dried figs, cream & goat cheese with walnuts) on a crostini. 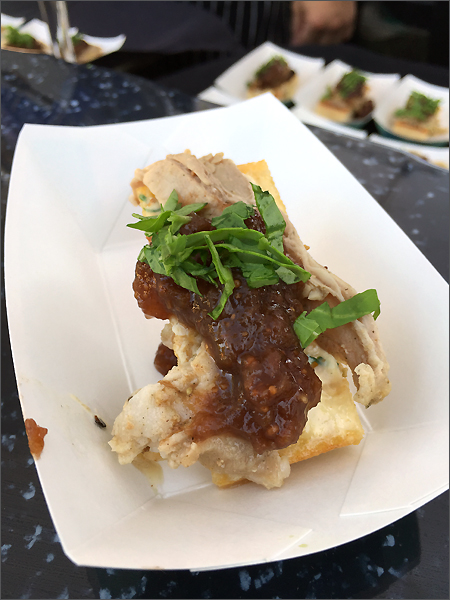 We sampled the Elbow Room Bar & Grill braised porchetta baguette with fresh fig compote, arugula aioli and fresh greens. It was one of my favorite bites of the day. They won 3rd place for People’s Choice. 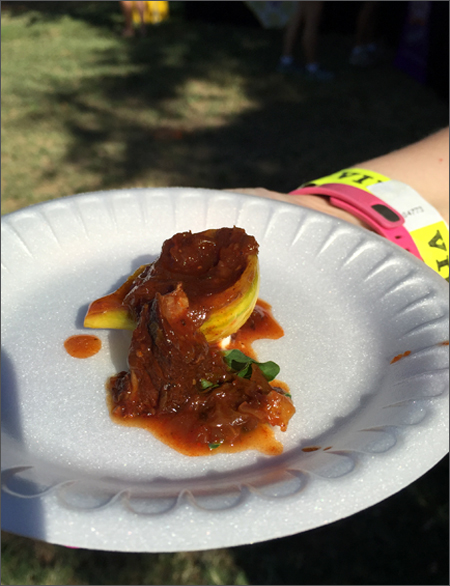 Next up was Erna’s Elderberry House Restaurant and their goulash in a fig cup. I was not expecting to like it as much as I did. The sweetness of the fig in combination with the acidity from the goulash was a successful pairing. 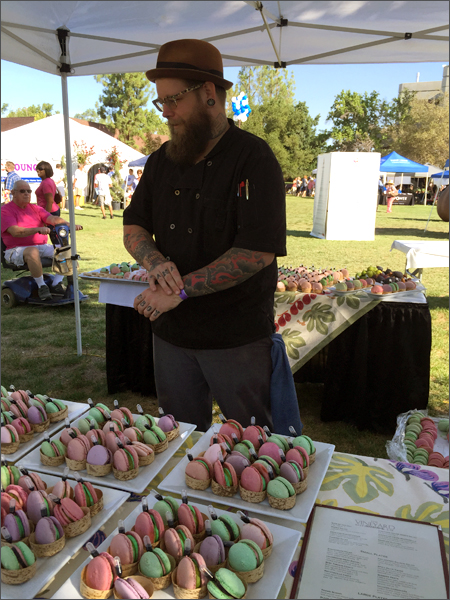 The Vineyard brought it home with their macaroons. They were the VIP Judges pick for first place. First place for the People’s Choice award went to the Painted Table’s crispy polenta cake with tomato fennel jam and figs. We didn’t get a chance to taste that one, bummer. 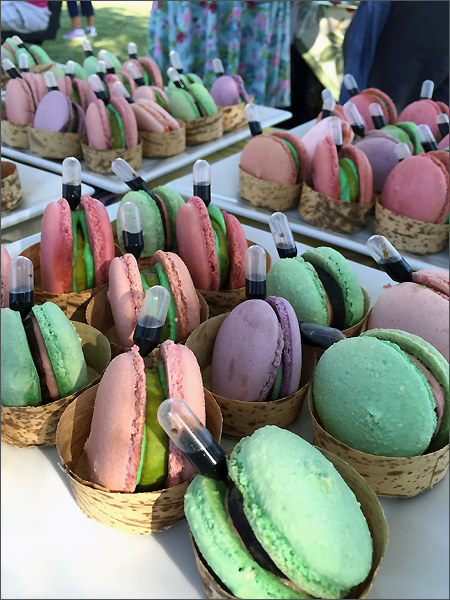 Fig and goat cheese mascarpone macaroons with local balsamic pipettes. I was SO obsessed with the pipettes, I texted Deede to share the photos. They purchased the pipettes through Amazon. 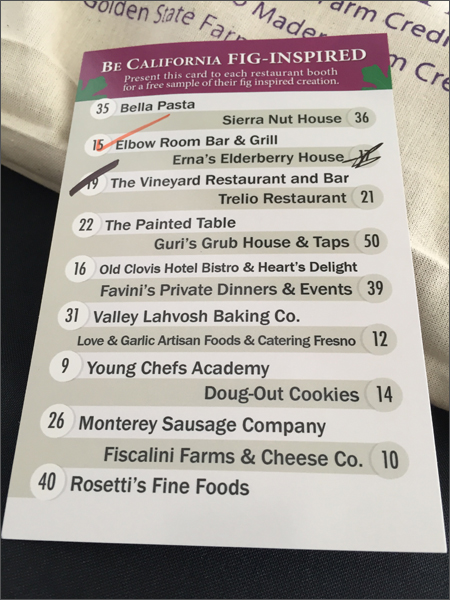 The vendors checked off our voting card and we headed over to the VIP tent to cool off. We had already seen Fabio near the main stage – Kristen got a chance to chat with him as I was too fan-struck to say a word. 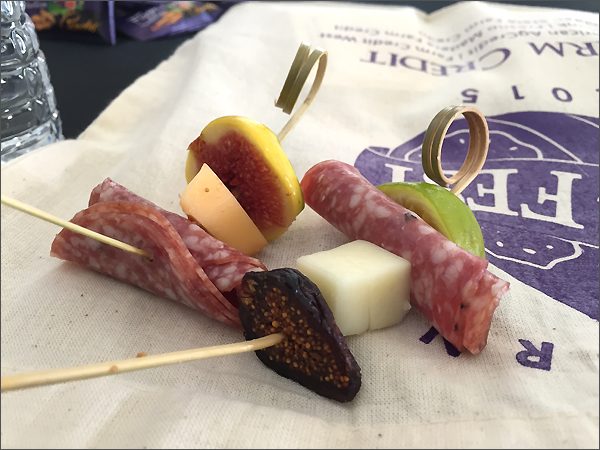 We enjoyed the first of the complimentary passed appetizers in the tent. Fresh and dried figs with salami and cheeses. 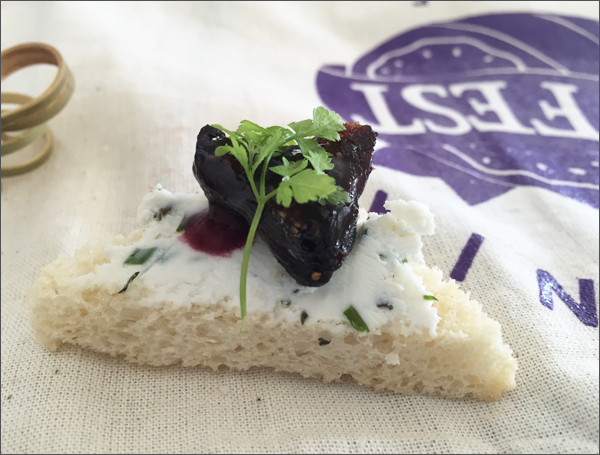 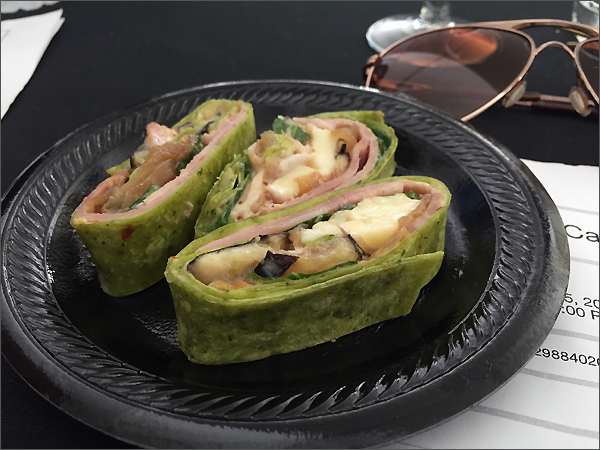 Fig, brie and ham wrap with caramelized onions. While the appetizers were keeping our taste buds entertained, we couldn’t help but notice that Fabio had entered the tent. The meet-and-greet started and Kristen and I jumped in line to get our photos taken and our cookbooks signed. 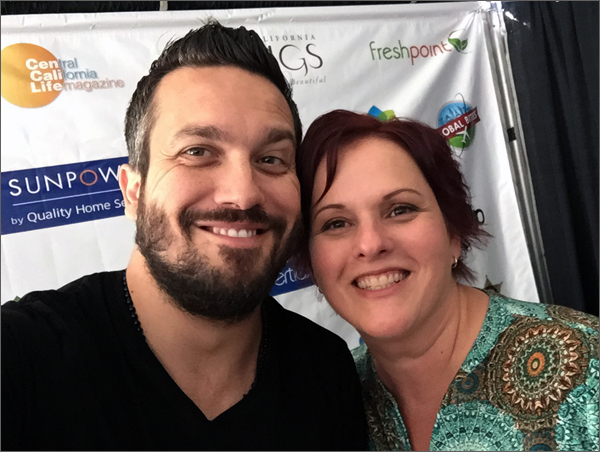 Fabio grabbed my iPhone to take a selfie and I about died. It was set to black and white and he laughed at my artiness. He took one photo, then switched it over to color and snapped a few more… then OUR FACES TOUCHED. LOL – Kristen could not stop laughing at how flustered I got. It was hysterical and my giddiness lasted the entire 3-hour drive home. You can currently find copies of all of the photos under my pillow. I texted the above photo to Dan along with “My new boyfriend – Fabio” and his response was – bring his money home! – haha. And this is why I married him. 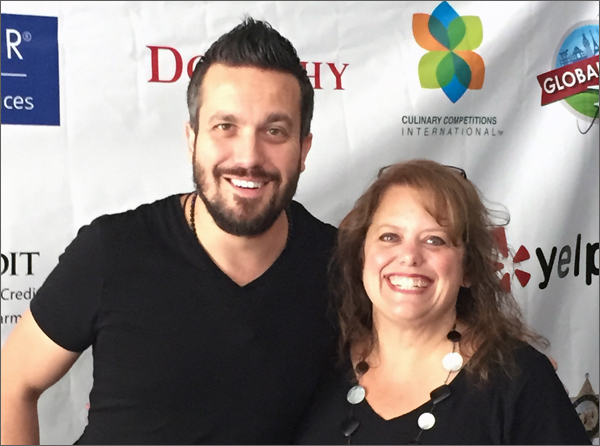 Kristen and Fabio wore matching outfits. Black v-neck tees and jeans. She would like me to believe that they planned that in advance. 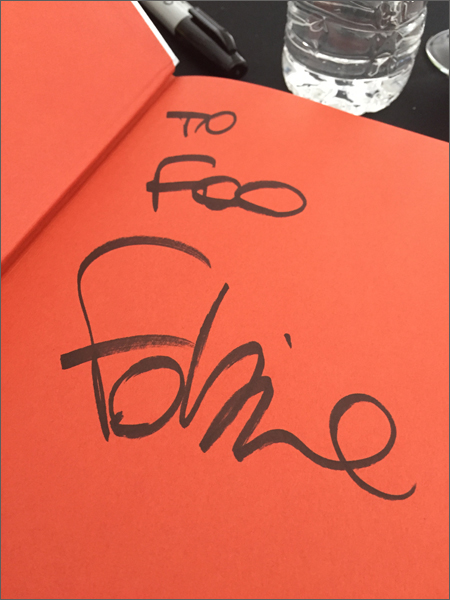 Achievement unlocked. I met another one of my chef crushes (Tyler Florence being another) and got my cookbook signed. Swoon! 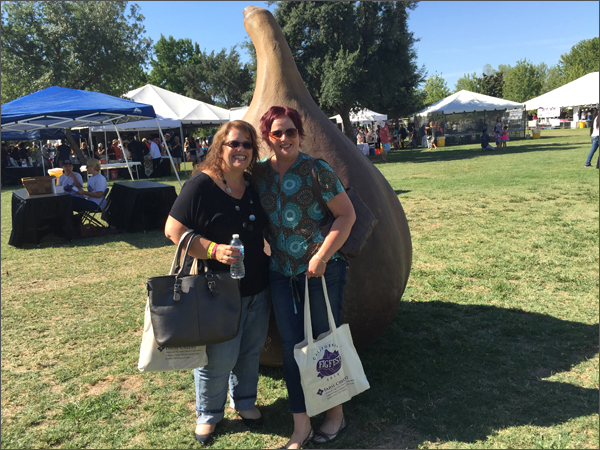 We left the tent and posed in front of the gigantic fig for a quick photo, then we made our way to the main stage tent to see Albert J. Hernandez – the Untamed Chef and his cooking demo. Translation – to get killer front row seats for Fabio. 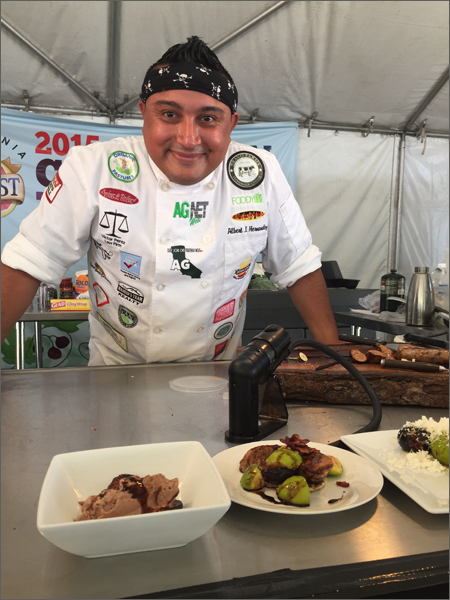 Albert’s chef coat was all Nascar’d up with his sponsorship logos. Kristen got to taste the chocolate, fig and port ice cream. We missed the other dishes, but enjoyed chatting with him after the demo. 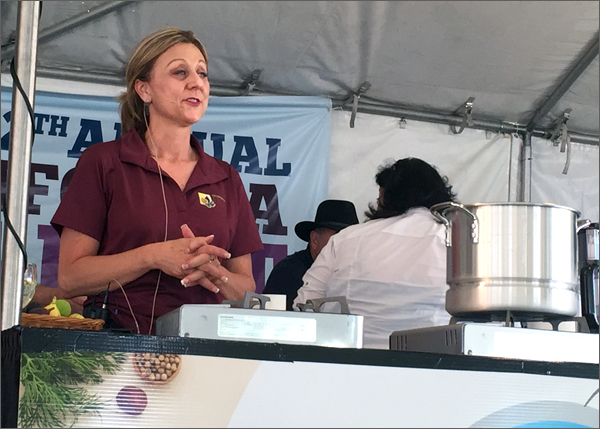 Next up was Figology 101 with Carla from the California Fig Advisory Board. She shared her wealth of fig knowledge with us. I really enjoyed the 30 minute presentation and learned a lot. This time I DID take notes. 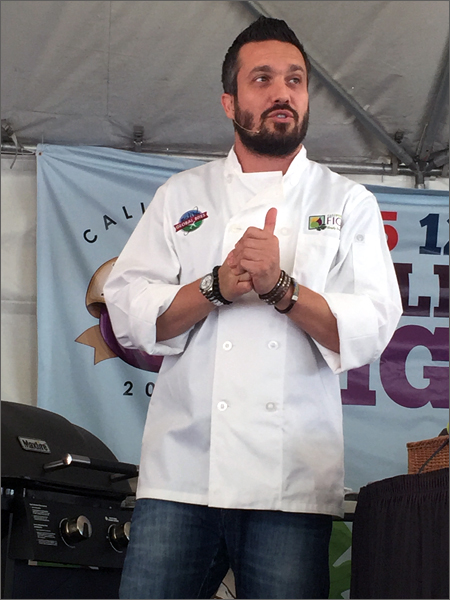 It was finally time for the main event – Chef Fabio’s cooking demo. 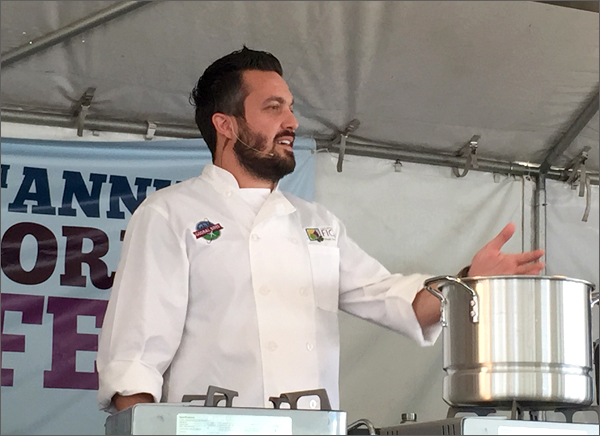 He was given a white Fig Fest chef coat and after 2 minutes, decided that there was no way he could wear it in the 106 degree Fresno weather, combined with the heat coming off his cooking station. 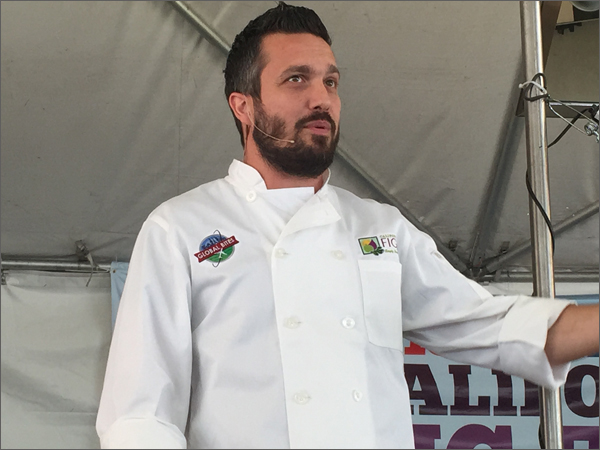 He took care of that real quick. 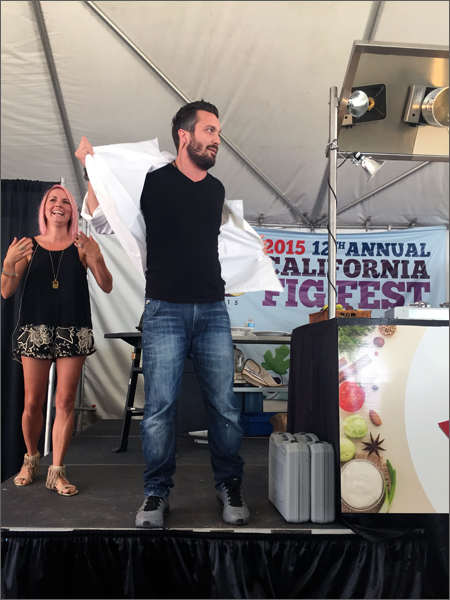 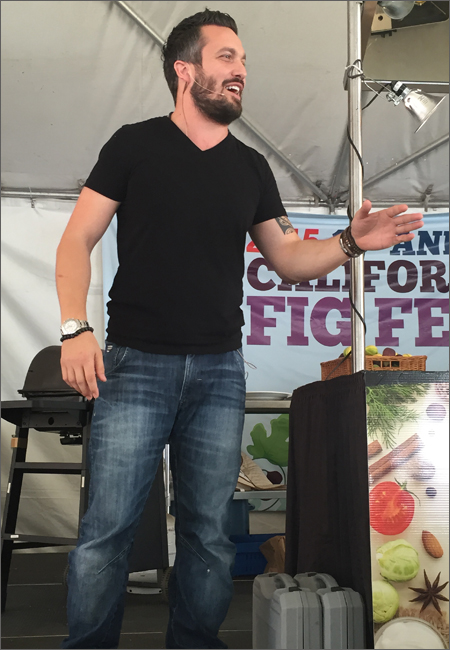 Kristen had mentioned that he really interacted with the audience during his San Francisco gig, but I had no idea how engaging and hilarious he was. He ranted about Americans and our obsession with kitchen gadgets – how we have drawers full of unused stuff that we don’t need, but bought because it was on sale. 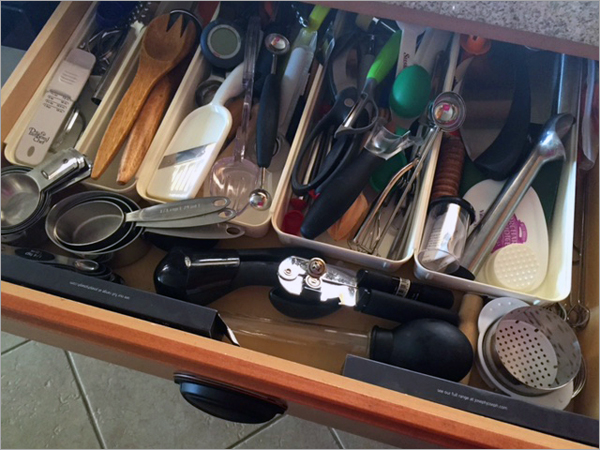 Visual evidence that I suffer from the “American obsession” – pretty sure I’ve NEVER used 1/2 of what is in my kitchen drawer. I do only have one drawer full of crap, so I guess that’s a plus. See anything you want?

He also asked…. how many of you buy ground pepper? He then stated that the only reason you should EVER use already ground pepper, is if you are seasoning a whole freakin’ cow, ha-ha. He had a similar take on garlic, before showing us the metal bowl trick that can be found all over the Interwebs. 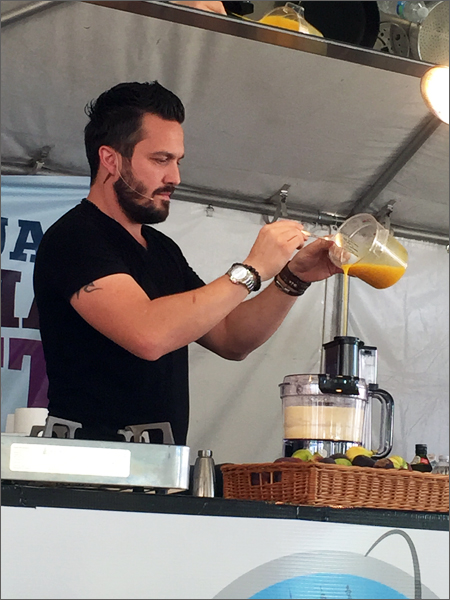 He walked us through the easiest way to make pasta, using a food processor and a blade attachment. He then said that he knows he’ll get a million questions on his facebook page or on twitter.

Can I use my Kitchenaid mixer? NO!

What if I use my mixer with the dough hook? NO!

Can I use a blender? NO!

A food processor with the blade attachment is THE ONLY THING to use if you aren’t making your pasta by hand.

He’s definitely not into measuring. He pointed out that eggs are different sizes, spoons are different sizes and if after you put in the egg yolks, your pasta is sticky, add more flour, 1 spoonful at a time. How big of a spoon? Whatever size you have.

Fabio made a cream based pickled fig sauce for his homemade orecchiette. I wish I hadn’t stopped taking notes because I already forgot all of the ingredients he used.

He also made a seared flank steak with a fig and frisee salad that included escarole, pine nuts, garlic and roasted peppers. The gal sitting behind us got to go on stage to help out. Fabio sent her back to her seat with the entire platter and chef knife. Then all things went to hell. People started asking for everything on stage. The food processor, an opened bottle of brandy, his chef coat, olive oil – he gave it all away and graciously signed everything for his fans. His publicist was laughing and the Fig Fest promoters were shitting bricks – taping the open brandy bottle shut, asking for the chef knife back due to safety concerns… it was pretty funny. 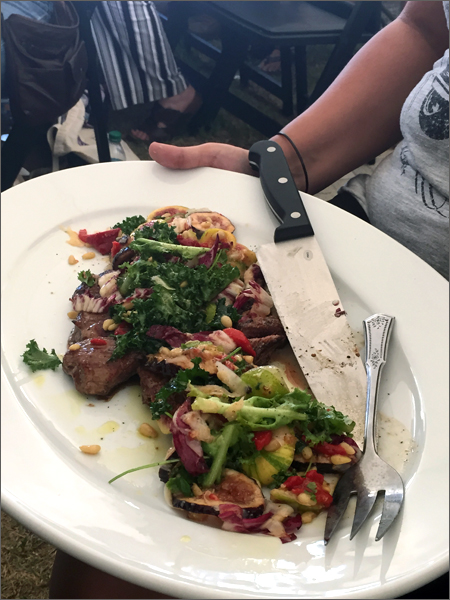 We had a FABULOUS time at the festival and shortly after I ended up receiving some fresh figs from a friend’s tree. I really need to buy some more. I want to try some of the new recipes that were included in our swag bags. Thank you Kristen for my awesome birthday present and thank you Fabio (because I’m sure he’ll read this – LOLZ) for making me giggle like a school girl.

Have you guys tried fresh figs? Got any recipes for me to make?

Permanent link to this article: http://foodiddy.com/?p=10442