So I got a phone call back in July from my friend Kristen… it went something like this. So do you think you will be up for a little adventure on August 2? My response was… I’m not entirely sure. You see, I had emergency knee surgery in early July. I was doing yard work and ended up with a bucket tear in my meniscus (locking my knee) and a partial tear of my ACL. Luckily they were able to repair things during the surgery and I just ended up on crutches with a full length knee brace and a lot of pain.

Kristen shared that she had gotten us tickets to see Chef Fabio Viviani at Eat Drink S.F. I was a HUGE fan of his on Top Chef and followed him on Life After Top Chef. I also loved when he was a guest on the Chew.  I decided to say “yes” to Kristen because it gave me something to look forward to. As the weeks ticked by it was looking more and more like my body wasn’t cooperating with the timeline – especially after adding a broken toe into the mix.  I had a crutch accident and slammed my foot into the door jam. So after that and not being able to walk at all – I knew the trip was out. I made the call and told her to invite another friend… and it CRUSHED me to have to miss out.

Well… Kristen decided that she would go to the event alone and give the ticket away to someone once there – it was a sold out show. 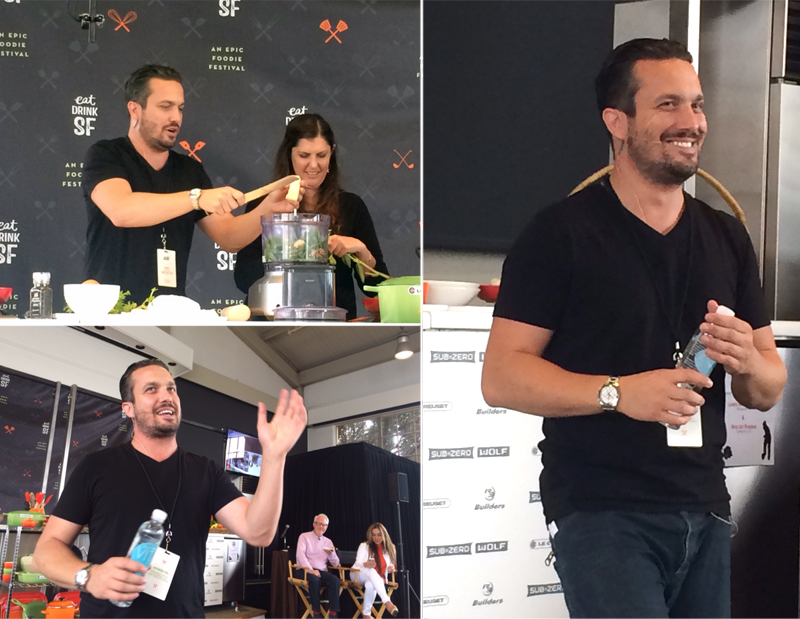 She had a blast. She texted the above photos and I got a play-by-play once she returned home. Sounds like I missed quite the event. Kristen then shared that she wanted to make some recipes out of his cookbook “Fabio’s Italian Kitchen“ and that she would come over to my house and cook while I assisted from a sitting position. I was SO TIRED of eating frozen food, I jumped at the chance to create something delicious. I had not cooked or been out to eat in 7-weeks – Heck, I’d only been out of the house a few times and that was for Doctor appointments and physical therapy. I was craving Italian food big time. 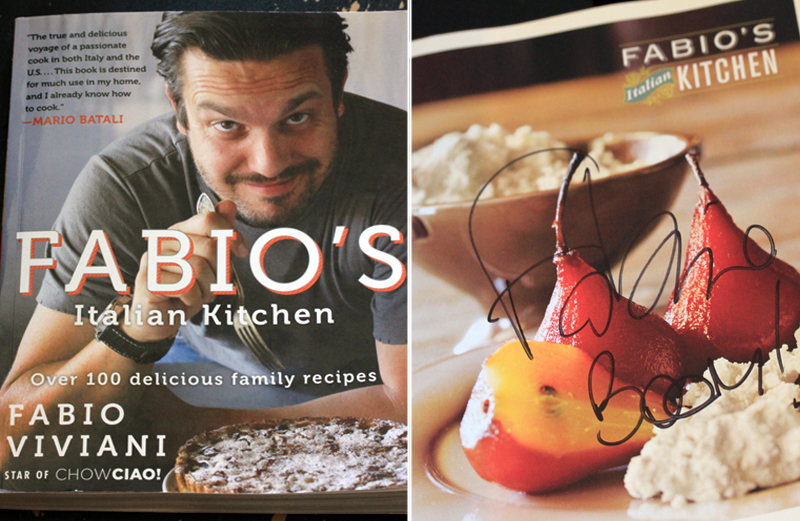 Not only did she bring all of the recipe ingredients – she surprised me with a signed cookbook. I would have jumped up and down if it hadn’t been for the crutches, leg brace and ugly broken toe shoe I was wearing. Sweetest gesture ever… I have some awesome friends, that’s for sure.

It was time to get to work. The hardest part was prepared by Kristen the day before. She made Fabio’s Tomato Sauce with Oil and Garlic – Pomarola and Fabio’s Grandma’s Meat Sauce – Sugo di Carne della Nonna – which takes 6-8 hours to cook. He begged the audience to make his Grandma’s meat sauce – told everyone that it was worth every minute – so Kristen was up for the challenge. She even snapped a few photos from her own kitchen… Love that girl! 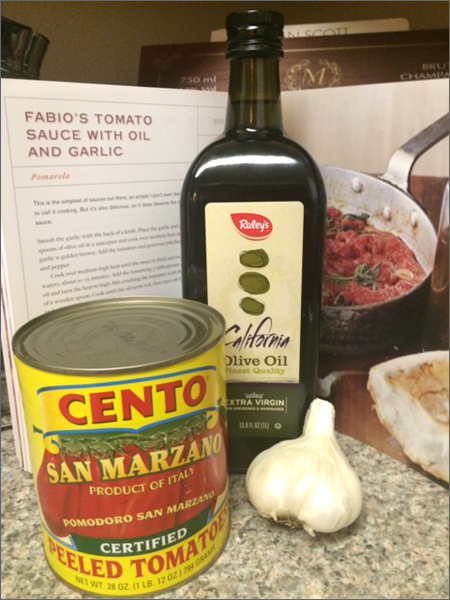 Start by cooking 5 tablespoons of the olive oil and smashed garlic in a saucepan over medium heat until garlic is golden brown. Then add the tomatoes and a generous pinch of salt and pepper. Cook over medium-high heat until the sauce is thick and no longer watery. Add remaining 3 tablespoons of olive oil and turn the heat to high… stir, crushing the tomatoes with the back of a wooden spoon. Cook until the oil turns red, then turn off the heat and add the basil at the very end.

Next up was Grandma’s Meat Sauce recipe which called for using 2 cups of Fabio’s tomato sauce. 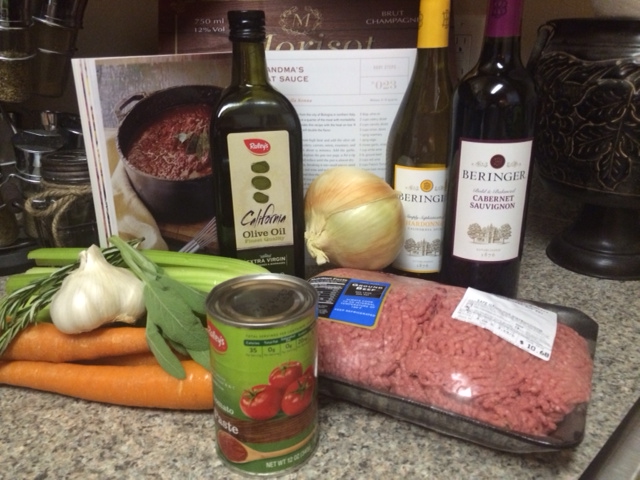 I got several phone calls as the sauce bubbled away on Kristen’s stove. One explaining how wearing a white shirt without an apron was a bad idea, the next was to tell me how amazing her apartment smelled. 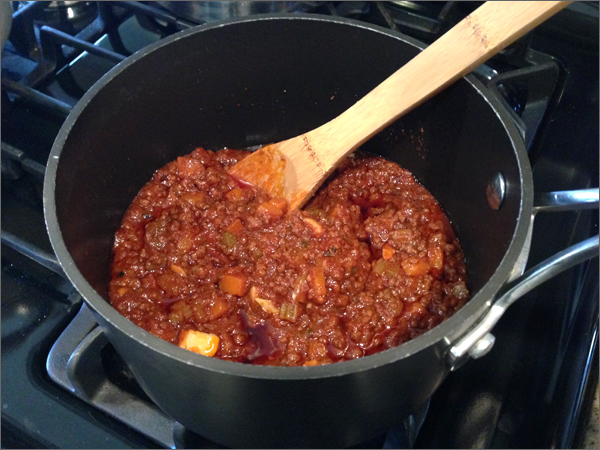 It’s definitely worth purchasing the cookbook for some of Fabio’s authentic family recipes. I wanted to link to the recipe online, but couldn’t find it anywhere… so hit me up through email or in comments if you are dying to try it. 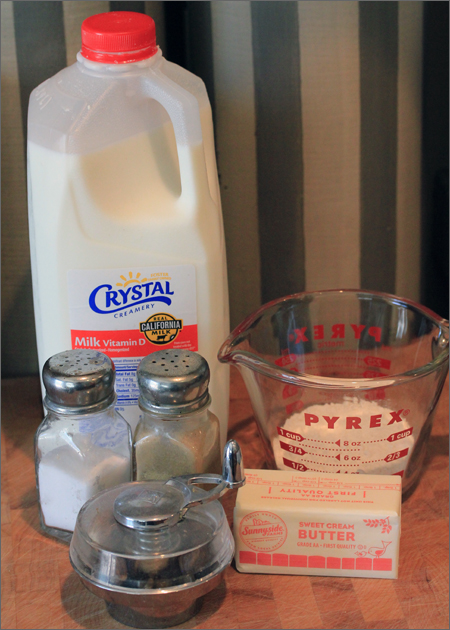 Fabio’s Béchamel Sauce was next on the list to make. 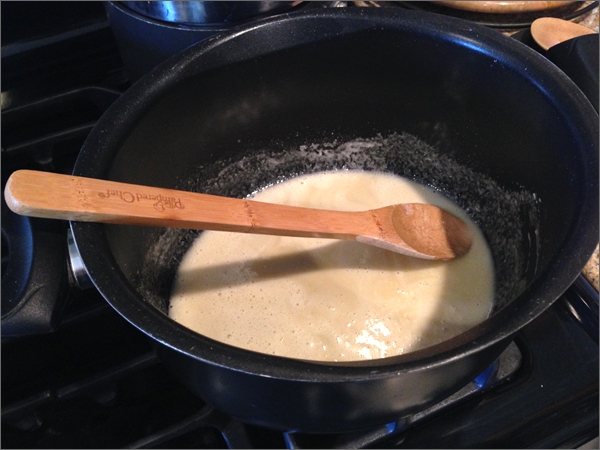 All three recipes were part of the bigger picture recipe – Fabio’s Baked Ziti – which for us became Fabio & Kristen’s Baked Mostaccioli – since the grocery store didn’t have any ziti pasta. 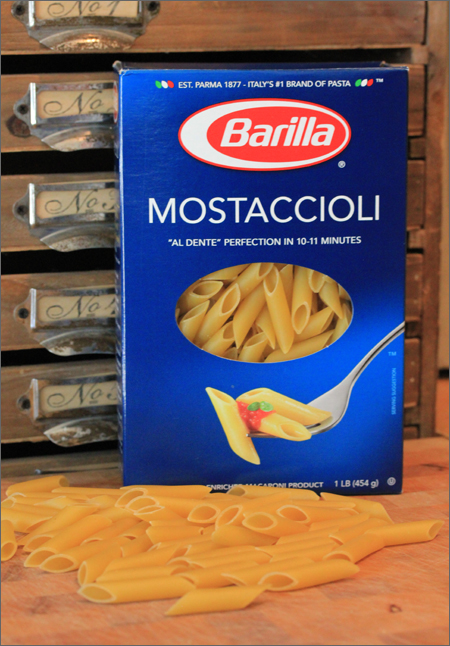 We poured the meat sauce over the cooked pasta and then added in the béchamel and other cheeses. Since we weren’t cooking it right away, we ended up baking it at 350 degrees instead of just placing it under the broiler until golden brown like the original recipe suggested. 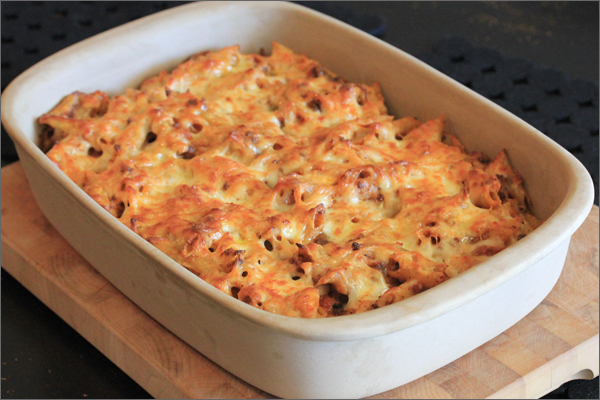 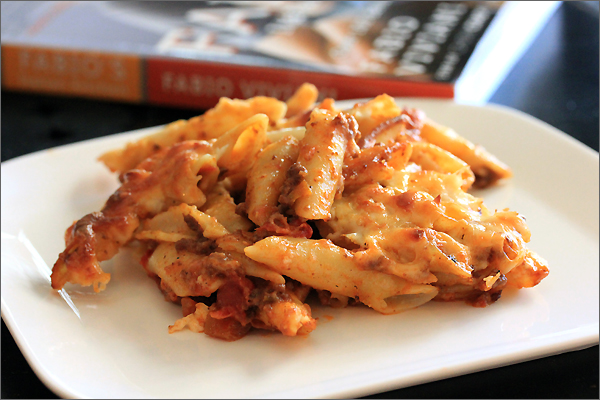 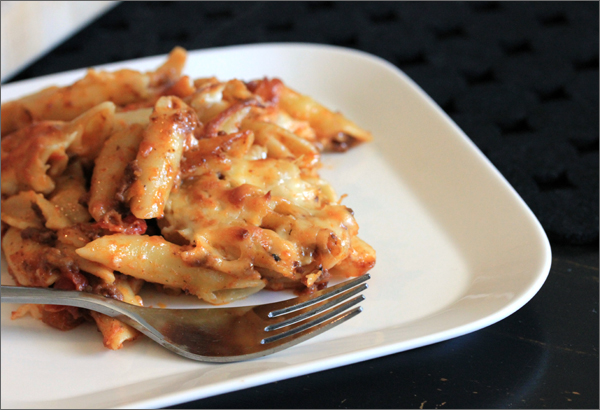 Our thoughts were expressed in the ingredient list above. The added sauce and béchamel would have really helped the dish. We also decided to broil it a bit after baking so it could get a little golden brown on top – we might have broiled it a tad too long – the cheese got really crispy, rather than bubbly/creamy. That all didn’t matter much because the flavor was amazing – the meat sauce was incredible and while next time I might not go to all the extra steps of making Grandma’s Meat Sauce like Kristen did – it sure was a special treat after having lived off frozen dinners and sandwiches for weeks on end. 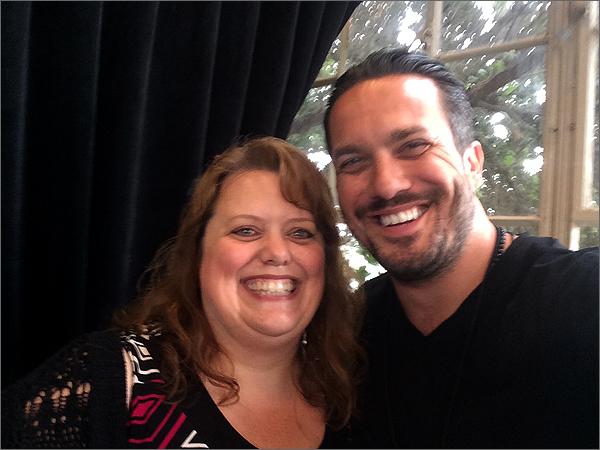 Had to include Kristen and Fabio’s selfie. Thank you Kristen for everything. A big hug and thumbs up from your new BFF Chef Fabio and your old pal Foo. 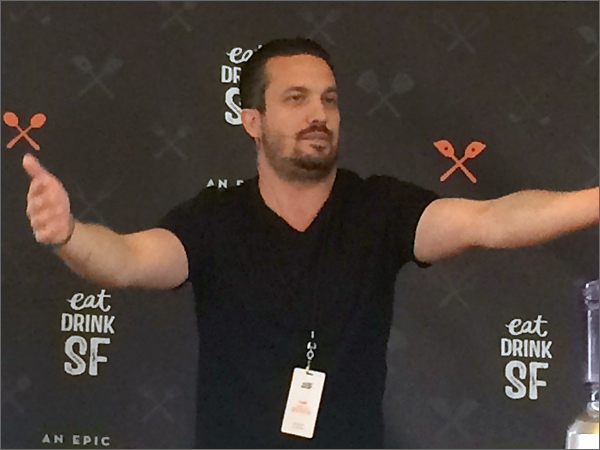 From the awesome photos, to the signed cookbook, to picking up the ingredients, slaving away in your own kitchen and massive clean-up duties, you really lifted my spirits. I can’t thank you enough. Looking forward to a future trip to Southern California where we can hit up Fabio’s restaurant – Café Firenze, for a cooking class or perhaps for some Chef’s Table dining…since he and Kristen are buds now.

We also managed to make a delicious soup and fit in a Hallmark movie while I iced and elevated… good times indeed. The soup recipe will be coming soon!

Permanent link to this article: http://foodiddy.com/?p=10001