I talked about Paul and Tom in my Bánh Mì or Bust post back in May. They got me hooked on Lee’s Sandwiches in San Jose, CA by introducing me to their grilled pork Bánh Mì. On my most recent visit, Paul and Tom thought it would be fun to explore other Bánh Mì options in the area. Tom noticed a while back that a dry cleaners in Santa Clara had split off into a sandwich shop. The ladies that run the dry cleaners, also run the sandwich shop. Paul was pretty skeptical, but we ultimately decided to check out Yelp to see what others thought of the place. After reading many positive reviews, we added it to our list. 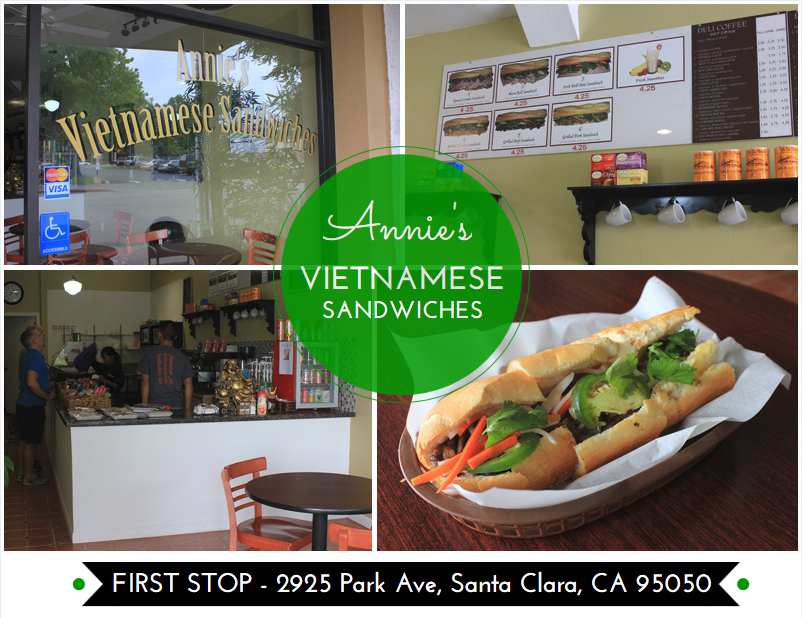 We weren’t sure if ordering a single sandwich cut into three pieces would go over well. They were all very accommodating as I snapped photos like we had just purchased a masterpiece. That description was not far from the truth. The pork was tasty, the juices soaked a bit into the bread – the bread was wider than others I’d previously had, crunchy on the outside and very soft on the inside. The carrots, daikon and onion pickling was good and the cilantro, cucumber and jalapenos were pretty evenly distributed. We were all pleasantly surprised at how well balanced it was, Tom felt it was a good symphony of flavors and I would have to agree.

We all commented about how hard it was to just have a third of a sandwich before moving on to the next place. We all wanted more. We jumped back in the car and our iPhones took us to our next destination – Thanh Houng Sandwiches in San Jose, CA.

There was plenty of seating, the World Cup was on TV and the place was very clean. We received friendly counter service when we ordered another grilled pork sandwich to be cut into three pieces. While waiting I noticed that they had baskets of bread and all the ingredients for you to purchase items “to go” to make sandwiches at home. That was cool. As for the Bánh Mì… the pickling was weaker than Annie’s and the meat wasn’t as flavorful. The bread was definitely crispy on the outside and soft on the inside, but the balance of flavors was missing.

Back in the car we went. Next up was Phat Tri – this was definitely an entirely different experience. 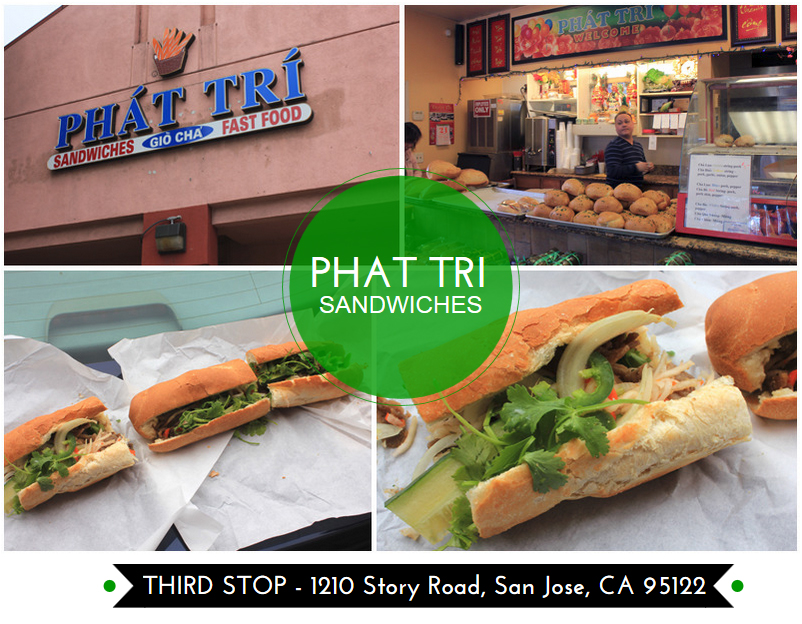 Phat Tri is located in a fairly run down plaza. Parking was tight and there was no where to eat inside or outside. We walked through the doors and were a bit overwhelmed by the smell of incense. The place had packaged food on every flat surface, waist high throughout the shop. Freezers and refrigerators contained meats and a variety of other fresh and frozen products. I placed our order – one grilled pork sandwich. It only took a few minutes. $5 later and we had a bag filled with what looked like three separate sandwiches. We had read yelp reviews that talked about the sandwiches being large – 10 inches… but they generously gave us a sandwich and a 1/2. We ate our sandwiches on the trunk of Tom’s car – this wouldn’t be the only time this happend, ha! We all took our first bite and immediately noticed that the pork had a slight curry flavor to it. We noted that it was salty and sweet at the same time. The pickling was good, the cucumber slices were a bit thick, but overall we liked the sandwich. This place definitely won for best bargain. The Yelp reviews were right, you get a lot for the money. We still had two more places to go, so we each wrapped our halves and headed out to destination number four – Duc Huong, also on Story Road in San Jose. 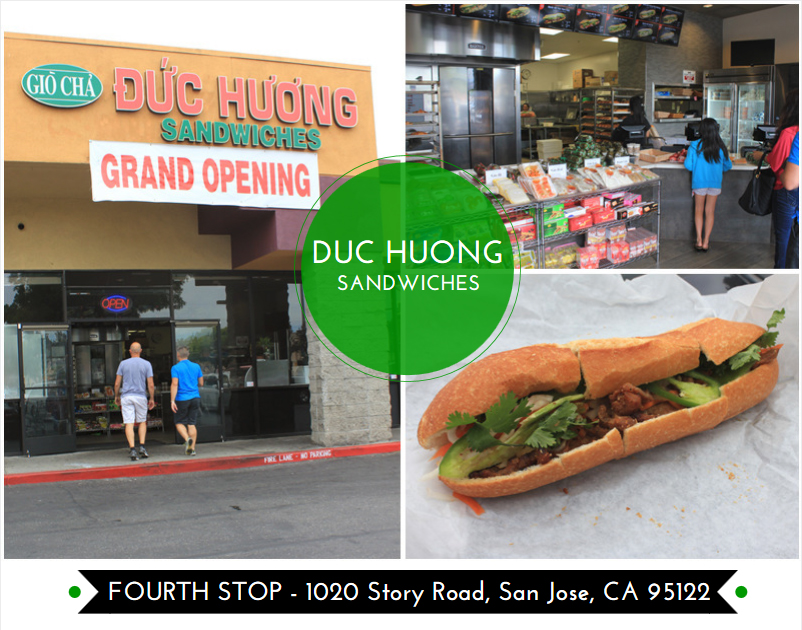 Duc Huong was one of the Sacramento places I tried, so I thought it would be fun for Tom and Paul to experience what they brought to the table. The shop was new and very clean inside. It was a walk-up counter with no indoor or outdoor seating. We ordered the grilled pork and once again ate on the trunk of the car. The bread was amazing… Tom’s favorite of the day. Really crunchy on the outside and soft in the middle. The meat was seasoned well and ended up being Paul’s favorite of the day.  The rest of the sandwich was pretty well balanced and very close to the Sacramento version I had back in May. The true test was comparing the first four places to our fifth and final stop – Lee’s Sandwiches. We knew we already LOVED Lee’s – so we wanted it to be the last place for the comparison. 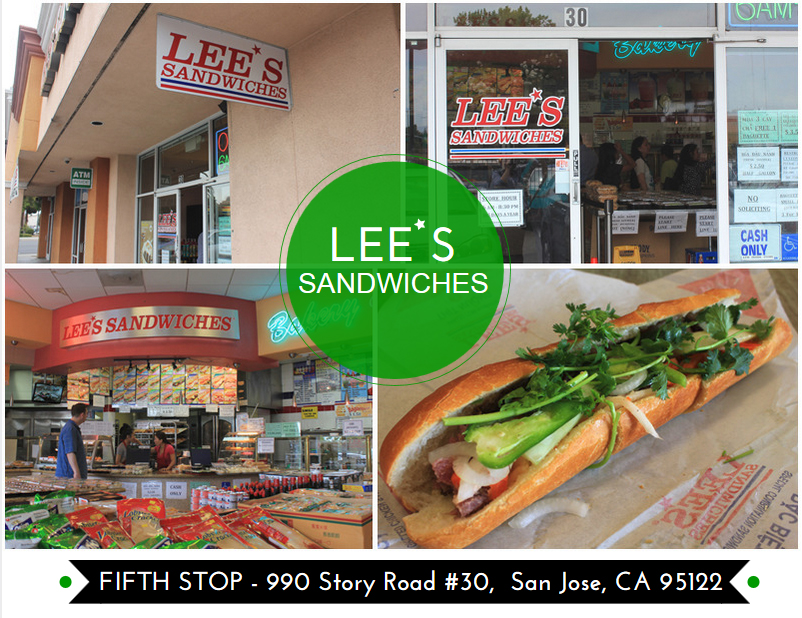 Lee’s had plenty of indoor seating. We were greeted by friendly staff and you would think after four places, we would just order another sandwich to split. Nope, we got an additional one for later snacking. We busted open the first one and all three of us let out a good food sigh and agreed that it still held the winning title of best Bánh Mì for all of us. Sure it’s a chain, but the bread to filling ratio and overall flavors are perfect. Not to say the other places won’t be in the running if in the area, especially Annie’s for me.

The day was awesome, the visit was so much fun and I feel like I now need to conquer making Bánh Mì sandwiches at home. I know Tom and Paul have a good recipe, so I might just have to start there. Thanks guys for the great blogging adventure and for navigating us through my old stomping grounds. Looking forward to my next visit already.

Permanent link to this article: http://foodiddy.com/?p=9970