All the marbles… and memories…

I had the opportunity to meet Guy Fieri at his new Johnny Garlic’s restaurant on Arden Way in Sacramento, CA. Johnny Garlic’s hosted a book signing promoting his latest edition of “Diners, Drive-Ins and Dives: The Funky Finds in Flavortown.”

Now you either love Guy Fieri or you love to hate Guy Fieri… I personally enjoy his Diners, Drive-Ins and Dives show and have found myself in several of the restaurants he has profiled. I also love that my 11 year old niece is a big fan and it’s a show she and her family can enjoy together. I jumped at the chance when my friend Kristen extended an invite. 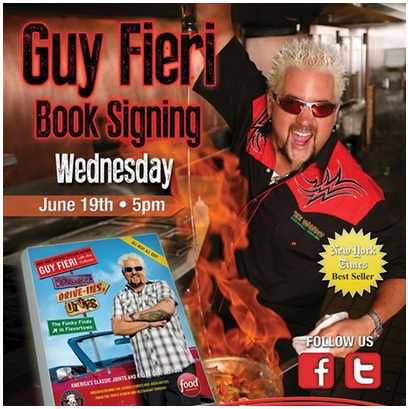 I think it’s cool that Guy is an alumni of our local American River College’s culinary arts program (according to Sacbee) and that he’s highlighted quite a few restaurants and dives in my area. I have watched Guy’s Big Bite a handful of times, and I watched him on Rachael vs. Guy: Celebrity Cook-Off and The Next Food Network Star. I’ve watched The Next Food Network Star every season since Guy won. My favorite on the show this year is Chad Rosenthal, the BBQ guy – and I’m so damn happy that Danushka went home last week – couldn’t stand her on Chopped and nothing changed with her being on The Next Food Network Star. I wish Viet Pham would come out of his shell, his food fascinates me. So yes, still addicted to most shows on The Food Network. 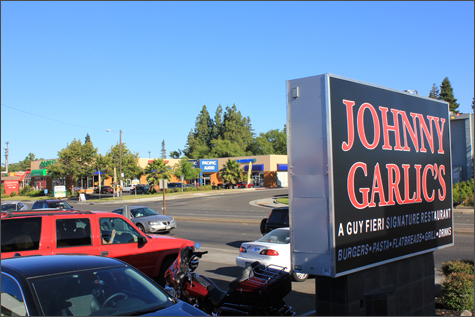 We arrived at Johnny Garlic’s and got a great parking spot. 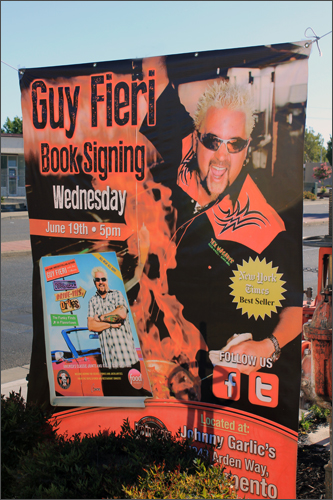 We quickly purchased our books, got our numbered tickets and then grabbed a table to order. 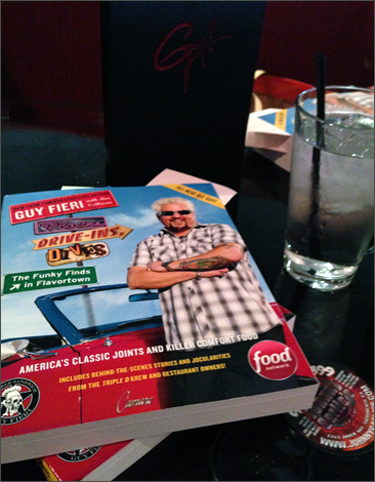 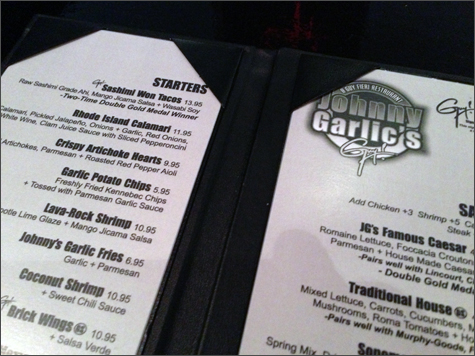 The menu had everything from garlic fries to the Hunter’s Creation for the evening – several antelope specials. 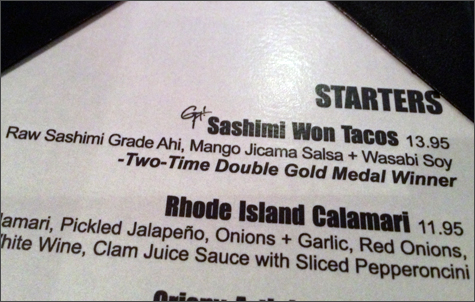 I ordered a starter as my main meal – The Sashimi Won Tacos – Mango/Jicama Salsa combined with Raw Ahi Tuna, they were delicious. It should be known that I’m a huge raw ahi fan, so there’s that to take into consideration. Kristen ordered the Black and Blue Burger – Blackening Spice, Stella Blue Cheese, Lettuce, Tomato, Onion and Donkey Sauce. We both made great choices and were happy with the service and our meal. In case you were wondering…

Mix the mayonnaise, roasted garlic, mustard, Worcestershire, salt and pepper together until smooth. 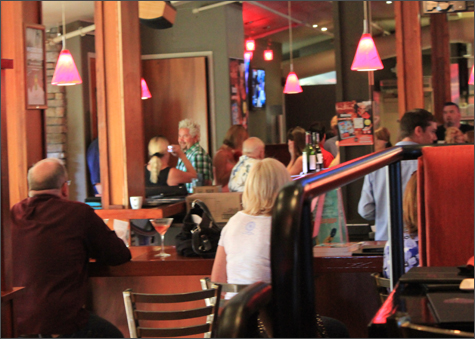 Guy came in through the back door to the kitchen and he made his rounds to some VIP’s awaiting his arrival. 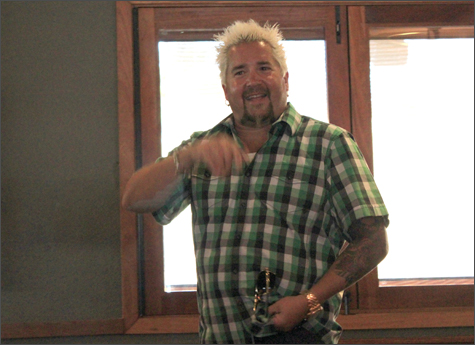 I snapped photos like a paparazzi and then we made our way to the book signing/meet and greet area. 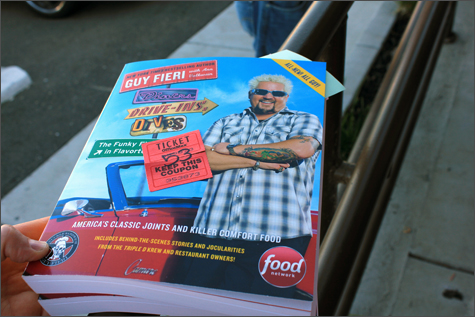 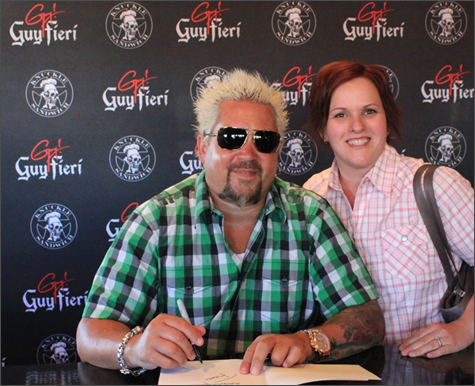 He was super cool and complimented me on my hair and then he said… “Foo!” – I love it! 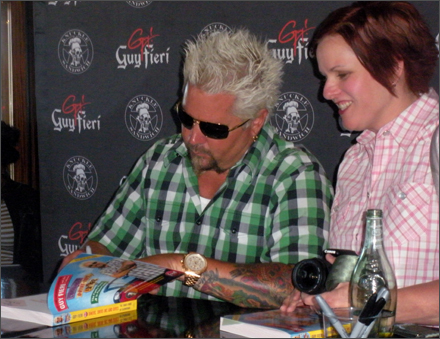 I told him “Foo” was a nickname and about my food blog and then he signed my book and one I had gotten for my brother and his family. I was a total foodie nerd and clearly excited in the above photo, LOL. Thanks Kristen for taking photos. 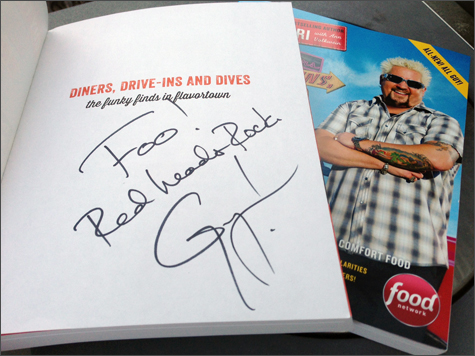 My signed book… and  YES, red heads do ROCK!… even if the red is not real. Thinking he can relate to the whole “not real” hair color thing.  🙂 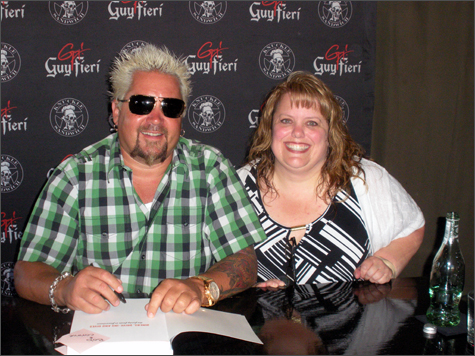 He chatted with Kristen and signed her books right before it was my turn. I snapped a million photos, but the best one was taken from staff with her very own camera. 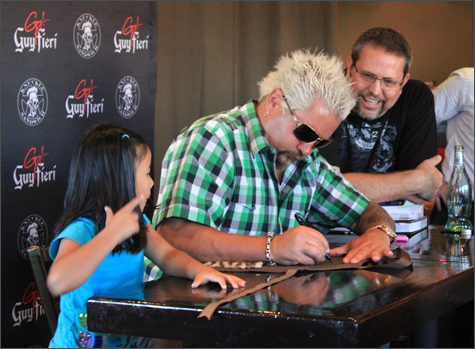 One of the coolest things was Guy’s interaction with this little girl. She was a huge fan of his show. They fist bumped and he wrote and drew something special for her on the tiny brown apron she brought with her. I know there were stars involved… she was grinning from ear to ear, it was adorable!

Such a great event. It was fun talking to his “super fans” and I’m grateful that we had the opportunity to meet him. I will definitely be going back to the restaurant to try other items on the menu and I will continue to try some of the Diners, Drive-Ins and Dives highlighted in the book and on his show.

Permanent link to this article: http://foodiddy.com/?p=8766