All the marbles… and memories… 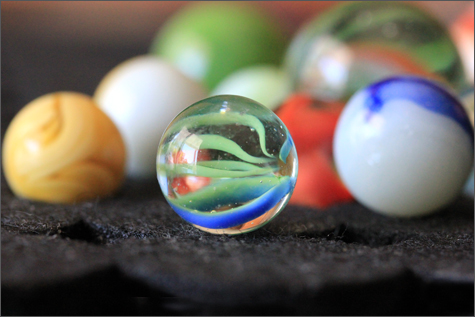 I’ve been fascinated with marbles for a long time. My Dad had a big bag of marbles that he played with in the 1940’s – some were very beat up from hours and hours of play, others were in perfect condition. I remember sitting on the floor of my childhood family room using one of the big steelie marbles to crash into a pile. I never really took the time to learn how to play marbles correctly, I just loved looking at the colors and designs. 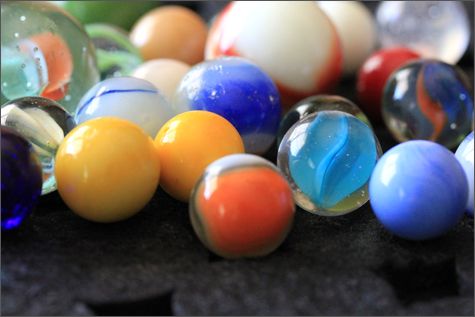 My late husband Ace had a pretty big collection as well. I knew there was a bag stashed in a box in the office closet of our apartment, but I never really gave it a second thought until after he died. I decided our apartment needed more color after his death and I wanted to smile at all the color when I walked through the door. While my insides were dark and dreary, I wanted to surround myself with bright, pretty things.

I ended up purchasing a square glass dish from Pier 1 Imports and filling it with the marbles and placing it on the back of the bookcase behind the sofa. It was right by the front door and it did indeed make me smile when I walked through the door. Not only was it a reminder of him, the colors mirrored the super colorful artwork I had filled the apartment with.

One late night, about 1.5 months after his death… I was walking by the office and a distinct electrical burning smell was coming from the office computer. I freaked out… this was so “out of my comfort zone” – I immediately called our friend Stew. I remember crying on the phone because it was just another reminder of all the things Ace took care of during our marriage. 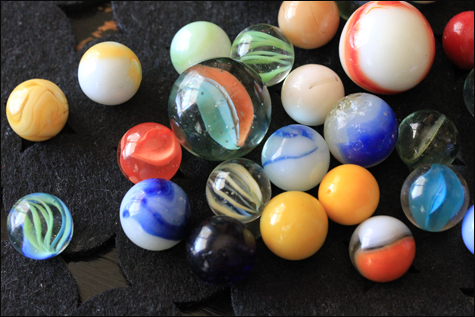 Stewart came rushing over and it turned out  it was the computer’s mother board – it was fried. I just felt so defeated… really? what else could go wrong? I had no money, the computer was my lifeline to the online widow support forums and other grieving friends… It was too much.

Then, Stewart randomly grabbed the dish of marbles and we sat on the apartment floor and played. He set up the circle drawing a pattern in the carpet and through tears, we reminisced about Ace, I learned how to play marbles, we hit marble after marble with our shooters and next thing you know it was 3:30 a.m. and my tears had turned into gratitude… gratitude for being surrounded by dear friends that would come running over to help and comfort me during a very difficult time in my life.

So… this brings me to why I wanted to create something to showcase marbles that belonged to Ace, marbles that I had collected over the years since Ace’s death and marbles that my Dad played with as a child.

I had been waiting in line at the grocery store and I picked up a copy of Better Homes and Garden’s Special Edition – 100 Ideas, Flea Market Style – decorating with yard sale finds. I flipped through it and happened upon a photo of a gumball machine filled with marbles… that was it! Operation, I must purchase an old gumball machine was underway. 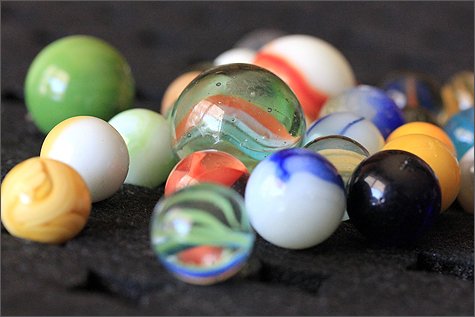 Aaron and I looked at the antique fair, I searched Craig’s list and several different garage sales and thrift stores. I was casually searching and then decided to look at eBay, even though I really didn’t want to pay for the shipping. They were all over $100. We had a gumball machine growing up and my parents still have it on display in their game room… so I thought I might be able to convince them that I needed it. Turns out, my Mom and Dad are very attached to their gumball machine, LOL.

Aaron and I found several on our last trip to the Sacramento second Saturday antiques under the freeway event we’ve been frequenting the past year. They were all over a $100 and super vintage with advertising on the glass. I was more interested in a round, clean look… the rectangular shaped ones were cool, but I hadn’t found the right one.

A week later,  I got a text from Aaron’s girlfriend Carolyn telling me that she found a cool gumball machine at the Folsom Antique Fair… I was super excited, until I realized she had found it for herself :). She had walked through her front door to show Aaron and he said, “Cool, you found Kath a gumball machine!” – her answer, Kath? Um… didn’t know she was looking for one. Laughter ensued and then she said… Yep, apparently I found Kath a gumball machine. Keeping in mind, Carolyn is truly one of the sweetest people I’ve ever met… I was not going to be taking her “find” – she had even talked the person selling it down to $35 with the stand! SCORE!

Shortly after that, Aaron and Carolyn were slated to have dinner with us. They showed up with the gumball machine to surprise me. Best. Surprise. Ever!

Within 15 minutes, we had it taken apart and filled with my marble collection. 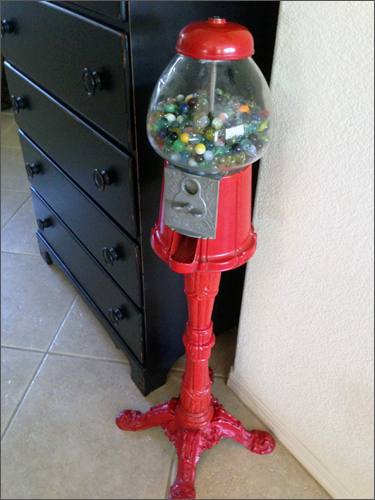 I loved it! But… I wasn’t so sure about the bright red color… I left it in place for a few months. I wanted the marbles to be the “star” and I felt like the red took away from their individual uniqueness. Then I decided that I wanted to paint it. I watched a video on You Tube to get started – How to disassemble your gumball machine. Once I learned how easy it was, I got some paint. 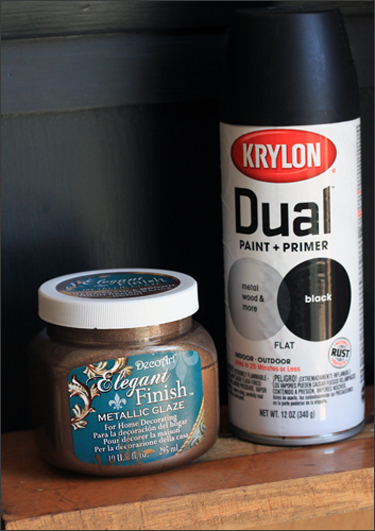 Carolyn and I went to Joanne’s and decided on DecoArt Metallic Glaze in Renaissance Brown. I used a 40% coupon and spent a whopping $3.50 on the glaze. I already had the flat black spray paint with the built in primer from another project. 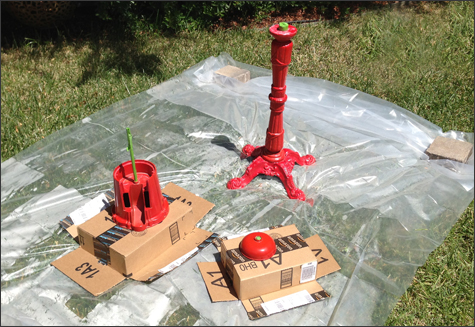 Thank you Amazon for the boxes I used to raise my gumball machine parts for painting. This is where I stopped taking photos, guess I really got into the painting. 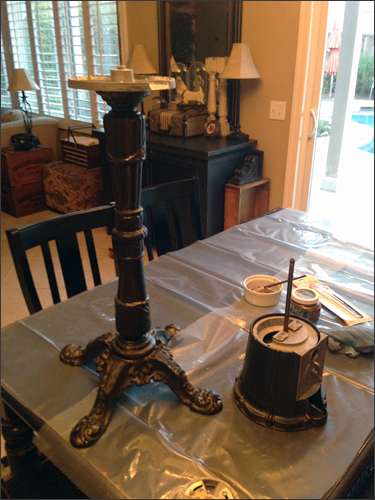 The bronzing began… I used an art brush and a microfiber cloth to wipe off the excess. 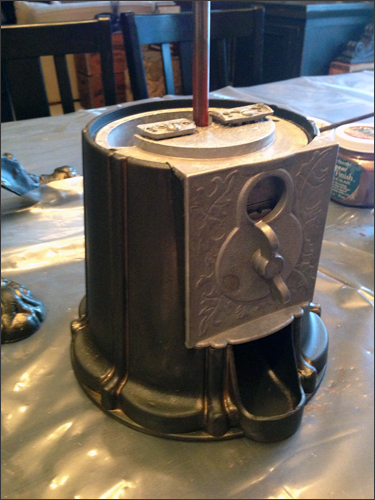 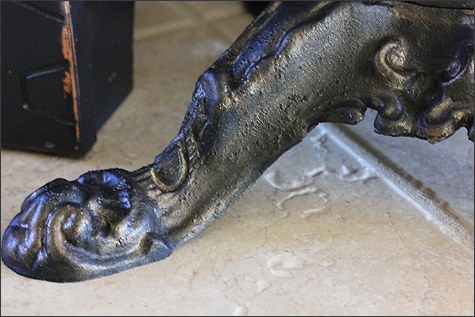 I was so happy with the results! The bronze glaze is very subtle and really cool in person. My Mom and Dad sent me home with a bag of my Dad’s marbles on Father’s Day, so the gumball machine is a little fuller in some of the more recent photos, like the one below. 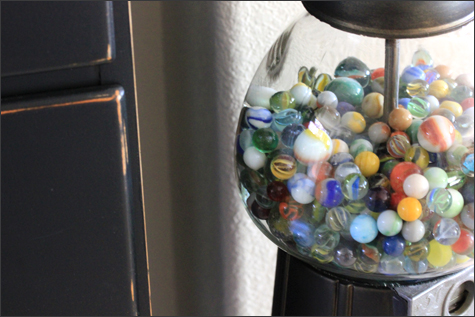 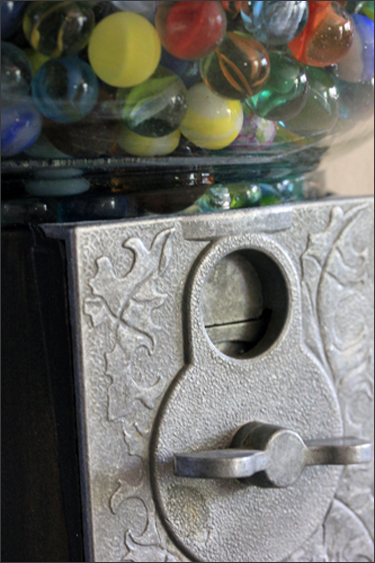 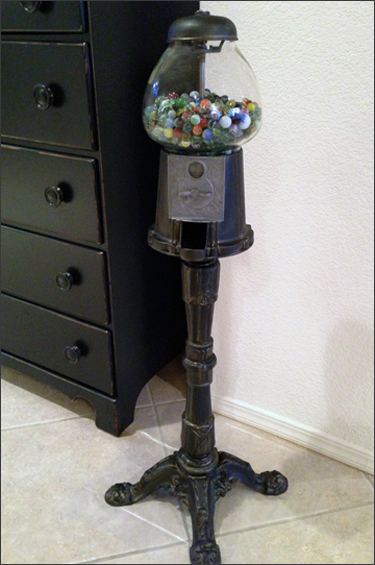 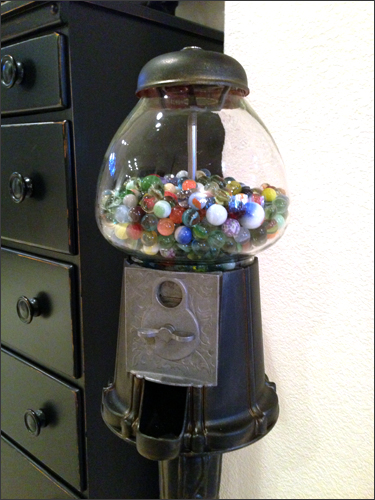 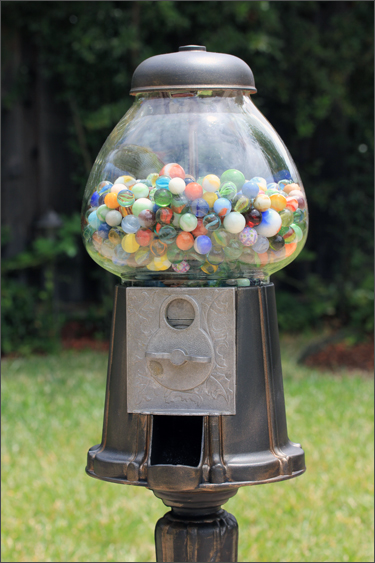 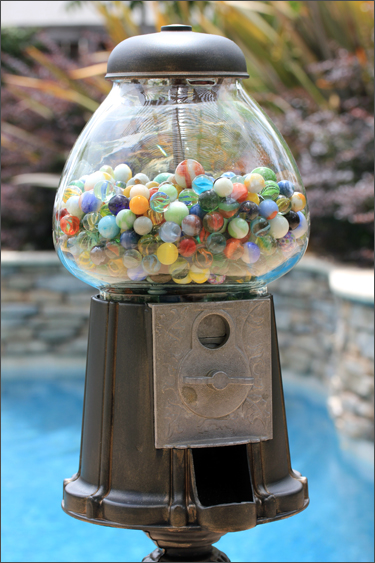 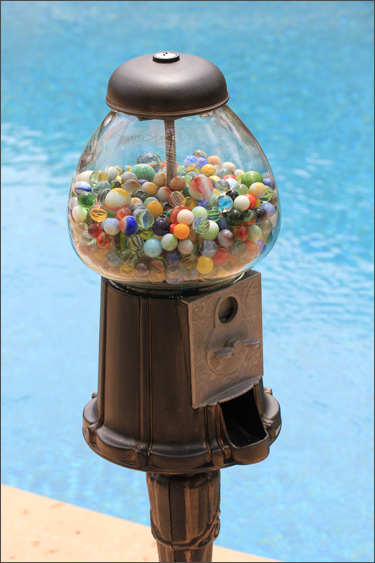 My customized gumball machine and special marble collection are displayed proudly in my entryway – not in my backyard by the pool, ha! ha!. Like in the apartment, I smile every time I walk through the front door. Total cost if you include the original price Carolyn paid – under $45 dollars. I had intended to pay her for the machine, but she generously gifted it to me for my birthday. Another reason to smile as I walk by.

I know this isn’t a food post or a recipe, but I do miss being able to write about life and things that are special to me. I guess technically… gumballs are food, but yes, marbles are stretching it. 🙂

I hope you guys don’t mind a few posts here and there talking about life, crafting, home decor and various DIY projects because I enjoy writing them and don’t feel like creating two blogs. I have problems finding the time for one blog, so Foodiddy it is.

Permanent link to this article: http://foodiddy.com/?p=8841