I hosted a small girl’s get together and decided that the menu would include naan pizzas with different toppings. My favorite of the night turned out to be the Thai Chicken naan pizza with peanut sauce, red peppers, carrots, cheese and cilantro… the sauce was absolutely incredible! 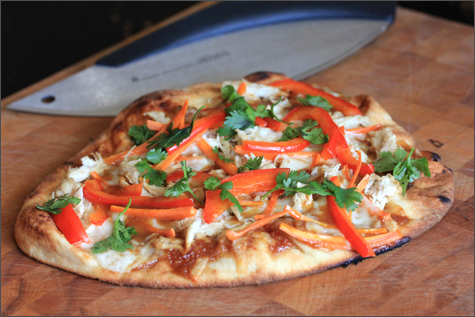 I had searched online for recipes and came across several different Thai chicken pizza options. I really liked one from Cookin’ Canuck. The peanut sauce was one she adapted from a Cooking Light Magazine recipe years ago. I made a few changes to the ingredients, cooked my chicken differently and used my Advantium oven to cook the pizza. 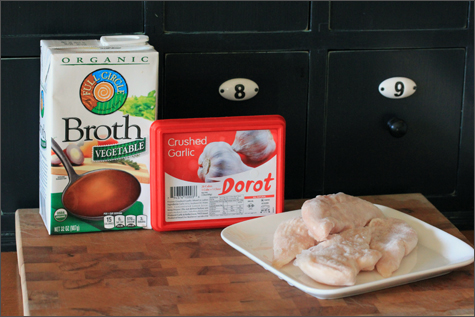 I used 4 chicken tenders, organic veggie broth (It’s what I had on hand) and 2 cubes of Dorat crushed garlic)  – I placed my chicken in a pot with the broth and garlic and then brought to a boil for about 10 minutes. I then let the chicken cool before shredding it. 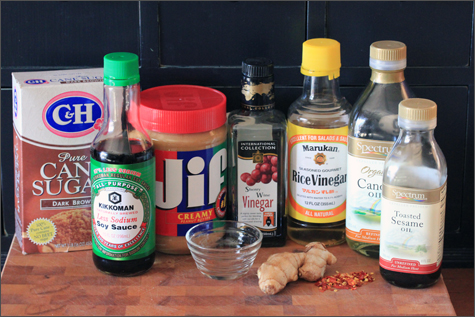 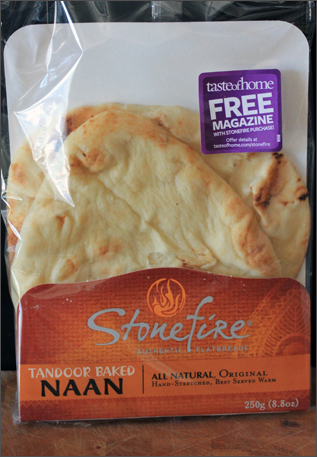 I used Stonefire Authentic Flatbreads – Tandoor Baked Naan (Original Flavor) – The extremely high heat during the cooking process produces big bubbles, an airy texture and the smoky flavor of an authentic Indian naan. Stonefire also has garlic, whole grain and sweet chili flavored naan. – My grocery store only carries the original and garlic, I’d like to find the others. I’m on the lookout for their pizza crusts as well. 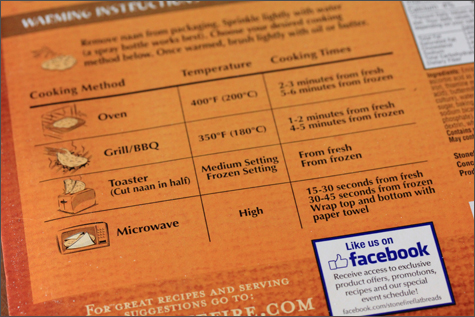 You can bake them in the oven, grill them on the BBQ, toast them in the toaster or microwave. 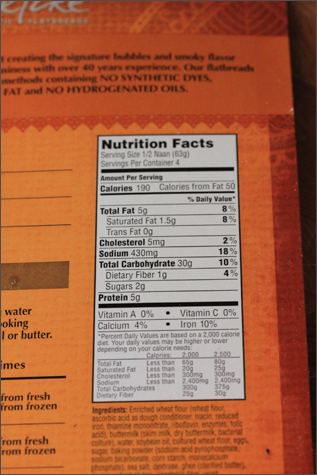 For those interested in the nutrition facts – 380 calories if you eat the whole piece of naan – which is very easy to do with this recipe. 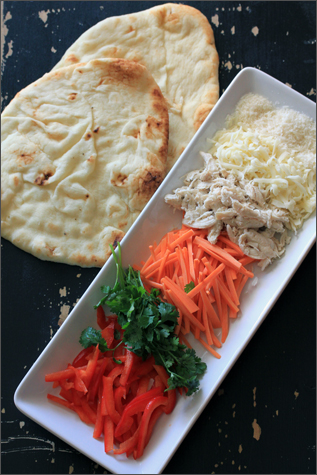 If you are vegetarian, you could easily omit the chicken and this pizza would still be amazing!

Baking Instructions:
I used my Advantium oven that has a built in “pizza” setting, but I realize not many people have that option. In a regular oven – preheat to 425 degrees F. If using a pizza stone, heat the stone in the preheated oven for about 10 minutes and then transfer the naan with toppings to the stone. Bake until the cheese is melted and the naan bread is golden brown, 7 to 8 minutes. 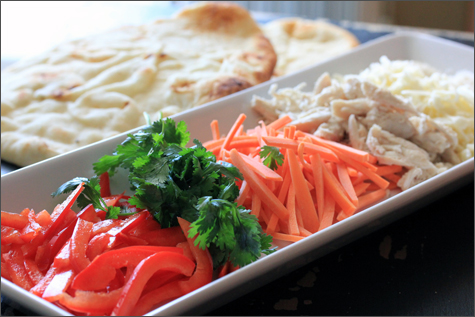 I placed all of my sauce ingredients into my blender. Toasted sesame oil, creamy peanut butter, light soy sauce, sherry wine vinegar, water, seasoned rice vinegar, canola oil, brown sugar, ginger and red pepper flakes. I blended until smooth.  It was my first time putting peanut butter in my blendtec and wow, that was a tad messy. 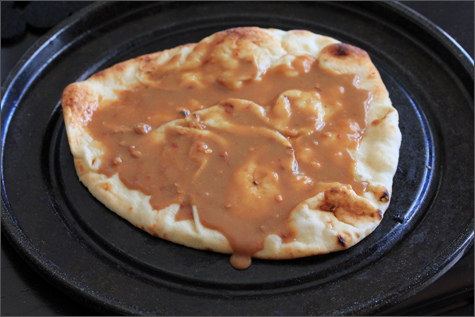 I put a generous amount of sauce on each naan (about 2-3 tablespoons). I honestly didn’t really measure any of the ingredients from here on out. I just divided it up and actually had quite a bit of peanut sauce left over, which I didn’t mind at all. I also had enough toppings to make two additional pizzas the next day. 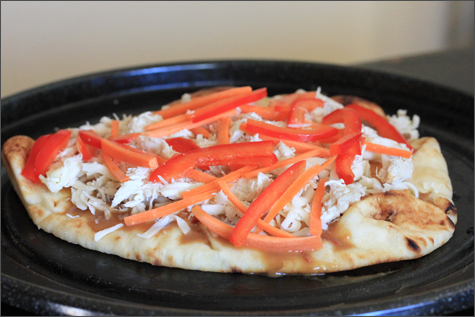 I added my chicken, cheeses, carrots and peppers to the already sauced naan. 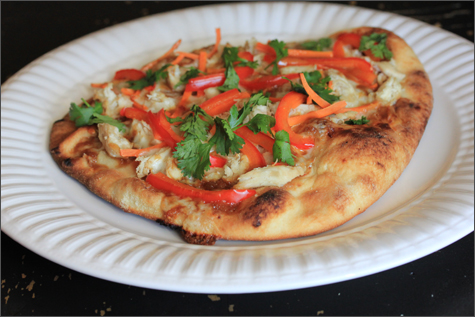 My oven cooked it to perfection… I added the minced up cilantro as a garnish and drizzled a bit more sauce on top of the entire pizza before cutting. 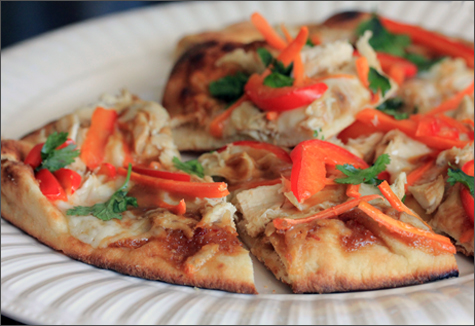 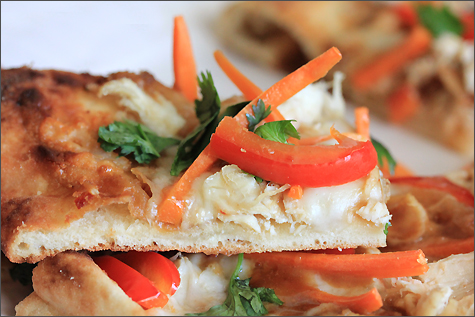 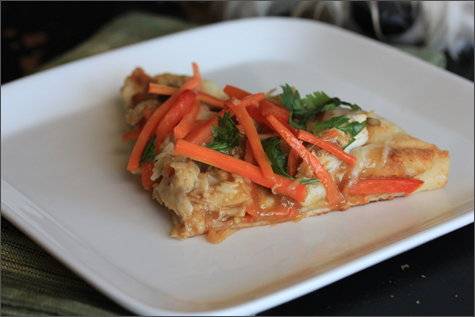 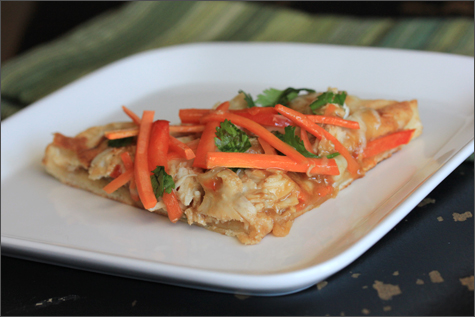 I’ve already made the pizza’s two more times since the get together and it must be noted that Dan was a huge fan! I think I will try the sauce on soba noodles with veggies next.

Other naan pizzas that night included whiskey caramelized onion, spinach and mozzarella with a red sauce and grape tomatoes, garlic, basil and olive oil (mashed together like bruschetta) with ricotta cheese and a little mozzarella. All three pizzas were a huge success.

Permanent link to this article: http://foodiddy.com/?p=8086