Old cookbooks and why I think they are cool…

I’ve only been to Apple Hill once and I blogged about it on October 17, 2010. Apparently I got really creative back then with the post title – “Apple Hill” – My first time to Apple Hill included visiting High Hill Ranch, Apple Ridge Farms and Boa Vista Orchards, which were all great.

Our friend Aaron lived in Camino for most of his childhood and over the years has talked about his favorite places within Apple Hill. We decided to take him up on his recent offer to visit some of those places and to have lunch with his parents who still live there. A tour of Apple Hill from a local… why yes, don’t mind if I do. I should clarify and say two locals, because Carolyn (Aaron’s other half) visited Apple Hill often and has family and friends that live in the area and work at some of the orchards. So two local tour guides… how cool is that?

Before we got to the Apple Hill goodness… we detoured to Placerville for their annual antique street faire. I was jumping up and down at the prospect of finding cool stuff – my recent injury prevented me from going to our usual Sacramento shows the past few months. 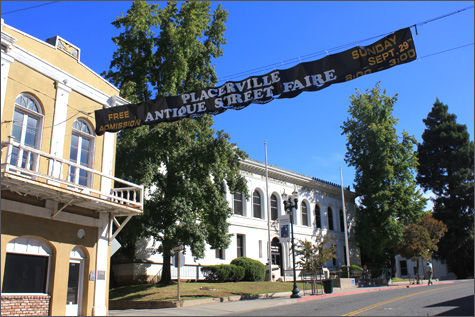 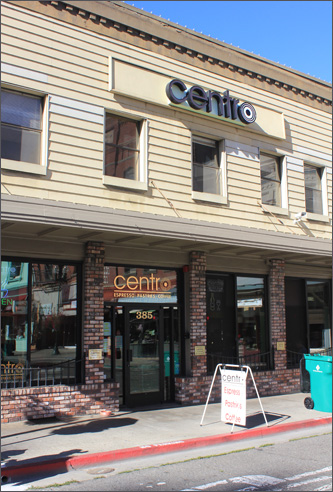 We started at centro so Carolyn could get some coffee… 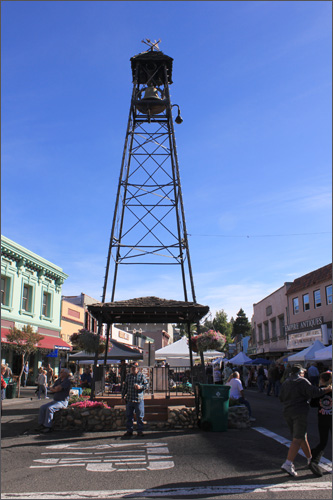 We then made our way to the first set of booths. I immediately found myself digging through a gigantic basket of vintage blocks… I scored the letter “K” (in orange) to add to my entry way shelves. $1.00 and I was off to the next set of booths. 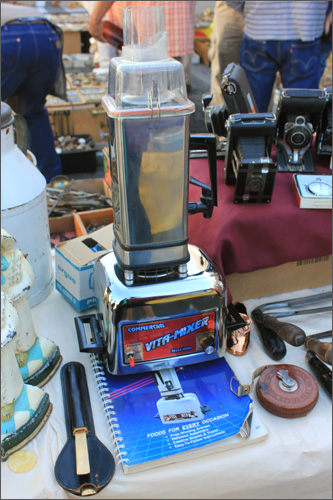 $175 for a Commercial Vita-Mixer Maxi 4000 w/plunger… always fascinated by vintage kitchen stuff and realized the design hasn’t changed all that much over the years. More plastic now, but still tall and slender. I prefer my stubby Blendtec. :).

Carolyn and I also continued with our tradition of finding and photographing the most bizarre item/display… I think placing jewelry on a stuffed lower body/butt… pretty much takes the prize. 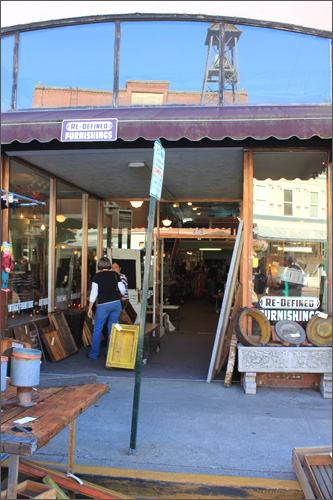 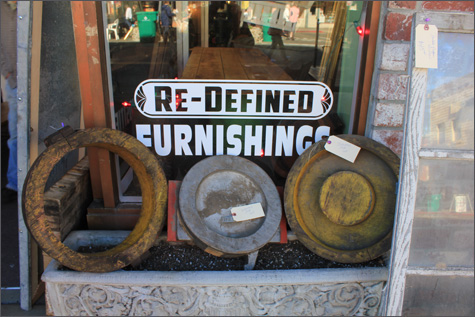 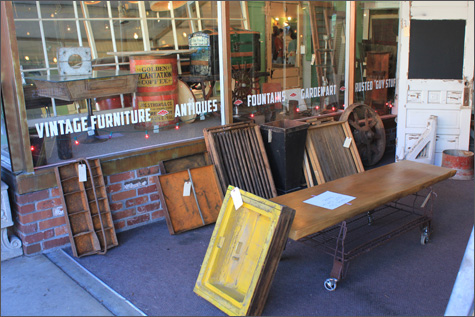 Love… Love…Love… I didn’t splurge at the store, but I did get some old, rusty springs to display pumpkins on for Fall decor. I also found some majorly discounted cocktail napkins ($1.00), place cards (.25 cents) and salad servers ($3.00) at the hardware store sale. All in all, a very successful side trip.

Now back to Apple Hill… 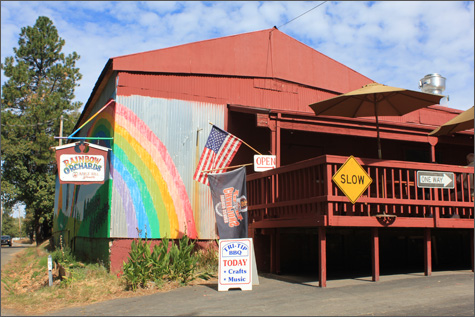 Our first stop was Rainbow Orchards for apple cider donuts… 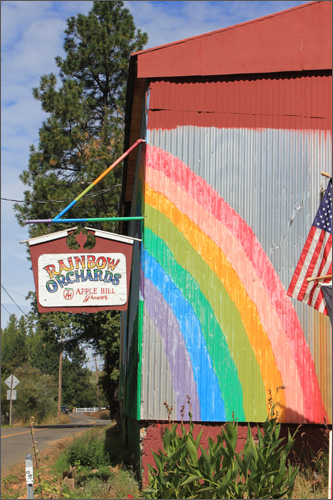 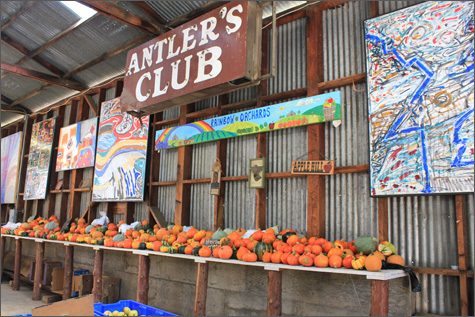 I enjoyed looking at all the artwork. 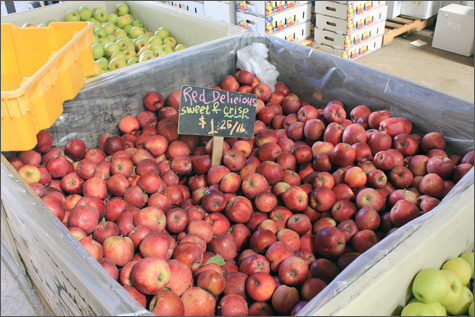 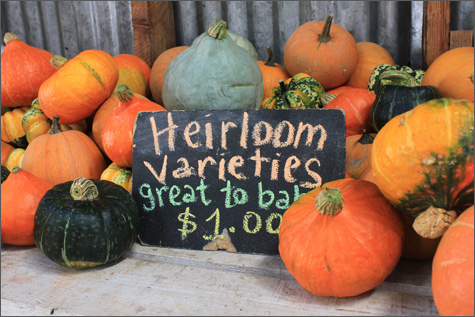 The colors and shapes of the heirloom varieties got me super excited to deck my house out for Halloween and Thanksgiving.

Aaron ordered the donuts and I got a hand-dipped corn dog for me and apple crisp for Dan. A pre-lunch to our lunch. Yep… a corn dog for breakfast, that’s how I roll. 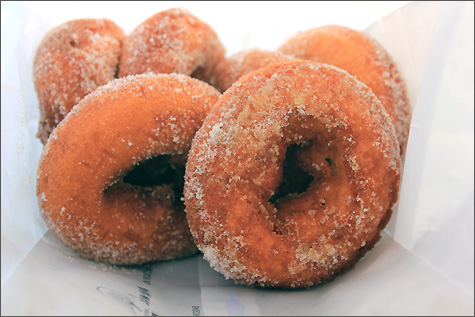 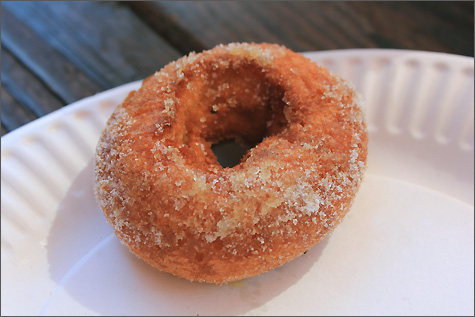 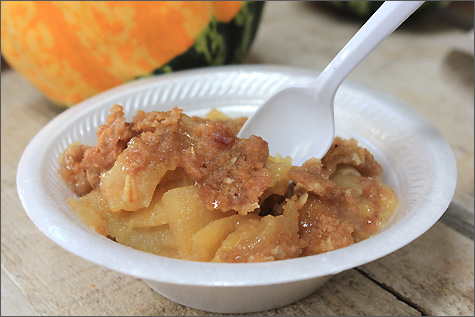 You could order the apple crisp with ice cream, but Dan opted without… I stole a bite and it was pretty incredible… warm, gooey and man did I wish he had opted for pie a la mode. 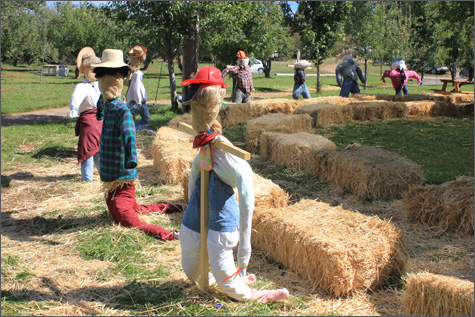 We ventured around back to see the craft vendors and happened upon this disturbing display. What happened to old fashioned scarecrows? A plastic fireman’s hat and stuffed body tied to a cross with a scarf? Really? No thanks… I’ll take “What is straw stuffed overalls, a plaid shirt, straw hat, button eyes and stitched smile for $100 Alex… then again, maybe I’m just not a fan of the scarecrow in general. Scarecrow from the Wizard of Oz – now he was super creepy.  Mr. rope around his neck/burlap bag face. Whoa… enough of that.

Onto happier things. After our first stop, we headed to Aaron’s childhood home for a wonderful grilled burger lunch. No crowds, a fun garden tour, great company and a beautiful view from the deck… good times indeed. Thanks to Aaron’s parents for the delicious food and visit. 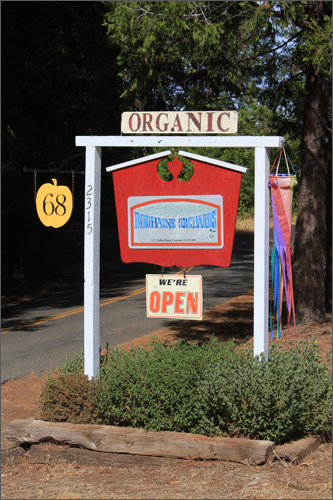 Next on our agenda was a stop at Bodhaine Orchards for pie. According to Aaron and Carolyn – the best pie in all of Apple Hill can be enjoyed there. 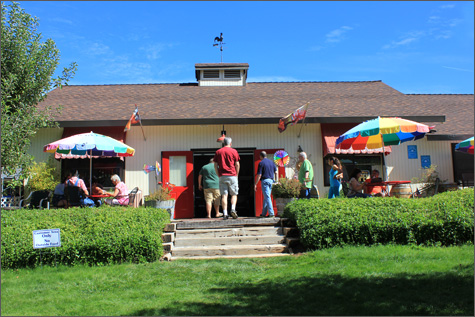 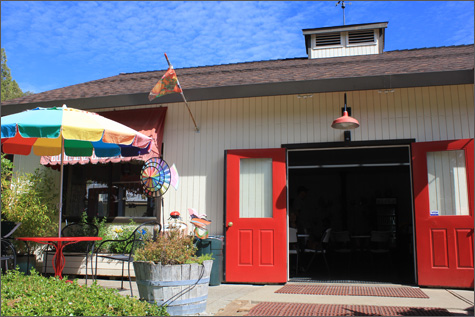 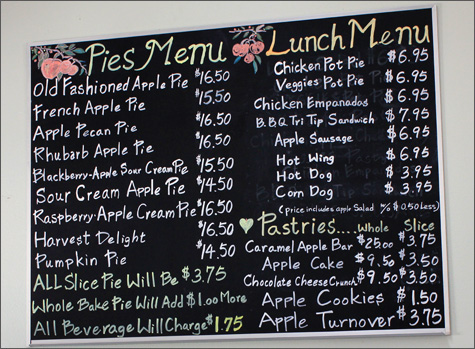 Aaron and Carolyn got the blackberry-apple sour cream pie to go and a caramel apple bar to sample while there. 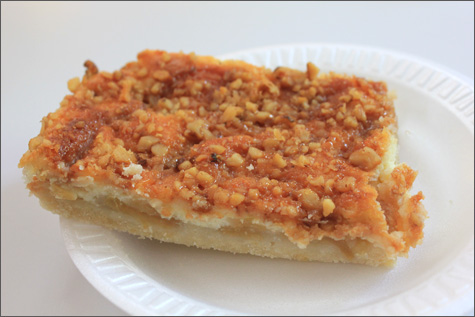 I was offered a taste of the caramel apple bar and it was delicious. 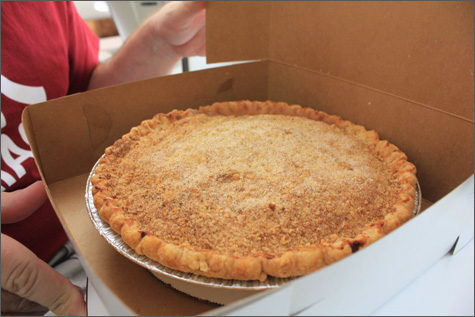 Dan and I purchased a French apple pie to take home. I noticed right away that the topping was less “crumbly” than we’ve had in the past… once home, I determined that heating it up was a necessity because the “pie dust/powder” seriously chokes you if you breathe in while chewing/inhaling the pie. Not quite sure why they don’t adopt my – “Our pies will kill you!” slogan… but I felt when eaten cold, it was indeed a choking hazard. Now once heated, my story and love for the pie changes… the pie dust/powder softens, caramelizes and coats the apples to perfection. I still prefer more of an oatmeal crumb topping, but this was a fun change. 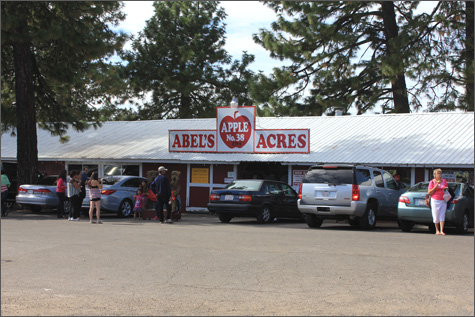 Our last stop of the afternoon was Abel’s Apple Acres. We had to park pretty far away on what I thought was cow patties… I was later informed by farm girl Carolyn that it was horse poop… awesome. What can I say? City girl doesn’t know her poops. Poop and food talk in the same post, what more could you want? 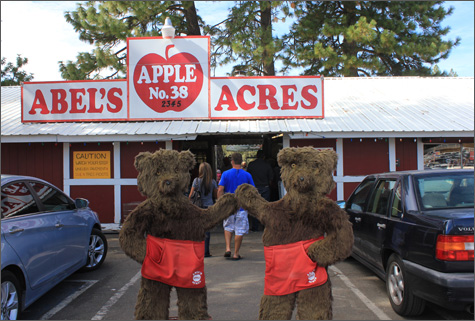 How about Annie and Andy –  flattened-wood, fur-coated, apron wearing bears? 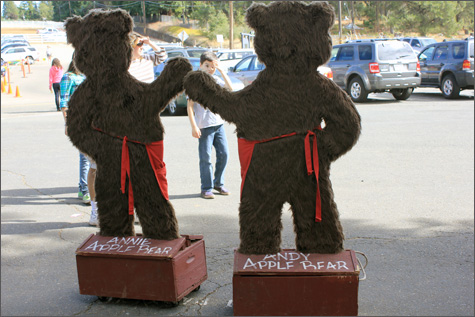 Or fur bear butts as you leave… a photo request from Carolyn. 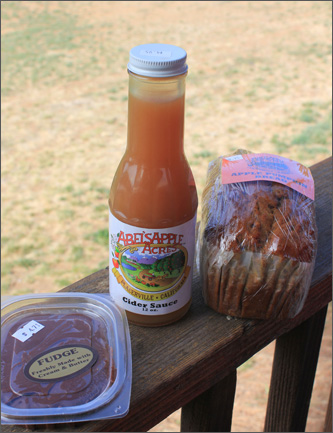 The reason for visiting Abel’s was for the cider sauce. You can put it over ice cream, pie or just about anything. I also picked up some fudge and a loaf of apple pumpkin bread.

We had a great day and I’ll be enjoying our haul for the rest of the week.  If you have been to Apple Hill, do you have any favorite spots I should visit? I think the Jack Russell Farm Brewery is next on my list – it was way too crowded the day we went.

Permanent link to this article: http://foodiddy.com/?p=9219