The tables were set and we were greeted as we walked through the Sacramento Natural Foods Co-op Community Learning Center doors.  Albert Katz introduced himself and then asked us to read an article he had included in our class packets. An Introduction to Olive Oil Tasting by Alexandra Kicenik Devarenne (Olive Oil Times Contributor | Reporting from Sonoma County, California). 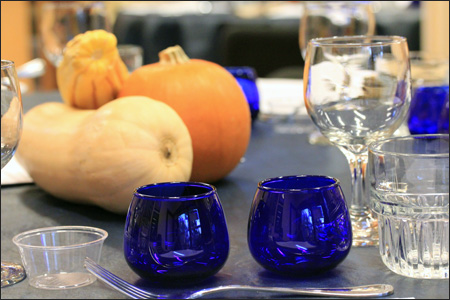 The article referenced “nifty little blue tasting glasses” and check – we had those on our tables. The cobalt blue color keeps tasters from being influenced by the color (never an indicator of quality – according to Albert) and the shape makes it easy to hold in your palm. More on the tasting later… 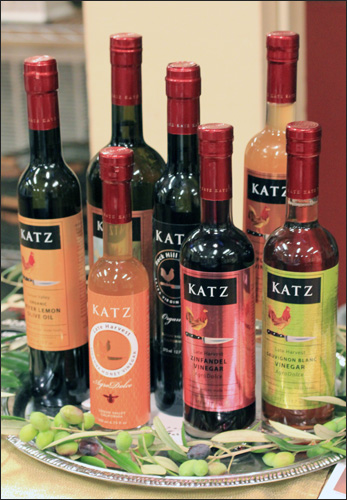 I already owned many of the showcased olive oils and vinegar selections on the above tray…  but the one in front caught my eye. 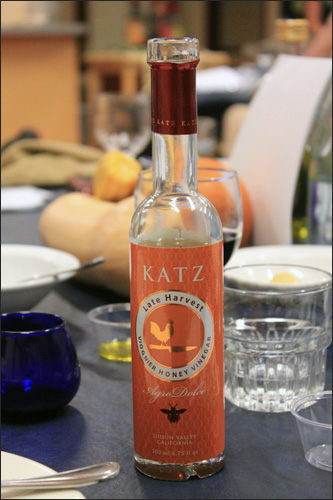 KATZ Late Harvest Viognier Honey Agrodolce Vinegar.  Agrodolce in Italian means ‘sweet and sour.’  It delivered in both areas. We got to sample some and 2 bottles ended up in my shopping cart after class. I’m excited to try some new recipes and will share the results here on the blog. 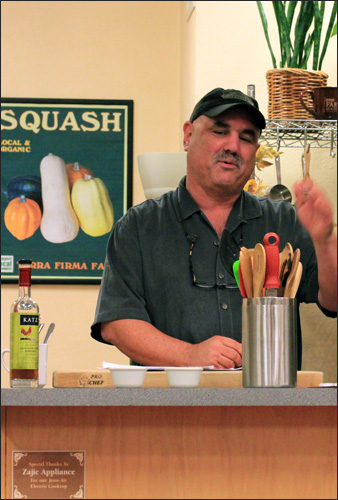 Albert Katz talked to us for a bit about his culinary adventures in Italy (where he saw olive oil being produced) and how it made him ask the question and wonder why good olive oil wasn’t being produced in California… He took his new enthusiasm back home to California where he became part of a small group that formed the California Olive Oil Council. The California Olive Oil Council (COOC) was founded in 1992. The COOC is a non-profit trade and marketing association whose purpose is to promote the growing of olives and the production of olive oil in California. The COOC supports certified olive oil standards and provides grower, producer and consumer education. The COOC represents over 90% of all olive oil production in California.

We learned a little bit about Rock Hill Ranch – Albert’s organically farmed ranch. The twenty acres sit on the southern tip of  California’s Suisun Valley. Albert explained how micro-climate effects the harvest and how having a cooler spring and summer really changes things – producing a softening influence on the fruit. KATZ Rock Hill Ranch Organic Extra Virgin Olive Oil won the most coveted award at the prestigious 2011 Yolo County Fair Olive Oil Competition – The Patty Bogle-Roncoroni Best of the Best – out of nearly 150 oils entered.

After some background and introductions, we got right into the food portion of the evening. Chef Dionisio Esperas (Dio) got started on cooking the menu for the evening. 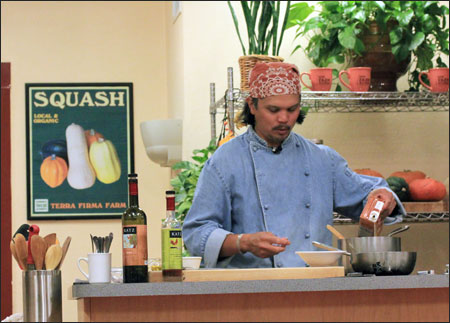 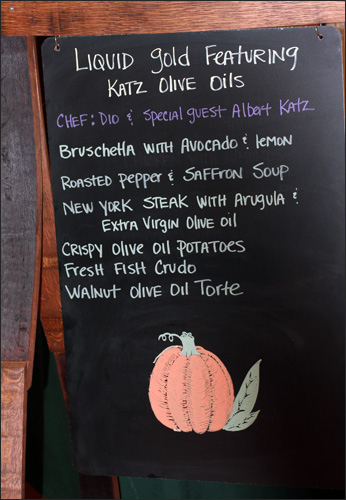 First up was Bruschetta with Avocado & Lemon 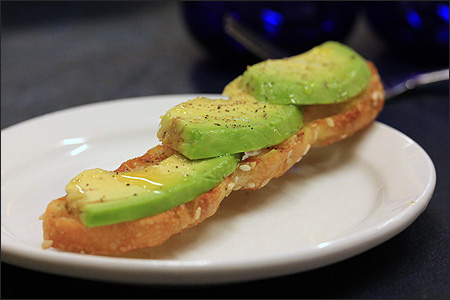 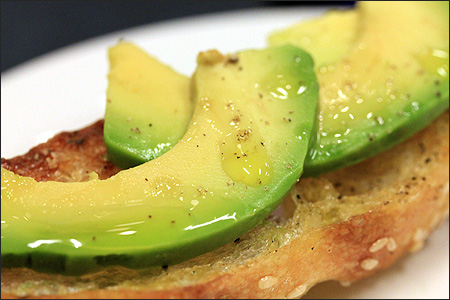 If you are ever in need of a good appetizer, this is it! – so much flavor and the perfect evening opener.

Albert talked a little bit about the Meyer lemon oil process – explaining that the olive oil and lemons go into the press at the same time and that  it took 3000 lbs. of Meyer lemons to make a couple hundred cases of the oil. 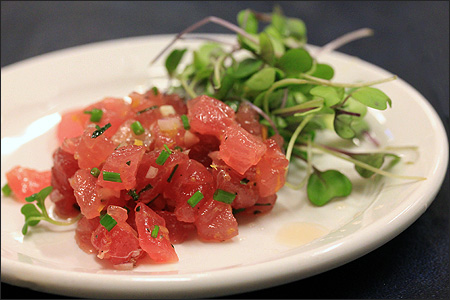 This tuna dish highlighted KATZ & Co. Late Harvest Sauvignon Blanc Vinegar and the KATZ Rock HIll Ranch Extra Virgin Olive Oil. I have never been more happy to have a slab of yellow fin in the freezer – fresh caught from my husband’s boss.

We then moved on to my favorite dish of the evening. 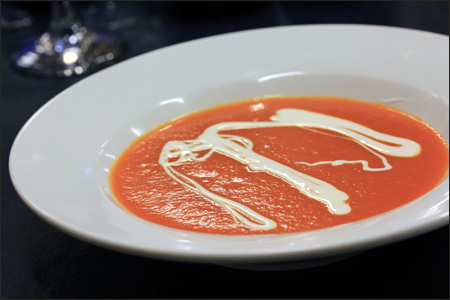 Roasted Pepper and Saffron Soup. Albert supplied the recipe – you can find it on the KATZ website here. 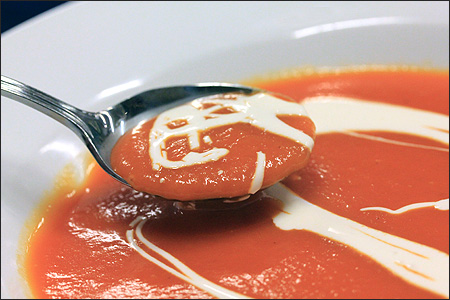 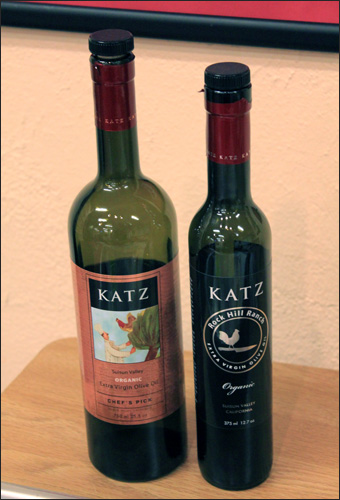 Next on the agenda – Olive Oil Tasting – Albert took over the class while Chef Dio put some New York Steaks on the outside grill. 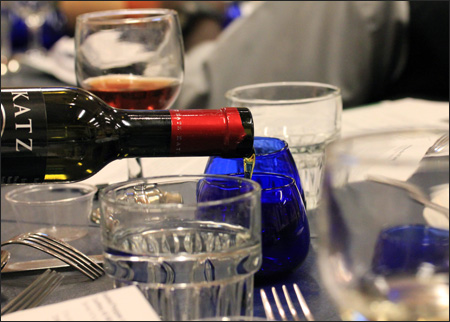 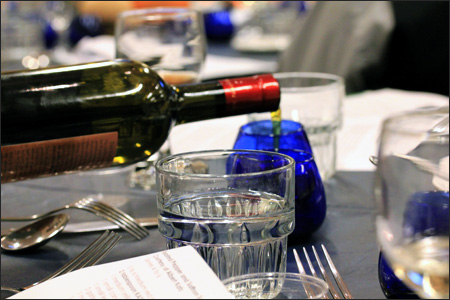 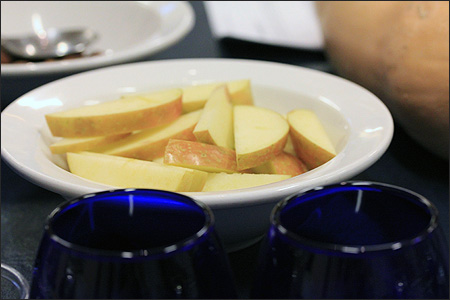 We were supplied with apple slices to cleanse our pallets in between tastes. 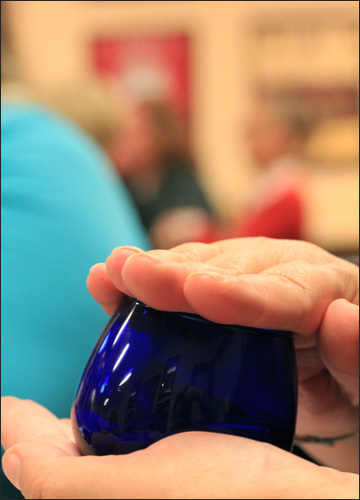 The aromas of the olive oil are a critical part of its flavor. We followed along with Albert’s instructions. Cup the glass in one hand and cover it with the other to trap the aromas inside while you warm it up.

Hold it… Swirl it….Warm it for a minute or two…

We then stuck our noses into the glasses and took a good whiff of the aroma. Some of the flavors people smelled at my table – cinnamon, fresh cut grass and spices. Now it was time to take a sip of the oil. I took a big swig and then sucked air through the oil as instructed – to coax more aromas out of it. I then closed my mouth and breathed through my nose – this is when I noticed the fruity aroma – then I swallowed and started coughing – 2 giant coughs before grabbing an apple slice. According to “An Introduction to Olive Oil Tasting – Pungency is a peppery sensation, detected in the throat, so swallowing some oil is important. Pungency is a positive characteristic of olive oil. It is a chemical irritation, like the hotness of chilies, and equally appealing once you get used to it. The second tasting resulted in a single cough.

We then talked about the 3rd cup – the mystery cup. 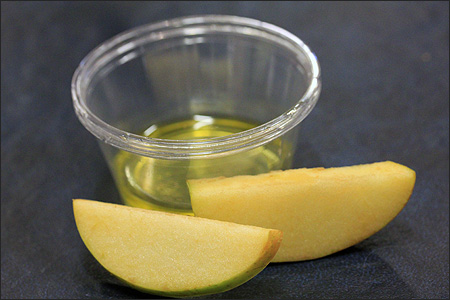 The mystery cup was a $15 selection pulled from a grocery store shelf in Napa. Turns out a lot of extra virgin olive oils in grocery stores aren’t as fresh as one might believe. We had the option of tasting what “bad” olive oil tasted like. Several people didn’t notice a difference in taste or smell. Everyone at my table thought it was disgusting – rancid/nut flavor… it was gross. I’m pretty positive that I have tasted rancid oil many times in my 41 years – especially now that I know what it’s supposed to taste like.

We talked a bit about the U.C. Davis Olive Center Publication – UC Davis Chemistry Analysis report of imported “extra virgin” olive oils and a copy was passed from table to table. We could see for ourselves how some of the more popular brands did in the study. 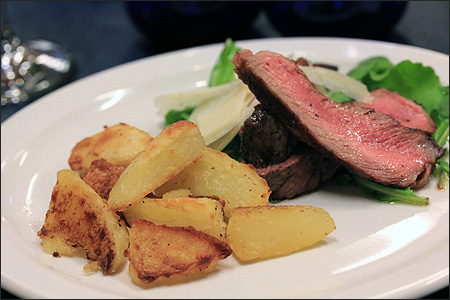 The potatoes were a simple recipe he shared from his mother in law – Russet potatoes, KATZ Chef’s Pick Olive Oil, sea salt and fresh ground pepper to taste with a Fleur de Sel finish. The potatoes were excellent – super crispy on the edges, and very soft on the insides. The steak was equally good. I loved that it was paired with the oil, parmigiano reggiano shavings and baby arugula. I’ve had blue cheese with my steak, but never parm – I liked it!

The last thing on the menu for the evening was Walnut Olive Oil Torte with Whipped Cream, another recipe from Chef Dio’s mother in law – Jane. 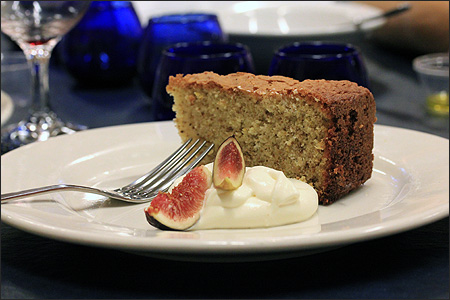 This was excellent! There was a rustic texture to the cake – perfect for fall and winter. 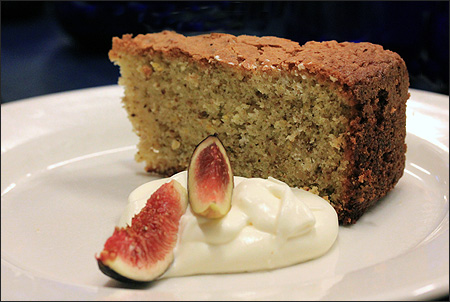 The whipped cream and figs were the perfect compliment to the cake. Pretty sure I will be making this again soon.

I had an amazing time at the class and I’m so thankful to the Co-op for inviting me and for continuing to showcase important topics and talents of local chefs.

My take-aways from the evening:

Permanent link to this article: http://foodiddy.com/?p=6298