My birthday week just flew by. I thought for sure I’d be posting this a day or two after the Exploratorium post… and here it is, almost a week later.

After spending time at the museum, we headed towards the Tee Off Bar & Grill at 3129 Clement St. The bar is located across the street from the Lincoln Park Golf Course near the California Palace of the Legion of Honor. The 19th hole style beer joint was featured last year on Diner’s Drive-ins and Dives. I happened to catch the episode and put it on my list of food joints to try in San Francisco – mostly because of my mac-n-cheese obsession. The show featured Chef Paul’s signature mac-n-cheese with pancetta. In my world, celebration or not, comfort food is always a good thing. 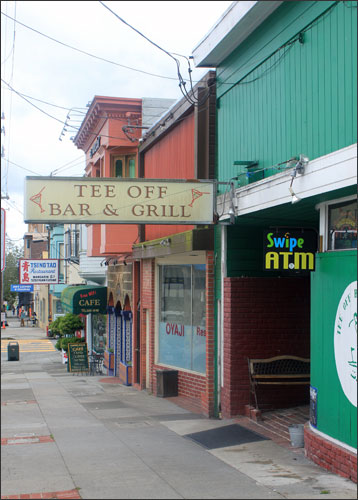 It was hard to tell if the place was even open. We pushed on the door and walked inside. 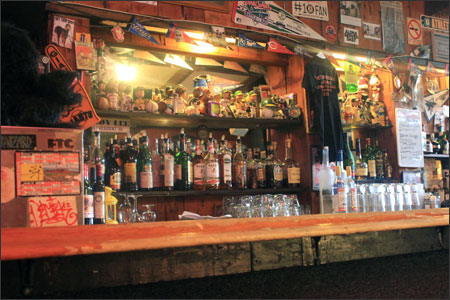 Yes, it was open. People were sitting at the bar and tables. They had a shuffle board table, pool table and maybe 10 dining tables crammed into a small, dimly lit space. There wasn’t a table big enough for us, but a party of two moved to a smaller table so we could sit down. Super nice and unexpected. 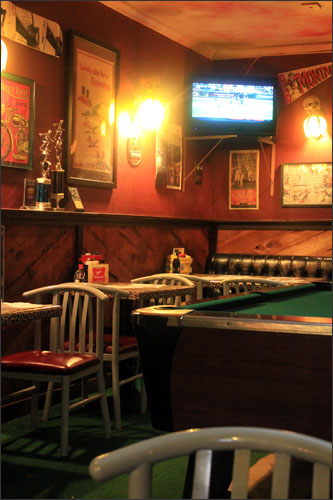 The food was not your average bar food – they referred to the place as a 5 star dive bar and the menu mirrored that. 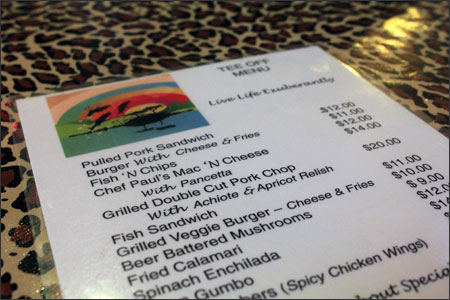 They had a board on the wall with specials and most of us ordered something from that, along with some regular menu items. The first dish brought to the table was the crab empanadas special. 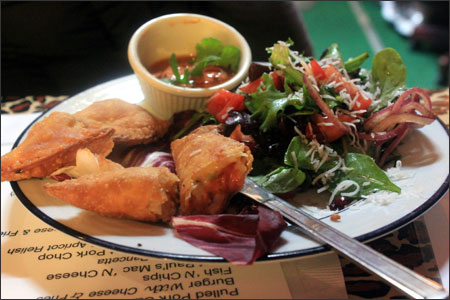 I dove in before taking a photo – whoops, bad food blogger. I shared my empenadas with the table – so I ended up eating 1/2 of one. Super lumpy crab meat and the dipping sauce had some zing. 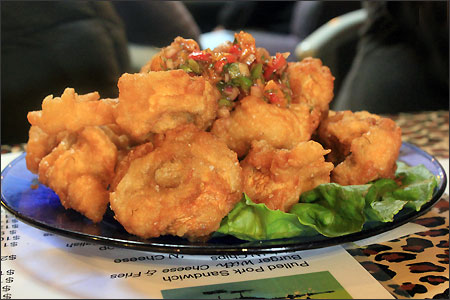 Aaron ordered the beer battered mushrooms and shared them with the table. They were delicious. I made sure to get some of the salsa topping and then I dipped them in ranch dressing – what? I didn’t say it was a healthy option… ha! 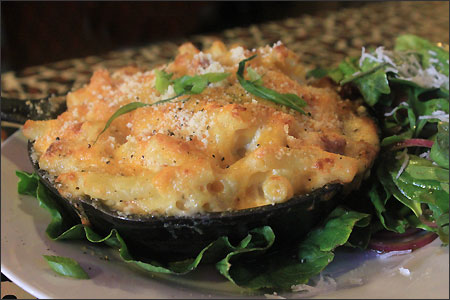 I also ordered the mac-n-cheese to share with the table. They cook it to order, so the waiter let us know that it would be a good 30 minutes before it came out. Not a problem, it was worth the wait. On the episode of Diner’s Drive-ins and Dives – Chef Paul cooked the pancetta until crispy and then added heavy cream right into the pancetta and fat. Can I get a double side of fat with that fat? Chef Paul used massive amounts of shredded cheddar, fontina, parm and provolone cheese. He then stirred in the cooked ziti noodles. He grated fresh asiago cheese and parm cheese on top before placing the cast iron skillet into the oven for 8-10 minutes. The mac-n-cheese was topped with more shredded parm and asiago, chopped fresh chives and cracked pepper. I was in cheese heaven. The crispy edges were the best part! We gobbled it up. 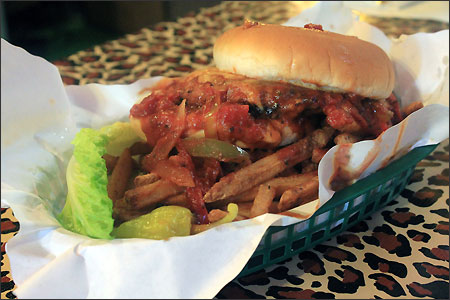 Dan and Josh ordered the Bada Bing special – a spicy sausage patty with peppers and fries. They both liked it, but man was that thing messy. It was definitely a knife and fork kind of meal. 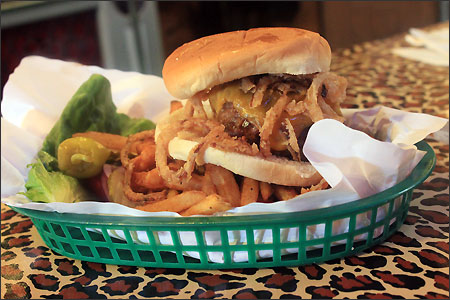 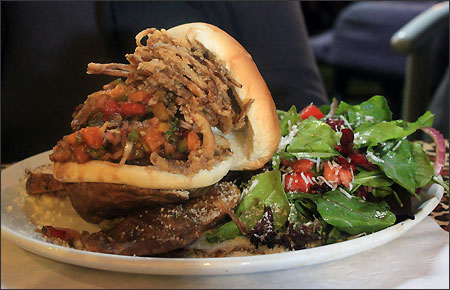 Deede went for it and ordered the $18.00 Kangaroo burger special. She ended up being pretty disappointed. The burger had a kiwi relish, unlike the traditional Aussie way with sliced beets and a fried egg. Deede wasn’t a fan, it was super lean and dense. She stuck to her potatoes, salad and my mac-n-cheese. Bummer, but she got an A for stepping out of her comfort zone.

I’m really glad we checked the place out. It was the perfect kind of food for a rainy day in the city. Definitely an adventure which is what this blog and trying new foods is all about.

It was time to say goodbye. We left Deede in the city so she could pick up her race volunteer packet and spend the night. She was a volunteer for the Escape From Alcatraz Triathlon happening the next morning. She had the official title of “wet suit stripper” for the morning portion of her volunteer gig.

The boys and I made one more stop before heading back to Sacramento. 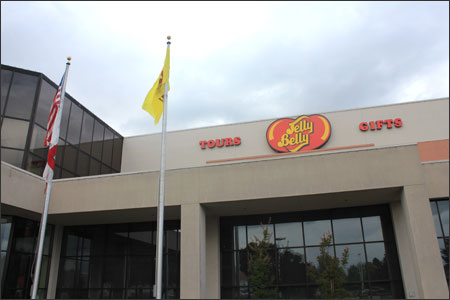 The Jelly Belly Factory in Fairfield. 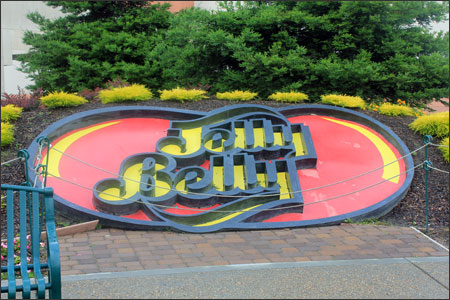 We didn’t have enough time to catch the tour, but we did have time to shop. 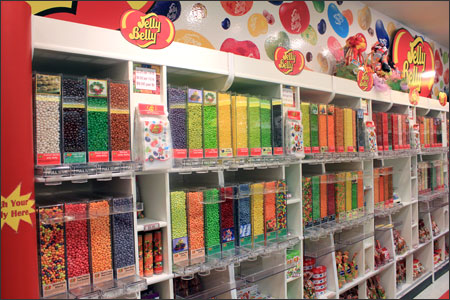 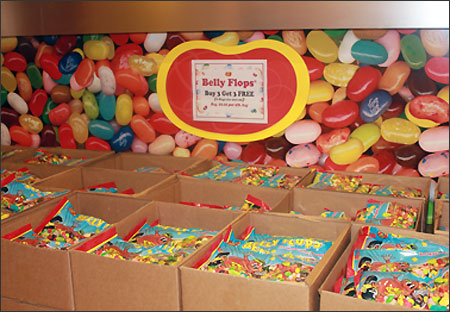 The boys opted for 6 bags of Belly Flops – all of the rejects – missing logos, conjoined twins and other bizarre shapes… We each got two bags. The one good thing about the flops, you eat them very slowly. A handful doesn’t always equal a pleasant flavor experience.

It was a great ending to a fabulous day. Definitely better than my 40th for sure.

Permanent link to this article: http://foodiddy.com/?p=5026