To have and to hold, from this day forward…

When I saw that Chef Michael Tuohy of Grange Restaurant was teaching another seasonal class at the Sacramento Co-op Learning Center, I jumped at the chance to sign-up for a second class with him. If you missed my re-cap of the autumn class, you can link to it here.

I follow Grange Restaurant and Chef Michael on Twitter and Facebook and I saw that Grange recently linked to a new recipe on the Joie de Vivre hotel blog for a Wild Salmon and Spring Vegetable Ragout. I hoped that he would be preparing the recipe in class. I was almost right. He created a vegetable ragout that used Alaskan halibut instead of wild salmon… and it was amazing! 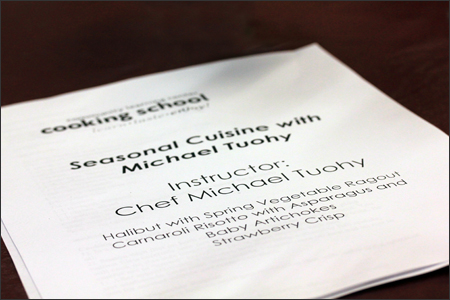 I sat down to the table and got out my camera. Chef Michael said, “uh oh, a serious camera”  😉  – I tried not to be too obnoxious.

We started with a fun sampler plate. 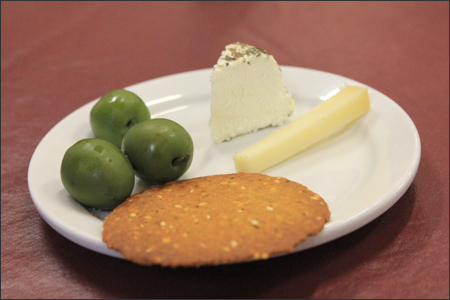 The small wedge of cheese was Herbs de Provence Chévre (goat cheese) from North Valley Farms in Cottonwood, CA. It was incredible. North Valley Farms cheese can be purchased from the food co-op and some local farmer’s markets. Grange Restaurant serves their chévre as well. We also had a slice of Point Reyes Toma that was wonderful – sweet and buttery. The plate also included a sweet potato cracker (missed the brand name) and castel vetrano olives. 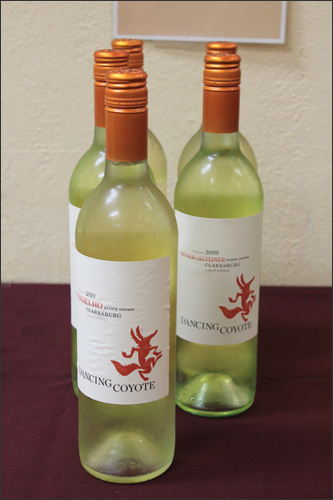 The wine selection for the evening was Dancing Coyote – a 2010 Verdelho and a 2009 Gruner Veltliner.

Even though we started off the evening with a recipe for strawberry crisp, I’m going to jump into the Carnaroli Risotto with Asparagus and Baby Artichokes first.

I’ve only made risotto once, so I learned a lot more by watching Chef Michael’s technique. Risotto was one of the first dishes he perfected at a young age. 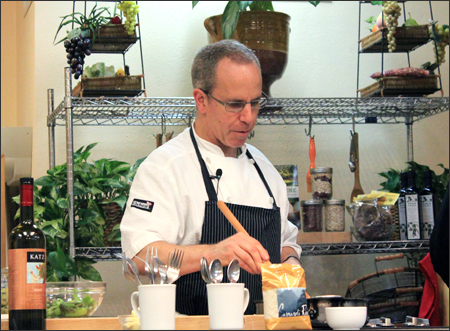 He claims it’s all about the spoon… ha! I learned the differences between Carnaroli, Arborio, and other rices. Carnaroli is a medium-grained rice native to the Novara and Vercelli regions of northern Italy. It was mentioned that we live in rice country and that Lundberg Family Farms was a local source out of Richvale, CA. 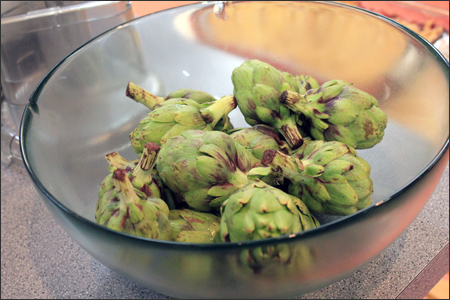 I learned how to properly clean and trim an artichoke using a Swiss peeler. I also learned that it is essential to use hot stock when cooking risotto and a huge part of cooking is actually listening to the food. The goal of making risotto is to “crack” the rice – we got to listen to it pop while it cooked. 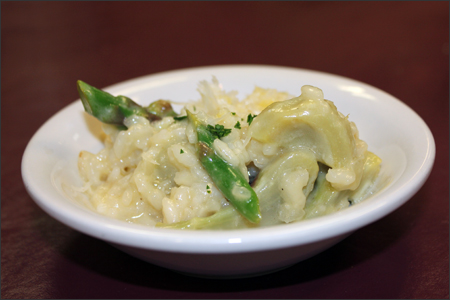 Chef Michael finished off our risotto with grated parmigiano-reggiano and Katz Extra Virgin Olive Oil. It was incredible. My entire table raved about it – one student said, “This is by far the best risotto I’ve ever had!”  – We all wished our bowls were bigger, it was true comfort food. 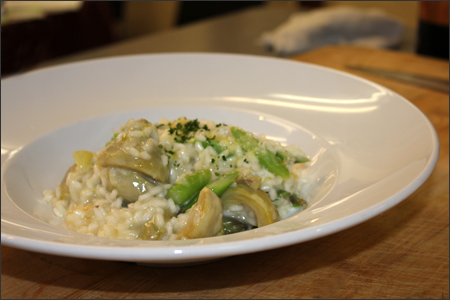 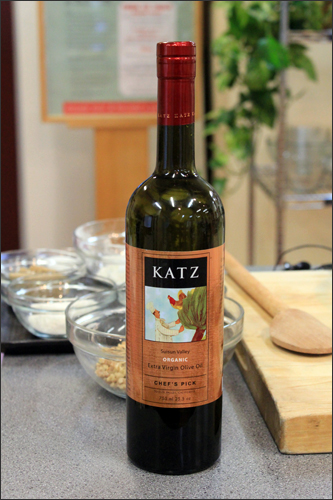 Katz Extra Virgin Olive Oil is one of Chef Michael’s favorites out of Suisun Valley. I was actually lucky enough to get a bottle of their 2010 Olio Nuovo from the co-op last year.

Chef Michael also talked about the UC Davis Olive Center and his role as a member of  the extra virgin olive oil taste panel – it was really interesting.

Next up was the Alaskan Halibut with Spring Vegetable Ragout 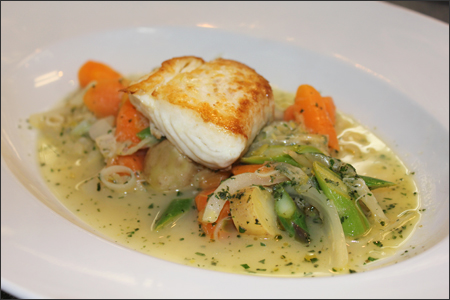 As I mentioned above, the recipe is very similar to the Columbian River Salmon with Spring Vegetable Ragout recipe highlighted on the Joie de Vivre hotel blog. The differences were the use of halibut instead of salmon, and the use of asparagus and fennel instead of fava beans and English peas.  Everything else was pretty much the same. 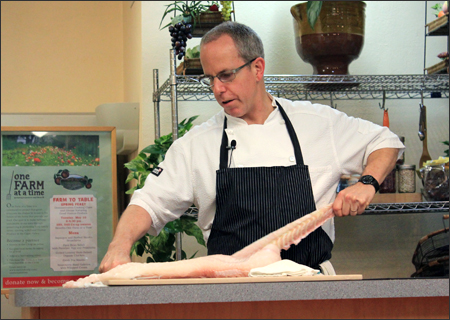 Chef Michael mentioned that there were only two kinds of fish and then asked students if anyone could name them. A gentlemen said, “flat and round” – and he was correct. Chef Michael talked about the different flat and round fishes and then spoke about Passmore Ranch in Sloughhouse, CA – where he gets his giant sturgeon, catfish and bass for the restaurant. He guestimated that the Alaskan halibut he block cut for us last night was originally about a 30-35 lb. fish. 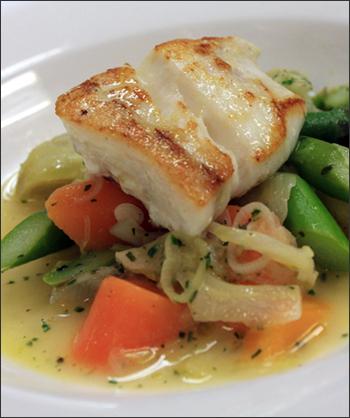 The halibut was so tender and the vegetables and broth were cooked to perfection. I learned some fish cooking techniques from him in the Autum class, but it was great to see Chef Michael in action again. A few take away tips – dry your fish fillet before putting it into the pan. Heat the pan until the olive oil starts to ripple, don’t be afraid to press the fish with a fish spatula, so it won’t curl up, and be patient/relax and let it cook before you start to move it around. 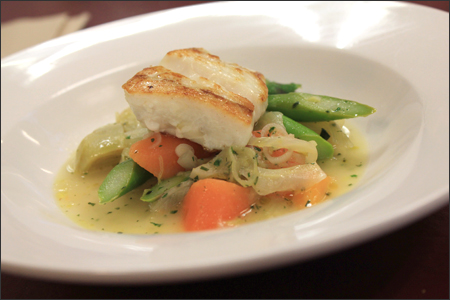 I’m excited to have a new fish recipe to try out on family and friends.

Back to dessert and the strawberry crisp. I can’t wait until the local strawberry stands start popping up… I will definitely be making the crisp soon.

I’ve made peach, apple and pear crisp, but never strawberry. It was a rather simple recipe and the perfect ending to a fabulous meal. I took a photo of one that had been prepared before class. Chef Michael admitted to not being a pastry chef – he doesn’t like to measure things – but he is learning to document ingredients and measurements because he has plans to come out with a cookbook. I’m really looking forward to that. 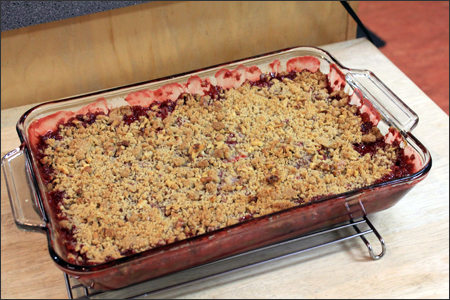 We were served small plates of the strawberry crisp with a side of organic vanilla ice cream. 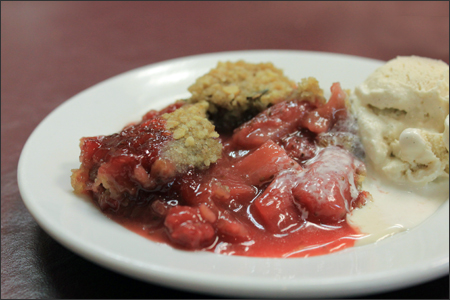 Once again I was so impressed by Chef Michael and the class. I love the Sacramento food co-op community and how passionate people are about buying local food. It was really cool that some co-op employees and another chef instructor signed up for the class. I can’t stop thinking about the risotto… can’t wait to create my own version with some of the seasonal add-in ideas.

Permanent link to this article: http://foodiddy.com/?p=4033