I attended an amazing class at the co-op Monday night. I had the class on my radar the minute the course list came out and I’m so glad I signed up. 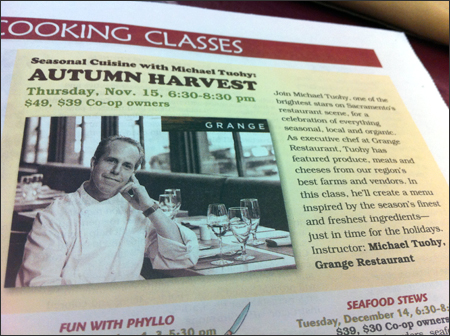 Autumn Harvest – Seasonal Cuisine with Chef Michael Tuohy of Grange Restaurant, located in the Citizen Hotel in Sacramento, CA. Chef Michael Tuohy is known for his farm to table inspired menus. Throughout the night he mentioned names of some local farms he uses for Grange. Del Rio Botanical, Riverdog Farm, Prather Ranch, Passmore Ranch and the list went on. He mentioned that we are so lucky to live near incredible farms and growers in the area. He talked about the importance of supporting local farms and it made me want to visit each and every farm.  He also talked a bit about the slow food movement and gave us a homework assignment to fill out the following postcard: 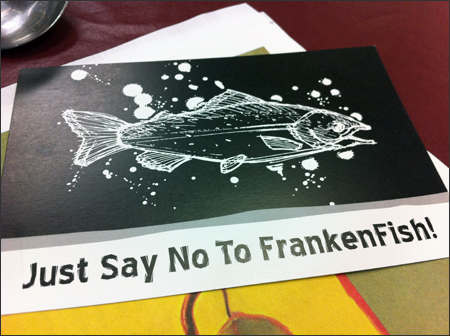 The vibe of the class was totally different than other co-op classes I’ve taken. Chef Michael definitely had a huge following. A few people at my table had participated in his farmer’s market summer tours. He takes groups of “foodies” to the farmer’s market (on Wednesdays) – decides right then and there (based on availability) what to buy and then everyone follows him back to Grange where he and his staff prepare lunch using the ingredients he just picked up at the market. I’m definitely going to check that out next summer. 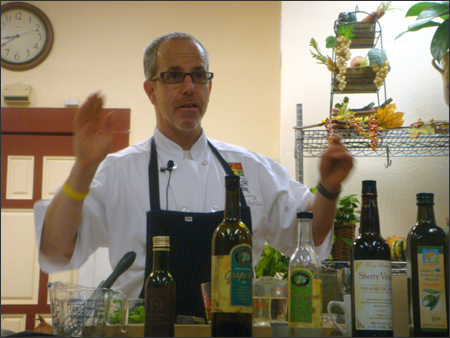 I was totally mesmerized  by Chef Michael’s enthusiasm and passion for what he does. He engaged the class in conversation and gave us a lot to think about. 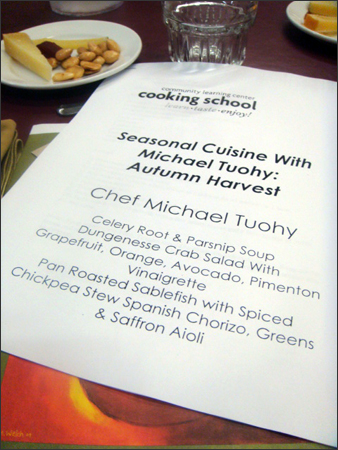 I was so excited to see what was in store for us for the evening. You all know I’m a huge celery root fan after having made the Williams-Sonoma Celery Root and Carrot Salad recipe. I was really looking forward to our first course – Celery Root and Parsnip Soup with Celery Leaves and Truffle Oil. I snuck over to the table before class and snapped a quick photo of the ingredients. 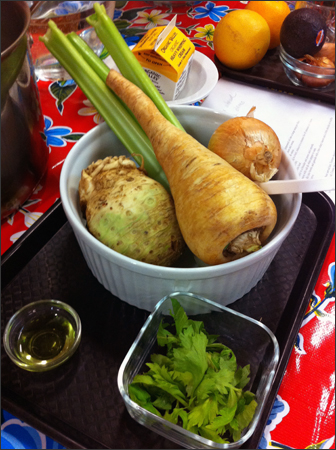 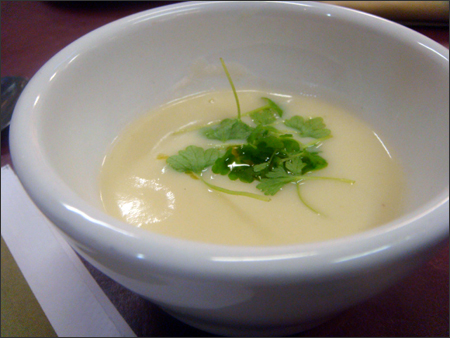 Chef Michael talked about this being “Cooking Season” – the summer is spent eating lightly, grilling, etc. and the fall/winter months are spent creating heartwarming dishes. I would consider the Celery Root and Parsnip Soup to be comfort food. He mentioned that the recipe was probably still floating around the MSNBC Today Show website, but I couldn’t find it. We were given the recipe last night, but I didn’t get permission to post it, so I will leave you with – it was freakin’ fabulous! He pureed the ingredients in the Vitamix and it was silky smooth, I loved it! 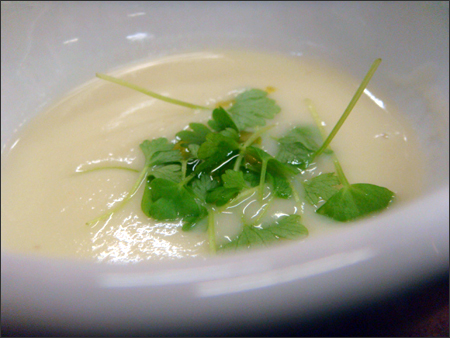 Chef Michael brought along some micro celery greens and it was my first time having those. They were so flavorful, he also mentioned that they are pretty hard to find.

Next up was the Dungenesse Crab Salad with Grapefruit, Orange, Avocado and Pimenton Vinaigrette. I had no idea what pimenton was. Now I know. 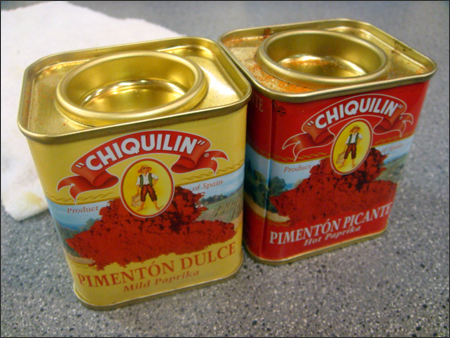 Pimenton is a Spanish paprika. The dulce has a sweet, smokier flavor, while the picante packs more heat. Chef Michael says that the two cans of pimenton are his favorite spices to use. 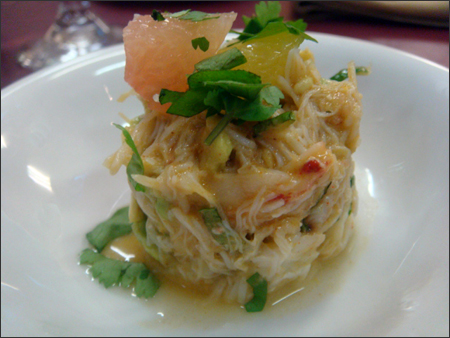 The fresh crab salad was layered with flavors. The vinaigrette took it over the top. I did manage to find the MSNBC recipe for this. The recipe they have online uses peekytoe crab – which are found on the east coast (Maine) – so just sub out the peekytoe for the dungenesse… which is availble on the right coast – ha! West coast…

Link to the crab salad recipe on MSNBC

The final dish of the evening was something I never would have ordered in a restaurant. I will now think twice before saying that. Pan Roasted Sablefish with Spiced Chickpea Stew, Spanish Chorizo, Greens (Kale) and Saffron Aioli. 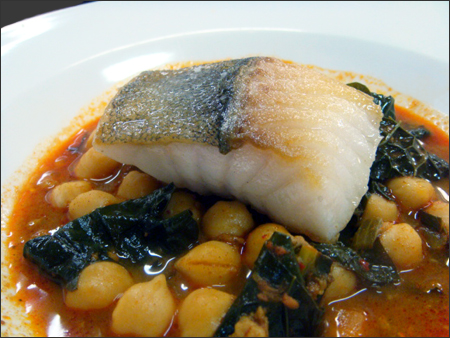 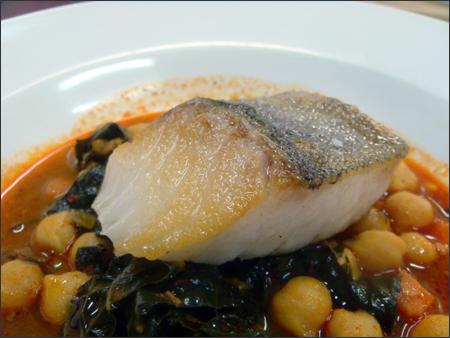 The fish was cooked to perfection. Sablefish is also known as Black Cod. It’s a succulent fish with a high oil content – uber heart healthy. I still have a fear of cooking fish, but I understand the basics and I think I could re-create this dish in my own kitchen. Chef Michael explained that you want to cook the fish skin side down – if you are wanting to serve it skin side up. Whatever side you want to present, goes down first – makes sense. He took extra time and went into the co-op kitchen to make sure our fish was cooked to his liking. The fish melted in my mouth. I even tasted the super crispy skin. The chorizo gave it some heat and I could have eaten the kale, chickpeas and broth all day. They accidentally left the saffron aioli off our dishes, but we did get to watch Chef Michael prepare some using a mortar and pestle.

We talked a little about finishing oils and we got the chance to reserve a bottle of Katz 2010 Olio Nuovo – looking forward to getting that in December. 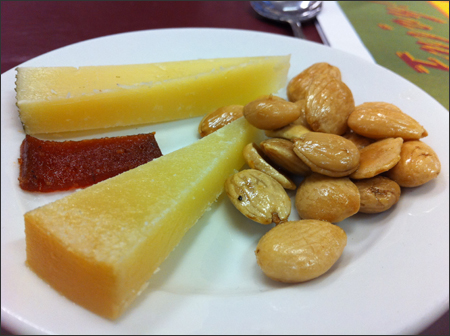 I had a fantastic time and connected with fellow foodies at my table. I am now armed with the names of some good Afghan, Indian, and Pho restaurants in the Sacramento area. I can’t wait to try some of them.

Each day I am thankful for this blog and everyone who reads, comments and supports me. While I got a lot out of my old blogging format/style, I am having a blast with the food stuff. I feel so much more fullfilled and connected to what I’m doing now. So thanks… thanks for making this a fun place for me to write.

Permanent link to this article: http://foodiddy.com/?p=2500