I’m halfway through my next round of classes at my local food co-op. I decided to take the Simple Country French Cooking Class with Chef Terese because I’ve been wanting to find a simplified Beef Bourguignon recipe and I also wanted to learn how to make mini Lemon Soufflés.

We started class with a small appetizer plate. 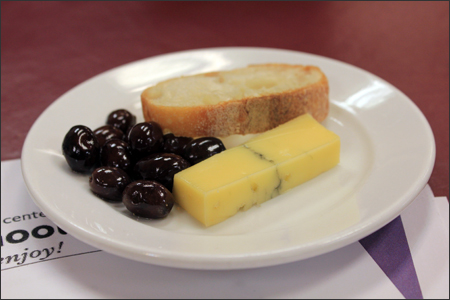 We had a French Morbier cheese – Morbier is a semi-soft cow’s milk cheese from France – named after the small village of Morbier in France-Comté. The cheese is recognizable by the thin layer of black ash (made from vegetable matter) that separates the morning milk from the evening milk. Times have changed and nowadays the cheese is usually made from a single milking with the ash added to honor past traditions.

We also had Niçoise Olives (Small brownish/purple olives that are grown in Southern France) and Acme Bread Co. baguette.

First up for the evening was Beef Bourguignon. 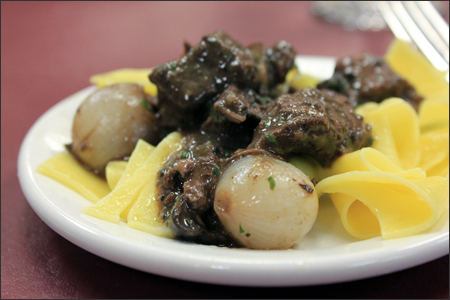 Directions:
Cut sirloin into 2-inch pieces that are a good 1/2 inch thick. Sprinkle with flour and mix well. Place into the bottom of a stewing pot or dutch oven. Brown the meat in a little oil (has a much nicer flavor than without) – the key to browning, don’t move the meat around – wait until a nice crust forms before flipping the meat pieces.

Pour in red wine and enough water to cover meat by 1 inch. Bring to a simmer and add in the salt, pepper, bay leaf, shallots, garlic and thyme. A student asked what Chef Terese would recommend as a wine substitute (crazy, I know 😉 ) and she suggested vegetable broth. Cover and simmer for 1.5 hours or until the meat is tender and the sauce has thickened. You can also bake this dish in the oven at 325 degrees for 2 hours or you could use your crock pot.

While the meat is cooking, saute the mushrooms in butter until fully cooked and nicely browned. Add in the pearl onions to warm. When the bourguignon is done, stir in your mushrooms and onions, add in the brandy and bring to a good boil.

If sauce is appears to be too thin, remove the meat with a slotted spoon and let boil until the sauce reduces.

Garnish with chopped parsley and serve with buttered egg noodles, crusty French bread or mashed potatoes. This dish can be made a day ahead and reheated. Serves 6-8 people.

I loved the simple approach to an otherwise complicated dish. The flavor was incredible and seriously, it’s not often that I have a spare 5-6 hours to bust out Julia Child’s masterpiece Beef Bourguignon recipe.

Next up was Bouillabaisse (Seafood Stew/Soup with Saffron) 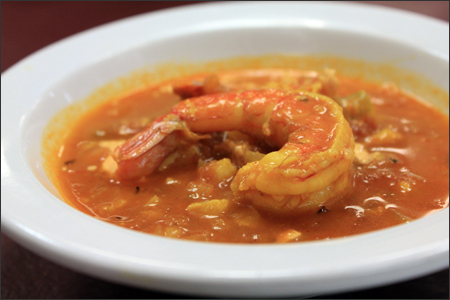 I’m not going to post the recipe because I wasn’t really fond of the dish – but I do have a childhood story to tell instead. My Mom loves Bouillabaisse and Cioppino. She used to order it at some of her favorite seafood restaurants. The big excitement for me as a little kid (doesn’t take much) – would be her bringing me home the clam and mussel shells from her soup. She would wrap them in a napkin and place them into her purse. The things Moms do for their children. We had a big shell display on a wooden chest in the family room and I would add them to the display as if I picked them off some exotic beach. Good memories for sure – Love ya Mom. 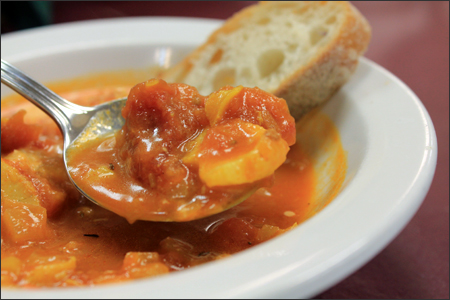 Chef Terese used sea scallops, shrimp and black cod in the bouillabaisse. I think the reason I didn’t like the dish was because she used Pernod. Pernod is actually a successor of absinthe, the potent liquor that contained a toxic oil from wormwood that was outlawed in 1915 in France. One of absinthe’s leading manufacturers, Henri Pernod, then focused its efforts on the lower-alcohol, wormwoodless, anise-flavored Pernod.

I am NOT a licorice fan and I think it killed the entire flavor profile for me. However, there were other students at my table that liked licorice and didn’t care for the flavor either. It needed salt or something.

I will save the Coq Au Vin and the Simple Lemon Soufflés (Soufflés Chauds au Citron) receipes for my next post.

Permanent link to this article: http://foodiddy.com/?p=3644