A few Sundays ago we met friends at the Sacramento Executive Airport, not because they were jet-setting in from some distance, more because Dan and I were early for our meet up time and he wanted to watch planes take off and land. Seems like ages ago when he was visiting the airport several times a week while getting his pilot’s license. It was a fairly slow morning, but we did get to see some planes take off and land.

Our friends showed up and we mapped out a plan to head over to Hong Kong Islander on Freeport Blvd. for dim sum. Aaron and Carolyn have been talking about the place for a long time and it was our first chance to tag along. I’ve only been to dim sum in Sacramento a few times and was excited to try a new place. 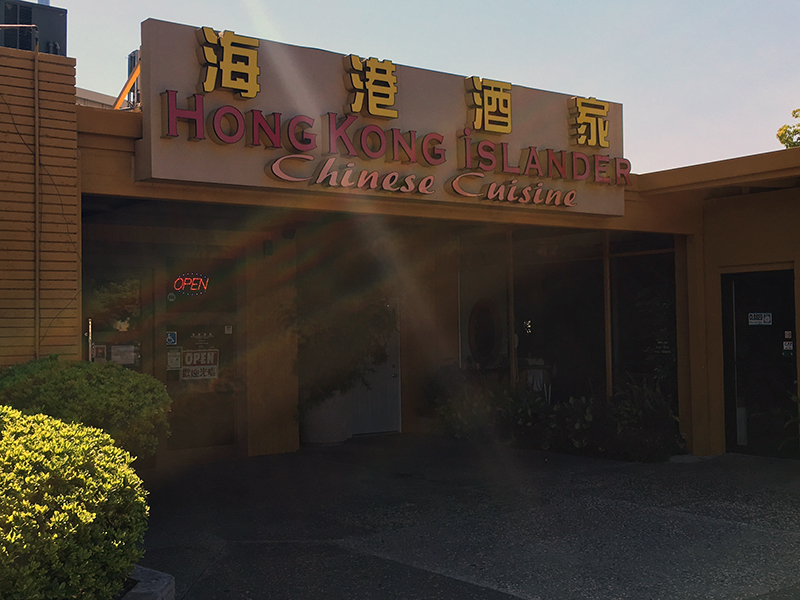 I wish I had noticed that the sun was shining right into my camera, but I was too busy walking to try to get in as soon as they opened the doors at 10:00 am. The line gets very long and that started happening about a 1/2 hour after we arrived. The line was out the door and wrapped down the side of the building as we were leaving to head home. 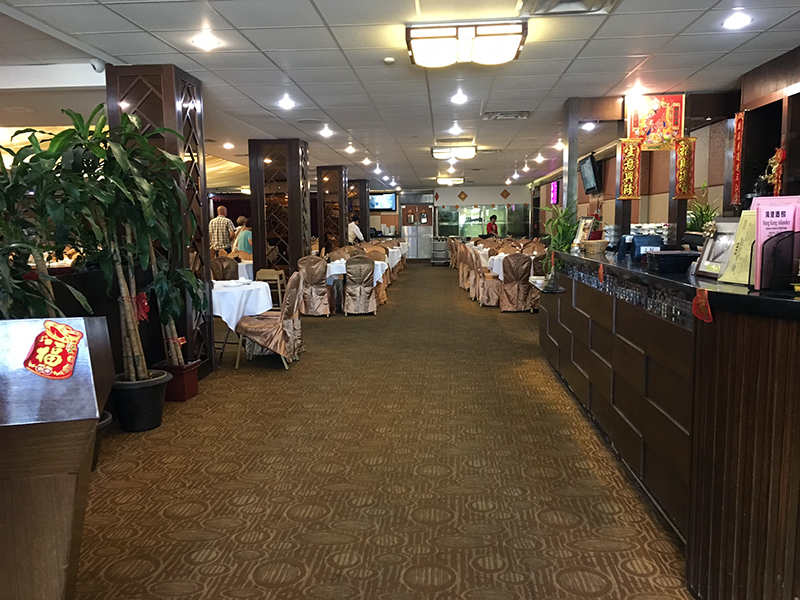 The restaurant was much larger than I had expected, but very similar to the other Chinese banquet style restaurants in Sacramento where I’ve attended many fundraiser/event dinners as a result of connections and friendships through my Secret War in Laos Oral Histories Project. 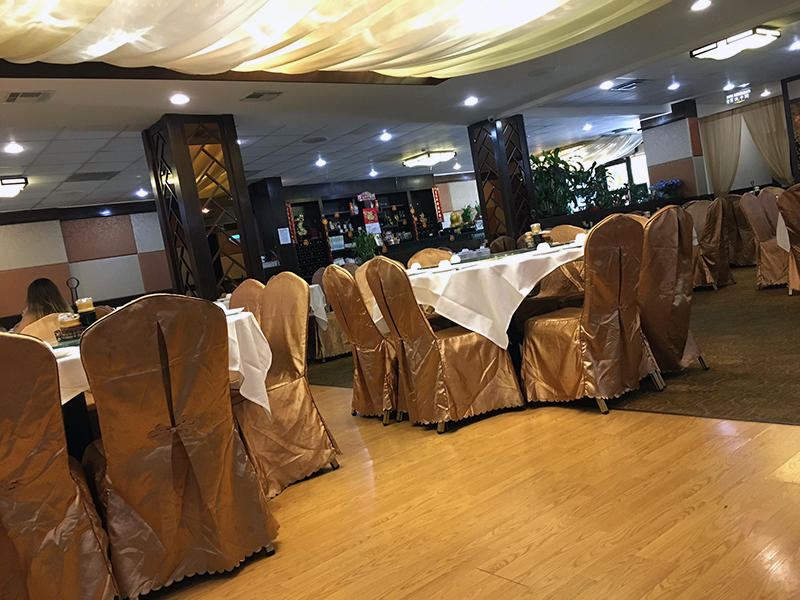 Big round tables with lots of gold accents throughout. We were one of the first groups to be seated. I could already spy the carts and servers starting to line up near the kitchen entrance. 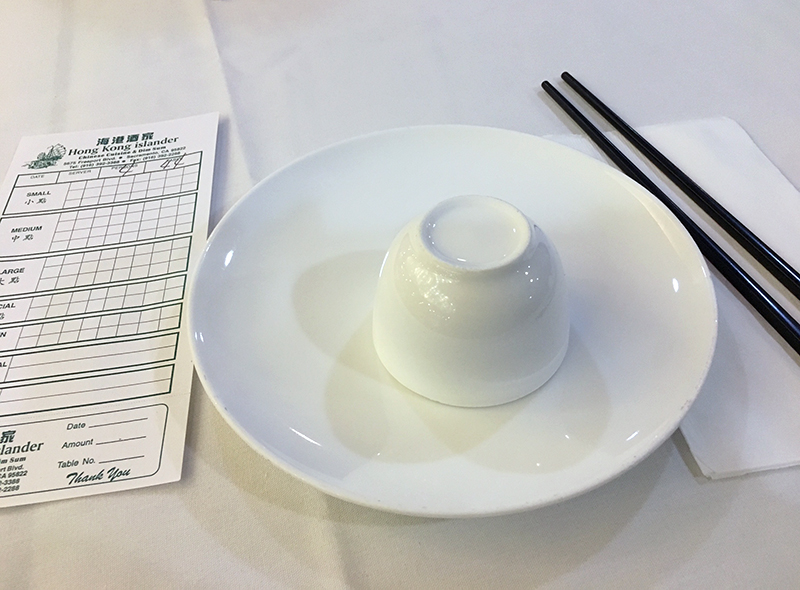 I stuck with tea and water and Dan was happy to get a Coke. We got our tally card (I’m sure there is an official name for it) but basically it’s to track how many small, medium, large, special or kitchen plates your table consumes. Small plates were $2.68 and generally had 2-3 items, medium plates were $3.68, large plates $4.58, special plates $5.28 and kitchen plates were $6.68. We had lots of hash marks on our card, mostly medium, large and special plates.I really don’t think much came on small plates, so expect to pay the slightly higher prices.

I browsed through the three columns on the menu and Dan and I basically left things up to Aaron and Carolyn when the carts came around. 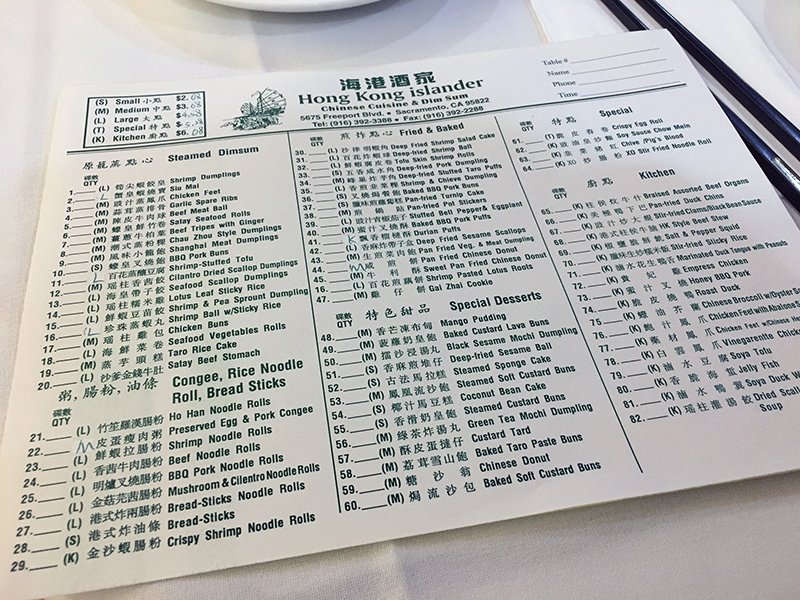 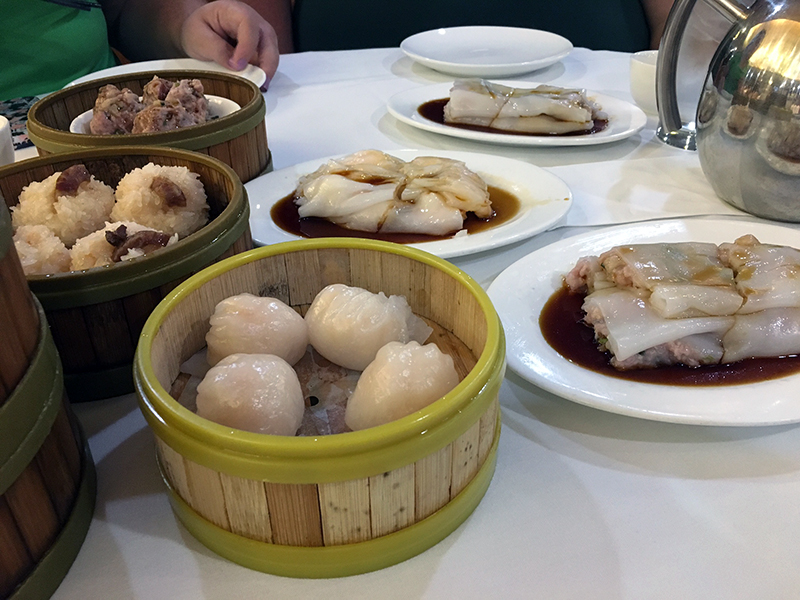 In the far back – Siu Mai (also spelled Shu Mai or shumai) – traditional pork Chinese dumplings, one of my favorite dishes of the day. Shrimp rice balls and shrimp dumplings also filled our table for rounds one and two. Aaron knew going in that I would probably like the Siu Mai… and he was right. 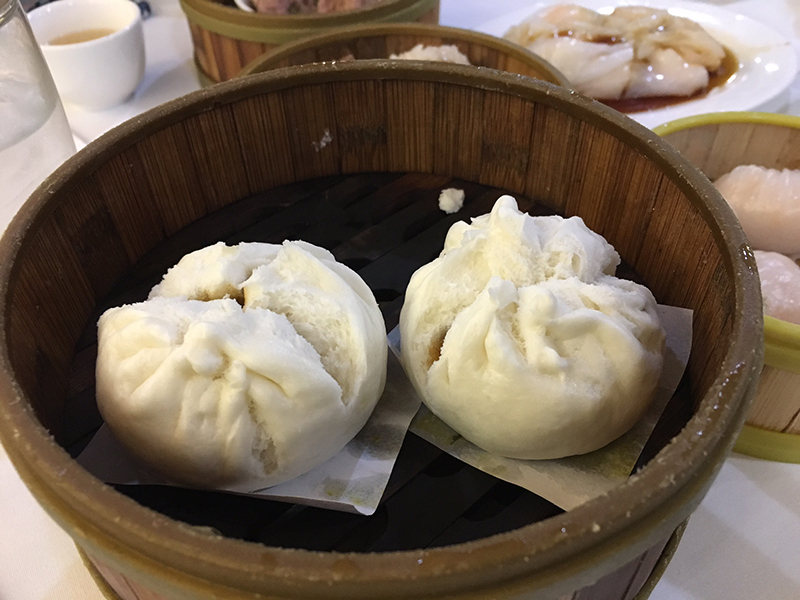 Dan was a huge fan of the BBQ pork buns. He ended up eating a steamer basket by himself. 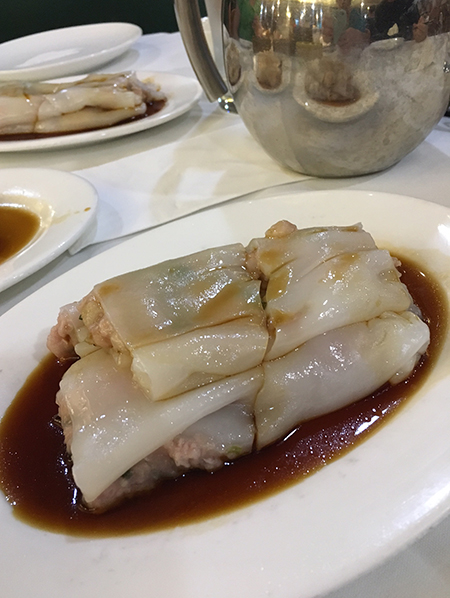 We got both beef and shrimp noodle rolls. Long rice noodle sheets wrapped around the beef or shrimp filling with onion… I liked both rolls, but preferred the texture of the shrimp roll because of the whole pieces of shrimp. The sauce was a sweet soy sauce, but I’ve also had noodle rolls served with oyster sauce – I like the soy better. These are often served for breakfast with hot tea. I thought they might be fun to make, but then I started watching YouTube videos and got a little scared of the process. Mostly because they were big scale restaurant size… I’d have to make a much smaller “at home” version. 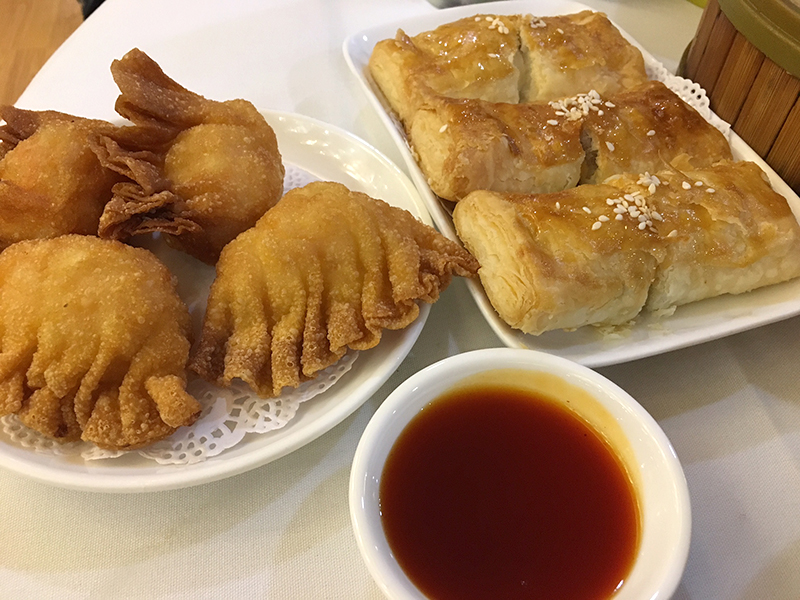 Deep fried wontons (the round pouch size were shrimp and the others were BBQ pork) and BBQ pork puffs. Lots of BBQ pork items and we were all o.k. with that. 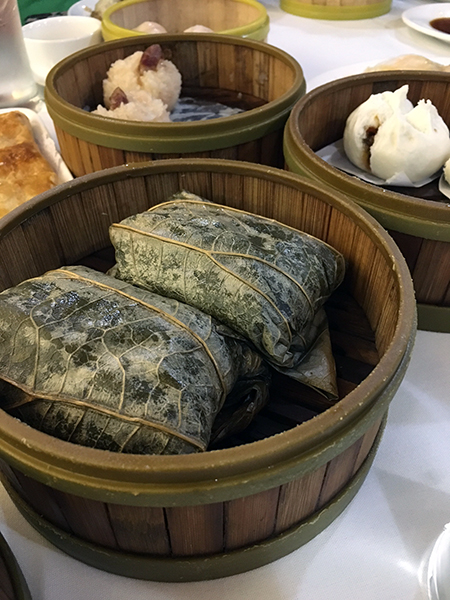 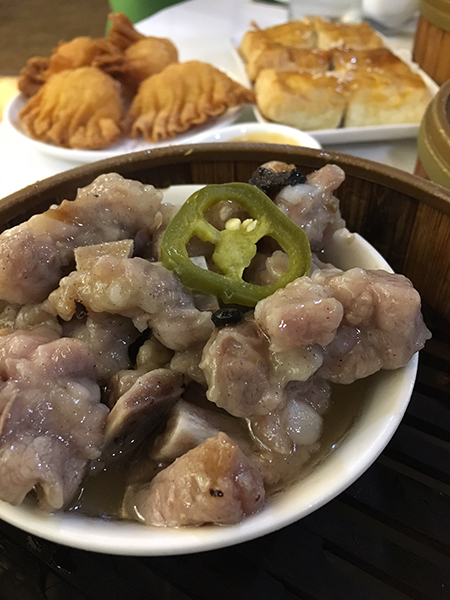 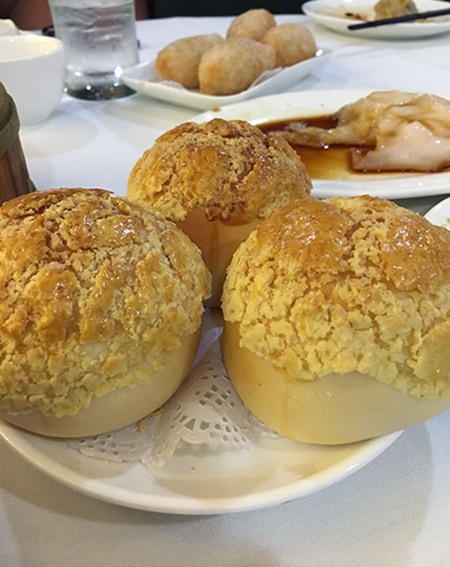 We ordered too much out of the gate and we all got full before the majority of the fried items and dessert carts rolled through. My strategy for next time will be to sample one thing from each plate, rather than going back for seconds and thirds on my favorites. I would have liked to have tried more items, including some of the desserts. I’ll save this strategy for next time with a bigger group.

Carolyn’s tip for everyone is to make sure to order from the carts that are full of similar items, not the ones that have a big variety… since those are the leftovers from the first cart runs and aren’t as hot.

I did feel like the carts kept coming, which is much different than previous experiences I’ve had at other dim sum restaurants. The servers were attentive and happy to fill up our table with plates and steamer baskets. I think location is key, where you sit has everything to do with how often the carts come around.

It was a fun way to spend a Sunday and I jokingly said as we left – now we won’t need to eat until tomorrow. Well… that became a true statement when I skipped dinner. Yes, I was THAT full.

Thanks Aaron and Carolyn for another adventure in the books – or in this case, on the blog.

If you haven’t checked this place out – you should.

Permanent link to this article: http://foodiddy.com/?p=11024