I feel very fortunate that I got to taste the delicious foods at the Sactoberfest preview event at Ten22, because Sunday’s Sactoberfest didn’t turn out as planned. The wind chose not to cooperate and combined with the dust made for unfavorable conditions for the food vendors. Unfortunately some had to pull out of the event because of it. We didn’t let that stop us from having a good time and the same goes for many others attending on Sunday. 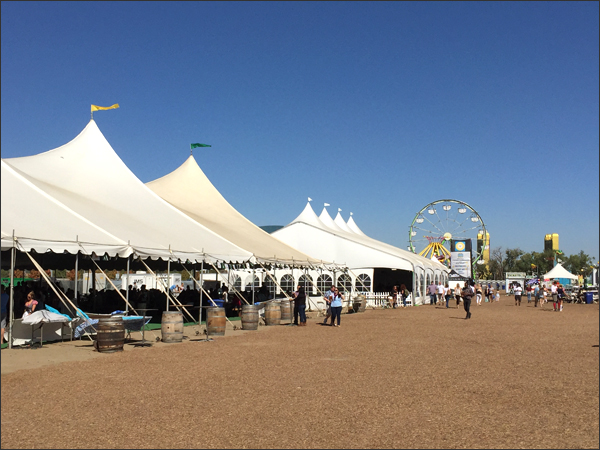 Bright white tent tops became beige in color due to the dust storms that kept blowing through. We headed directly to the beer tents to fill up our steins. 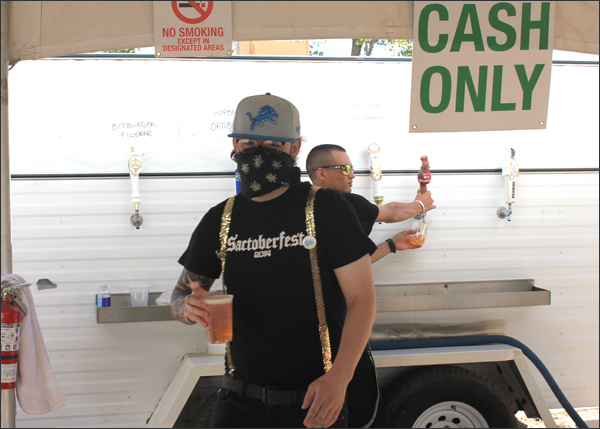 Thug life beer servers… ha-ha. They had to endure some rather miserable conditions and they made the best of it. All day long we encountered very friendly event staff. Their main concern was that everyone was having a good time. The beer and cider helped. 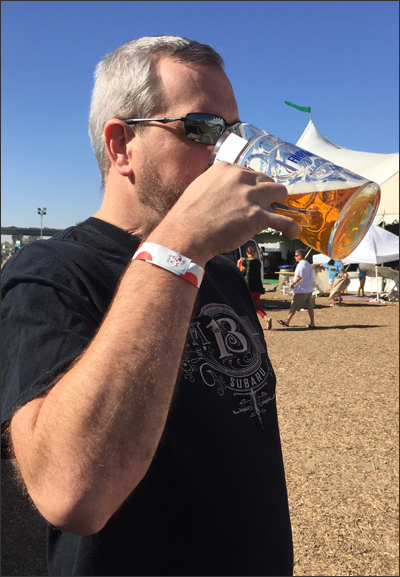 We checked out the food vendors next – this is when we found out that some had to pack up. Broderick was able to open with a very limited menu – they served Bratworst or Bockworst with fries. 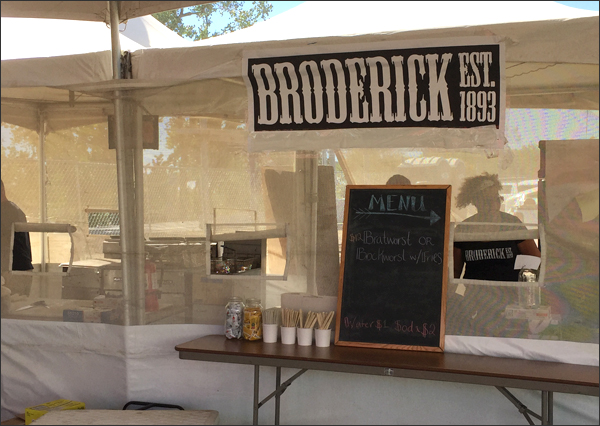 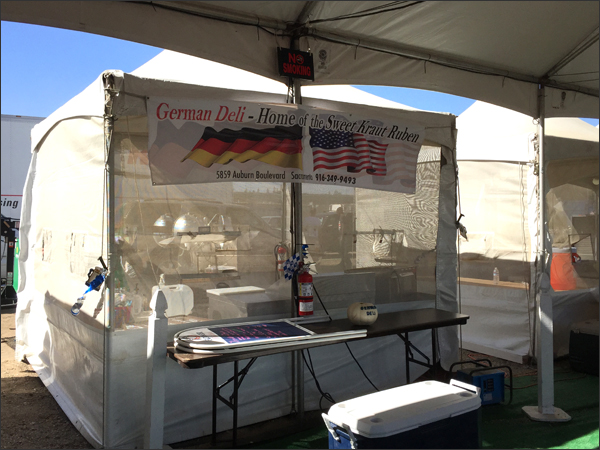 The German Deli had some menu items available too. 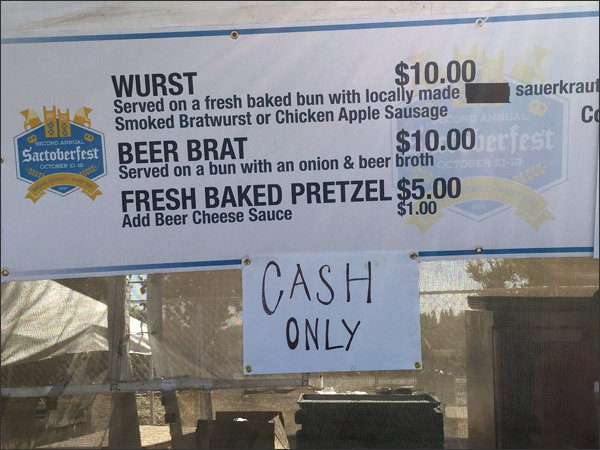 We decided to start with a fresh baked pretzel with beer cheese sauce. We grabbed one and then made our way to the main tent to get out of the wind and dust. I tried to ignore the fact that there was a layer of dust on the inside of my beer mug. After one beer it didn’t seem to matter. 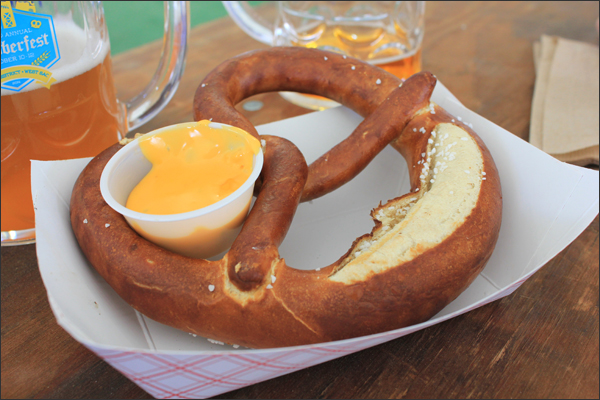 Event staff announced that they were going to open the VIP tent to all attendees that wanted to get out of the elements. The VIP tent had walls and couches for families to chill out. It also had a full bar and they were selling $5 Jäger shots and $6 Jäger bombs. 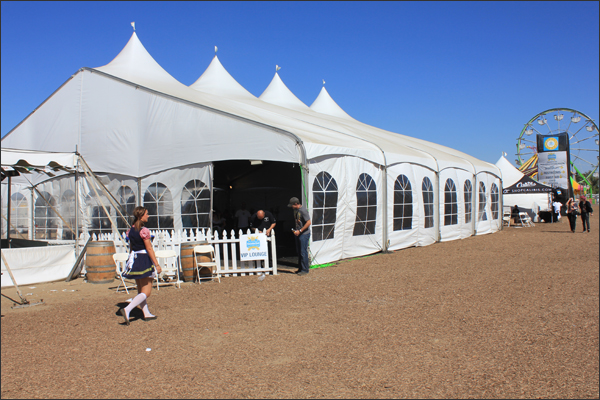 We checked it out, but ultimately decided we liked to be in the main tent with the band. First up was the Internationals. They welcomed us to the “Sactoberfest Dust Storm” – that made everyone laugh and they kept it pretty light throughout their performance. I’m sure the beer and Jäger shots made things easier for them. 🙂 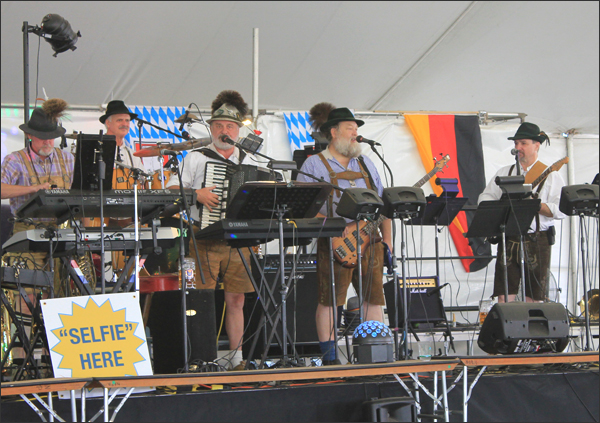 Next up was the Alpen Tanz Kapelle Band and the Nature Friends Schuhplattler Dancers. Until that point the dance floor was empty. It was covered in dirt/dust and they were concerned about that. The beer maidens in their dirndls jumped into action. 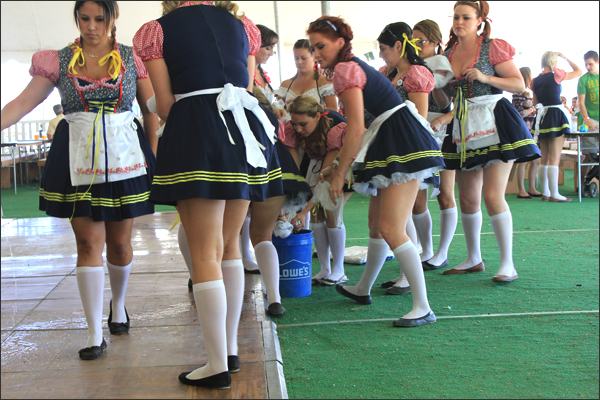 They all joined together and wiped down the dance floor to prep it for the dancers. 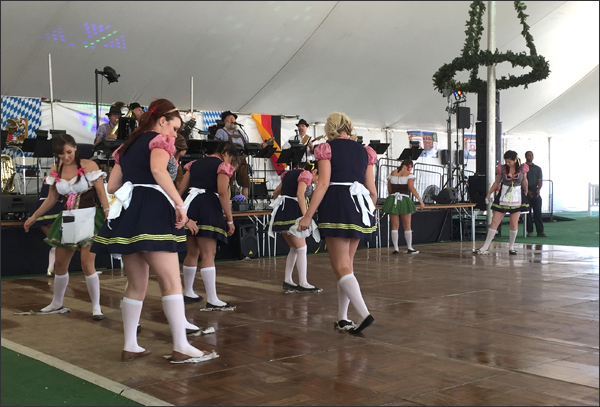 All of these girls never stopped smiling. They were tired after two very busy days and they still managed to have a good time dealing with the situation. Several of them sat down at our table to talk about the different beer options and to visit with attendees. 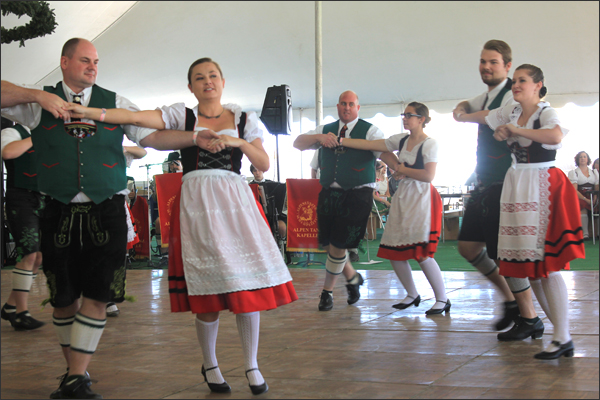 Once the floor was cleared and had dried,  the dancers put on a show. While watching them we were approached by event staff to fill out a survey. She offered us beer tickets, but because we’d already consumed giant steins full on very little food, we opted to just take the surveys. I thought it was important to let them know that event goers like us, really appreciated the staff’s efforts to not let the weather situation take away from the event. 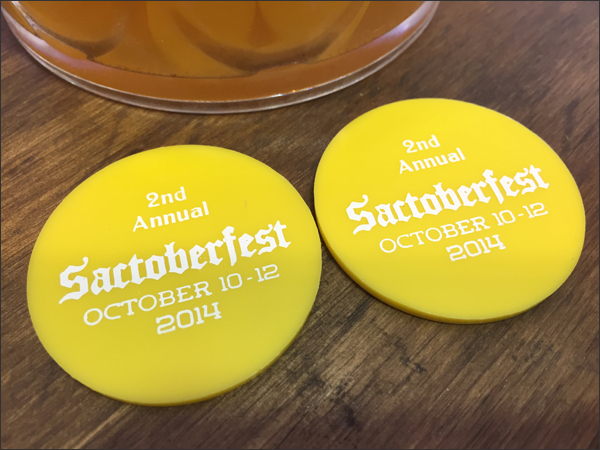 The gal came back to collect our surveys and she gave us two food tokens. Super sweet and perfect timing. I was starving. 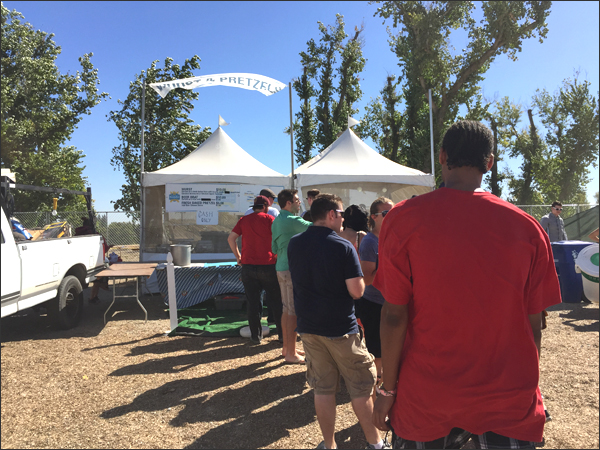 I got in line while Dan saved our seats. I wanted to take some more photos and it was the perfect opportunity to do that. I ended up getting us a second pretzel and a beer brat with sweet mustard. The line started backing up because the pilot lights kept blowing out due to the wind. The workers started handing out pretzels to people waiting in line. 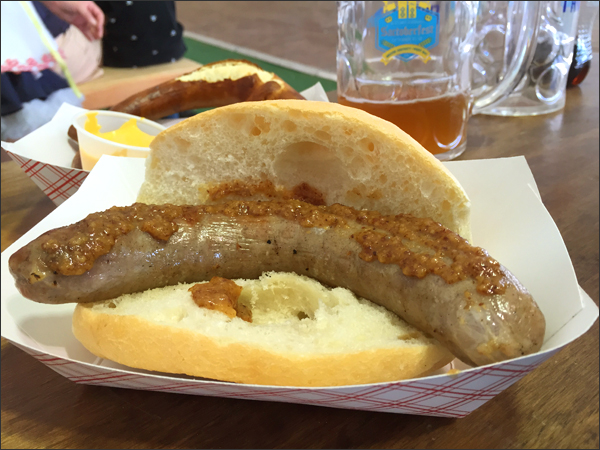 The brat was delicious and hit the spot. The 21 piece Chico Bavarian Band took to the stage next. The gal next to us was primed and ready for the Chicken Dance – she had the chicken hat and everything. We stayed for a bit and then decided to brave the elements to check out the carnival side of the event. 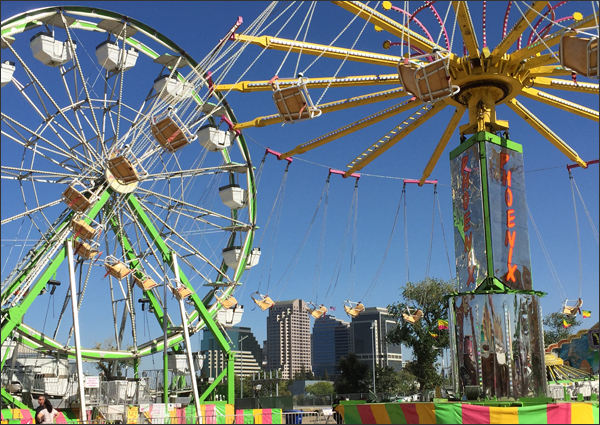 I thought it was cool to see part of the Sac City skyline in the background. West Sacramento’s Bridge District is a really cool place and I look forward to all the upcoming improvements. The urban plan calls for three bridges to cross the Sacramento River. I’m also really looking forward to the Barn – projected to open in Spring 2015. 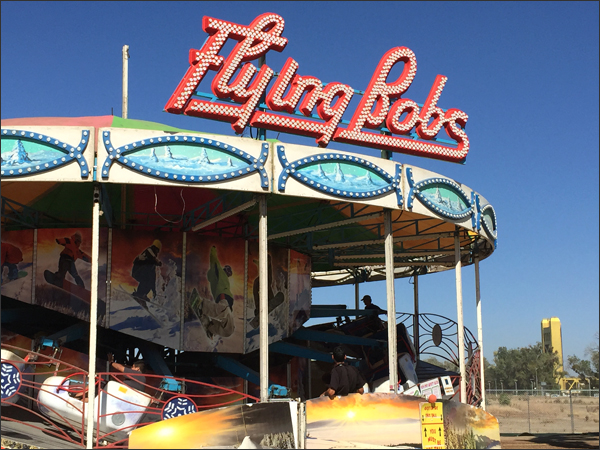 Flying Bobs with the Tower Bridge in the background… 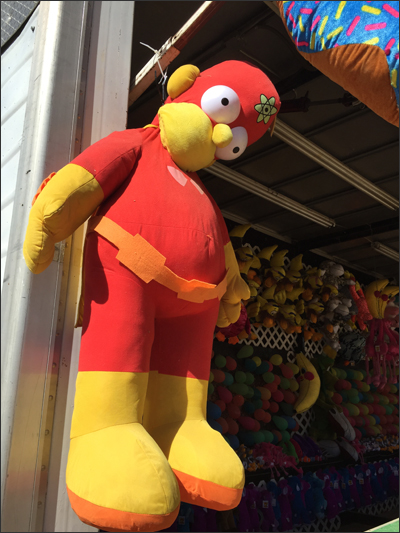 Homer/Radioactive Man just hangin’ out…. Carnivals freak me out as an adult, but man did I love them as a kid. There was the county fair and local church carnivals and we even had carnival rides on our high school campus for grad night, it was awesome. 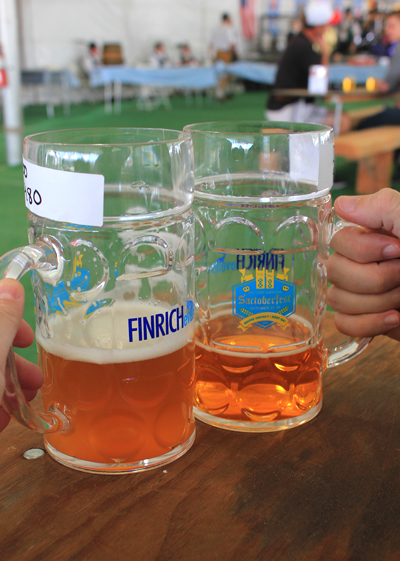 Sactoberfest was a great close to a wonderful weekend – Prost!

Permanent link to this article: http://foodiddy.com/?p=10180