I was invited to join fellow bloggers and media professionals Monday, September 29 for a special evening Sactoberfest preview at Ten22 in Old Sacramento. 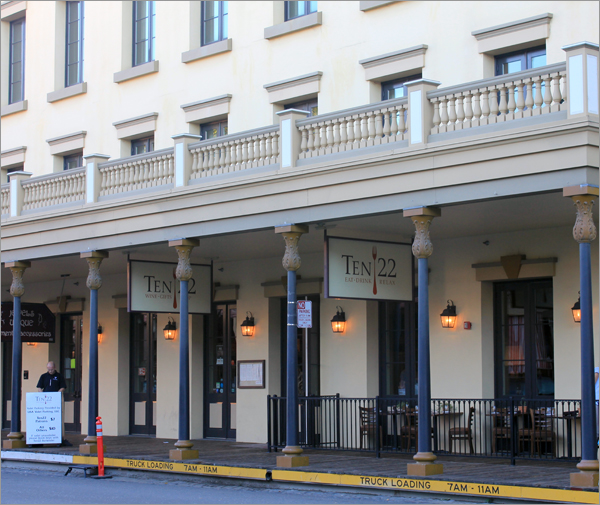 This event gave us a glimpse into what will make Sacramento’s big Sactoberfest celebration so unique. 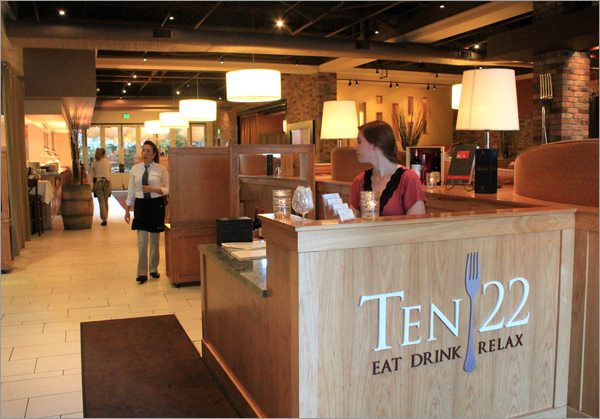 This was my first time at the restaurant, it’s been on my list to try, we’ve just never made it there. Ten22 prides itself in award winning cuisine and superior quality brews. Executive Chef and Central Valley native, Jay Veregge, offers a “New American” menu featuring locally sourced ingredients from regional farmers.

We had a special menu for the preview event, representing some of the foods that would be served at Sactoberfest. I look forward to going back to experience other dishes from their main menu. 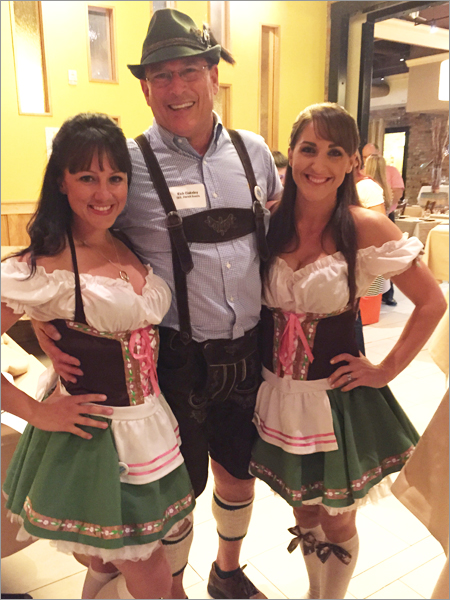 Guests were greeted by Emilie from 3fold Communications and Finrich Events staff.  Rich Clakeley, CEO of Finrich Events and his awesome bier maidens were some of the sweetest people I’ve ever met at a blogger/media event. Very genuine people that are passionate about what they do. I could tell that the success of this event and putting Sacramento on the “Oktoberfest” map is very important to Rich and crew. It was a treat to listen to Rich talk about the history behind Oktoberfest and the traditions that go along with it. 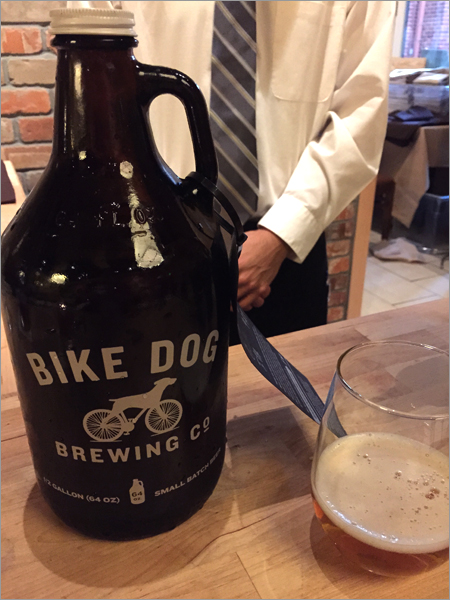 I started the evening with a sampling of Bike Dog Brewing Co. Pale Ale from West Sacramento. I’m very far from being a regular beer drinker/aficionado, but I do enjoy an occasional light bodied pale ale and Bike Dog delivered – it ended up being my second local favorite of the evening. 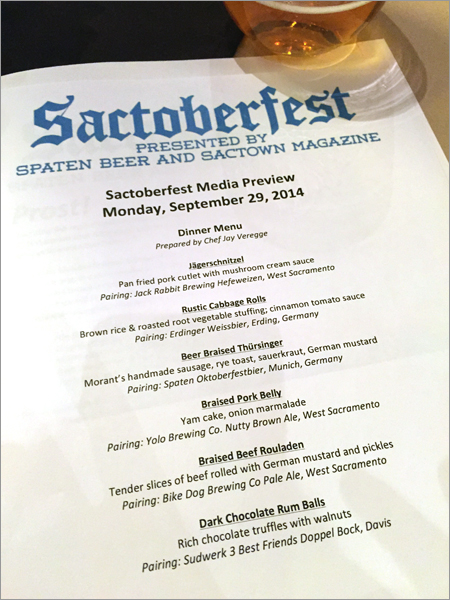 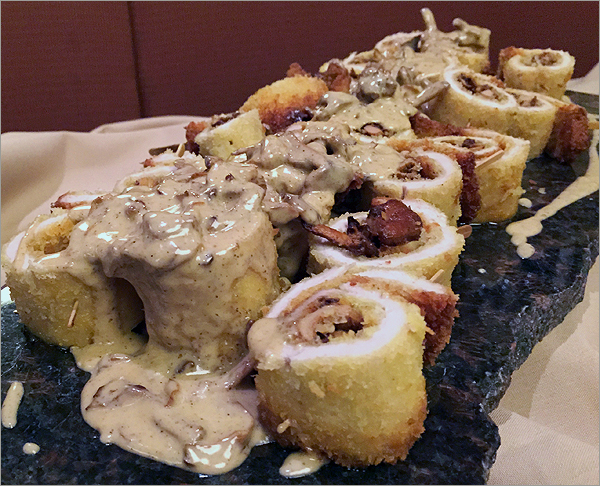 First up was Jägerschnitzel – Thin slices of pan fried, breaded pork loin with sautéed mushrooms and cream sauce. Let’s just say if I was home, I would have licked the plate. The beer pairing included my favorite of the evening – Jack Rabbit Brewing Hefeweizen of West Sacramento – A traditional wheat beer with a very mild wheat flavor. 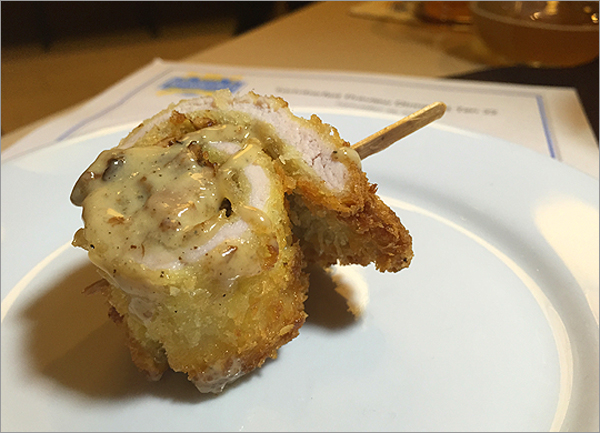 Ten 22 is not the only local restaurant participating in Sactoberfest. Local eateries, Fabulous Frickle Brothers, Broderick Roadhouse, The German Deli and more… will also be contributing German foods to the event.

O.k., let’s talk food photography.  I’m still in my full leg brace and I didn’t want to lug camera equipment with me, so I ended up just throwing my Canon in my purse, not realizing it still had my 60mm lens attached, whoops. So I only used my iPhone for the evening and THANKFULLY Sarah from CapCity Moms was there, because she’s a professional photographer and I’m sure her photos will be fabulous – so make sure you check out Sarah and Jill’s evening re-cap for good food porn once it’s up on their site. They are also hosting a ticket giveaway over there – so jump on that.

The evening took place in a very YELLOW, dimly lit room and she let me share her external light source with her. These dishes were works of art in person – not so much here in all of their iPhone glory. Squint and pretend my friends, squint and pretend. Thanks for lighting the way Sarah, they would be way worse without your glow. 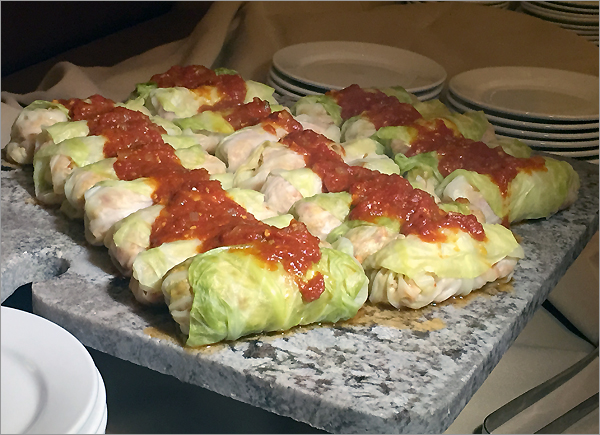 Rustic Cabbage Rolls – Brown rice and roasted root vegetables (carrots, celery and parsnips) with a cinnamon tomato sauce. Our beer pairing was Erdinger Weissbier of Erding, Germany. I often forget about stuffed cabbage as a meatless alternative, these were excellent. 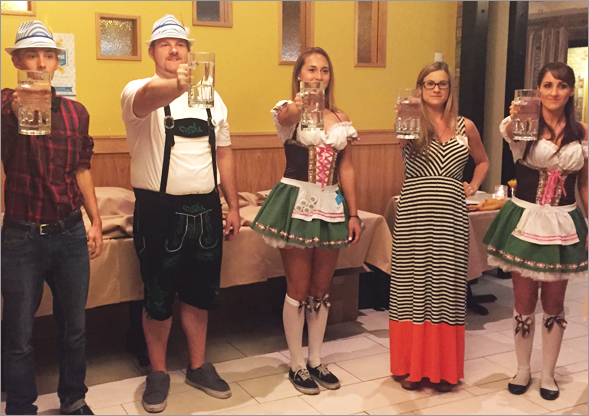 We were not only spoiled with food and bier flights all evening – we got to try our hand at some of the many games to be featured at the October 10-12 Sactoberfest event. Stein holding and beer pong. 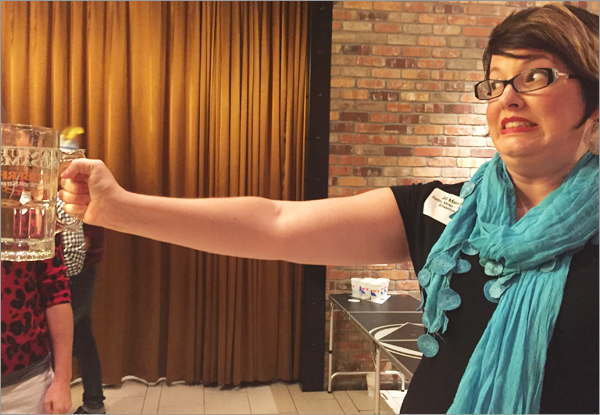 Sarah asked Jill to give her a scary face – LOL… they are both fabulous! The stein was heavy after 20 seconds. 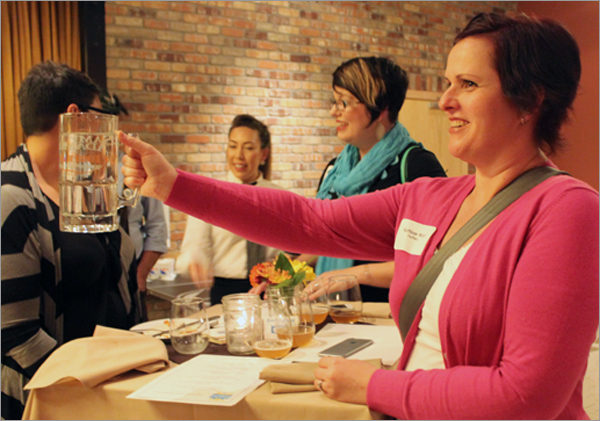 Arms were a shakin’, including mine. Thanks for taking my photo 3fold. 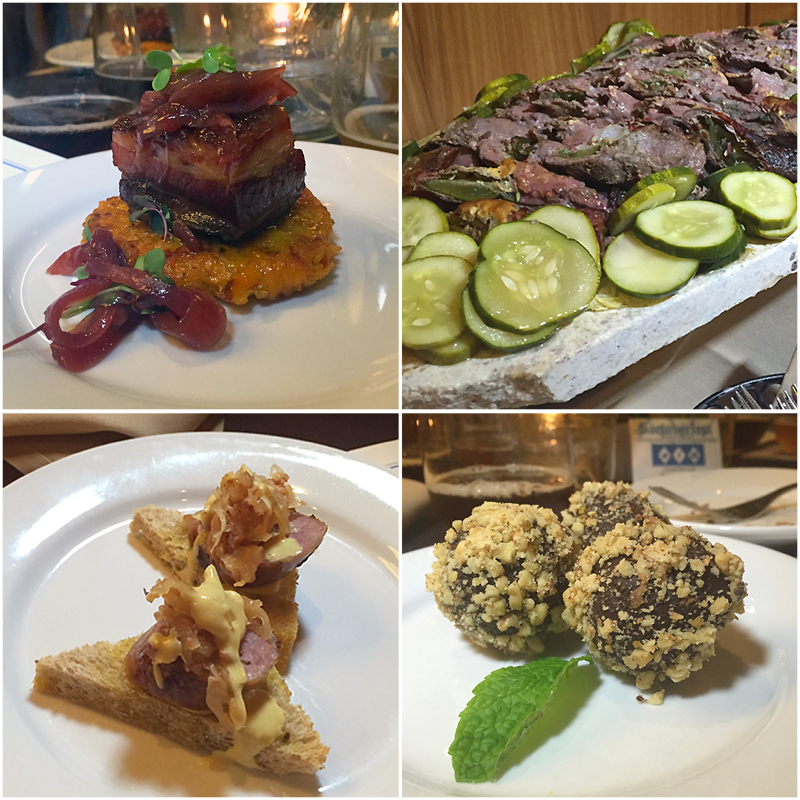 The food kept appearing and our taste buds were up for the adventure.

Braised Pork Belly (our special treat of the night – unfortunately not included in the Sactoberfest event) – Braised pork belly on a yam cake with an onion marmalade. The onions were so good that we cornered Chef Dennis to get the low down on ingredients. Simple… red onion, red zinfandel, garlic and low and slow cooking instructions. While a fat source wasn’t mentioned, we agreed butter or olive oil would be a necessity. I think he was holding out on us.

Our conversation went from onion jam to pickling very quickly and next thing you know, Chef Dennis was running into the kitchen to spoil us with his Sacramento Burger Battle pickles. He explained that he went pickle crazy for the battle – calling up his source ordering more and more pickling cucumbers. We’re glad he did, because the pickles on the Braised Beef Rouladen were some of the best pickles I’ve ever tasted. The sweet to heat ratio was something I plan to recreate in my own kitchen.

The Braised Pork Belly was paired with Yolo Brewing Co. Nutty Brown Ale of West Sacramento. The Braised Beef Rouladen was tender slices of beef rolled with German mustard and pickles and the dish was paired with Bike Dog Brewing Co. Pale Ale. It was handy that I already had some, the glass situation was growing. 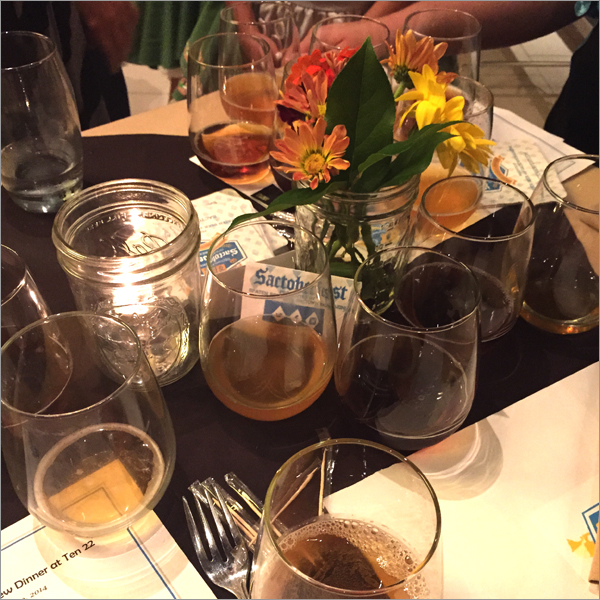 Another star dish of the evening for me was the Beer Braised Thürsinger. The sausage was handmade from Morant’s Old Fashion Sausage Kitchen on Franklin Blvd. Served on rye toast with sauerkraut and German mustard. I may or may not have had 4 of them. The pairing for this dish was Spaten Oktoberfestbier from Munich, Germany.

The event will showcase smoked bratwurst, chicken apple sausage and beer brats from Morent’s. The beer brats will be braised in beer with sliced onions and spices. The sausage is then grilled to order before being dunked in a rich beer and onion broth, served on a fresh baked bun from Pure Grain Bakery of Vacaville. A broth with caramelized onions is then ladled over the top – similar to a French dip – sign me up!

7″ Bavarian pretzels will also be served fresh from the oven.

Fried pickles and fried green tomatoes with dipping sauces will be available from the Fabulous Frickle Brothers.

Dessert for the evening was Dark Chocolate Rum Balls paired with Sudwerk 3 Best Friends Doppel Bock from Davis. The German Deli will be providing the decadent chocolate rum balls and streudle at Sactoberfest. 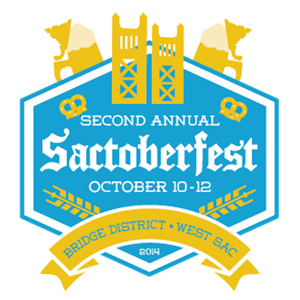 Taking over the West Sacramento’s Bridge District, Sactoberfest will draw inspiration from the original German Okotoberfest with its own unique twist. Revelers will hoist steins of authentic Oktoberfest premium biers from Spaten, Erdinger, Hofbrau and Franzikaner as well as local craft beers from Sudwerk, Yolo, Bike Dog and Jackrabbit with National favorites from Samuel Adams and Omission – all served by waitresses dressed in dirndl outfits under the massive bier tent covering 20,000 square feet.

Festival goers can listen to the many bands,  try their hand at stein holding, keg rolling, beer pong, wurst tossing, corn hole and more. If those types of games aren’t your thing – New to Sactoberfest this year is a full carnival – complete with more than 16 rides. So grab your friends and family and join in the fun.

Part of the preview included 2 premium tickets – Dan and I plan to attend, we’d love to see you there. If you plan to go, let us know and we can hangout.

The time honored tradition of tapping the first keg will start the festivities on Friday, October 10 at 3:00 p.m. This will be followed by a parade and live music.

A special thank you to Emilie, Rich, Ten 22, 3fold Communications and Finrich Events for hosting a great preview event, including me on the guest list and providing us with amazing food, spirits, swag and Sactoberfest tickets. I look forward to seeing you all at the event.

Permanent link to this article: http://foodiddy.com/?p=10132