I started seeing friends on Facebook “Interested” in The Sacramento Grilled Cheese Festival almost a year before the actual event – which was held on April 8-9 in Southside Park off 6th Street in Sacramento. Being a huge fan of the grilled cheese, I of course clicked on the Facebook event to learn more.

Enjoy cheesy deliciousness created by many of Sacramento’s great restaurants…A festival for grilled cheese lovers… why yes, that’s me! They had several ticket options, including a VIP option for the 8th that was for 21+ featuring specialty grilled cheese sandwich quarters paired with 4 oz. craft beer pours, hand selected to match. SO.MUCH.YES – Sign me up! 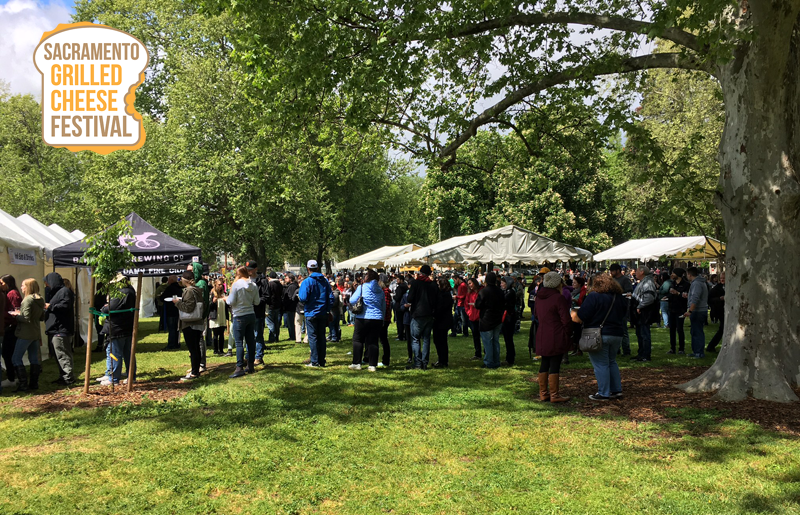 I had talked about going with friends and never got around to purchasing tickets and then the price went up and there were less than 10 tickets left before selling out. Whoops… my girlfriend Kristen and I scored the last two tickets and ended up paying $50/ticket. The smart early birds got theirs for $35. Part of the ticket price went to support the Crohn’s & Colitis Foundation of America – a cause I was happy to support in honor of my late husband Ace.

I managed to get a horrible cold the week leading up to the festival. I’m talking 2 bottles of Robitussin and three boxes of Kleenex kind of horrible, but I didn’t let that stop me from attending. It rained most of the morning and I was worried we’d be stuck running from tent to tent. I wore layers and ended up taking off both jackets by the end of the day. The weather Gods were on our side and the clouds parted enough to let the sun shine through.

Kristen scored an amazing parking spot just outside the park. The line to get into the festival was already 100+ people deep and we even arrived early. They were checking IDs, scanning tickets and only letting in small groups at a time. We got the lovely added benefit of being harassed by an anti-dairy industry protester screaming at festival goers while we waited. Sigh. I’m all for people that choose to believe in something enough to speak their mind about it, but when you are an a-hole to people that just want to enjoy THEIR CHOICE, it really does defeat the purpose and diminish the message you are trying to spread. 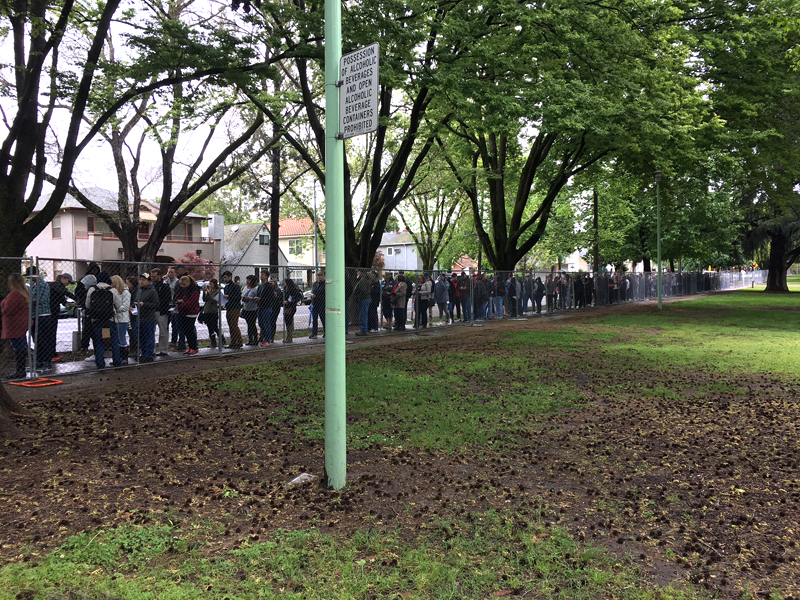 We were given food/drink tickets, a wooden token for voting for our favorite, a 4 oz. glass for beer and cider and a plastic plate upon entering. 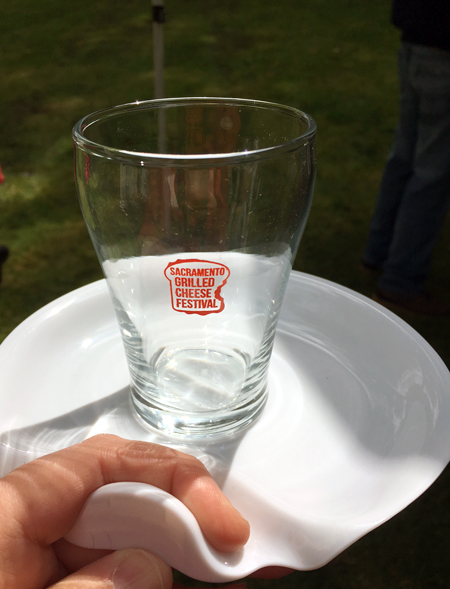 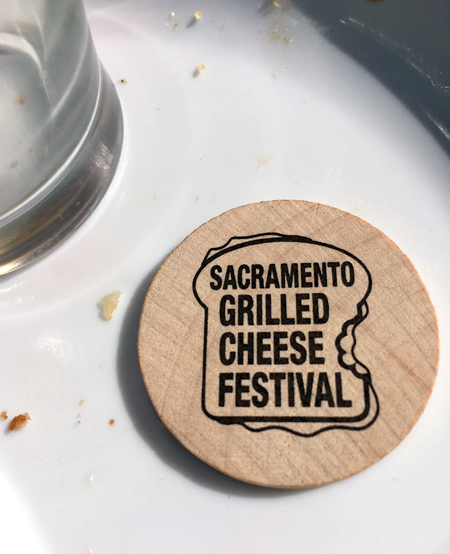 There were 10 booths to visit and Kristen suggested starting at the opposite end to the entrance – that turned out to be a great idea, especially since we got to start with a dessert grilled cheese and cider. 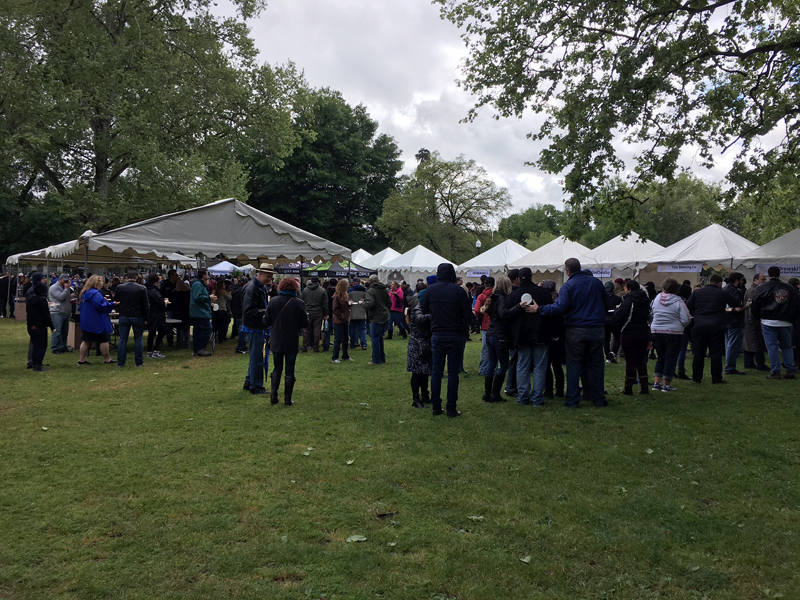 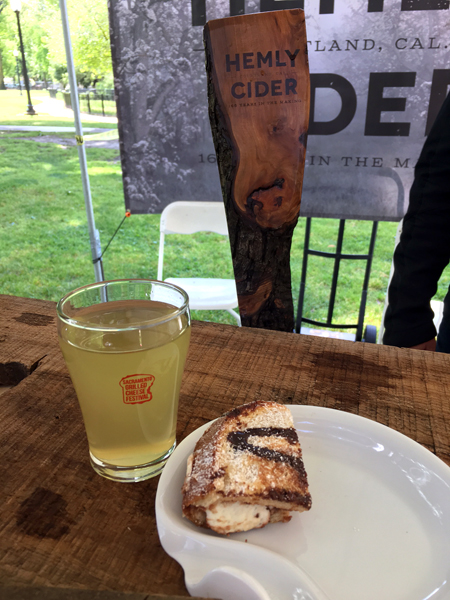 Next up was Hoppy Brewing Company which had a sourdough, brie, apple, onion combo with good flavor, but it was a little dry and the cheese wasn’t melted enough. 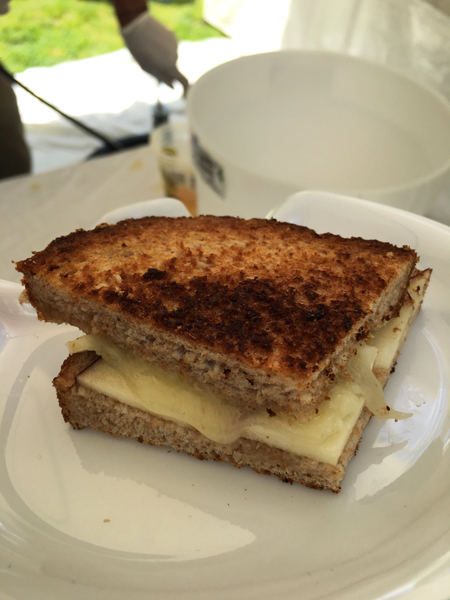 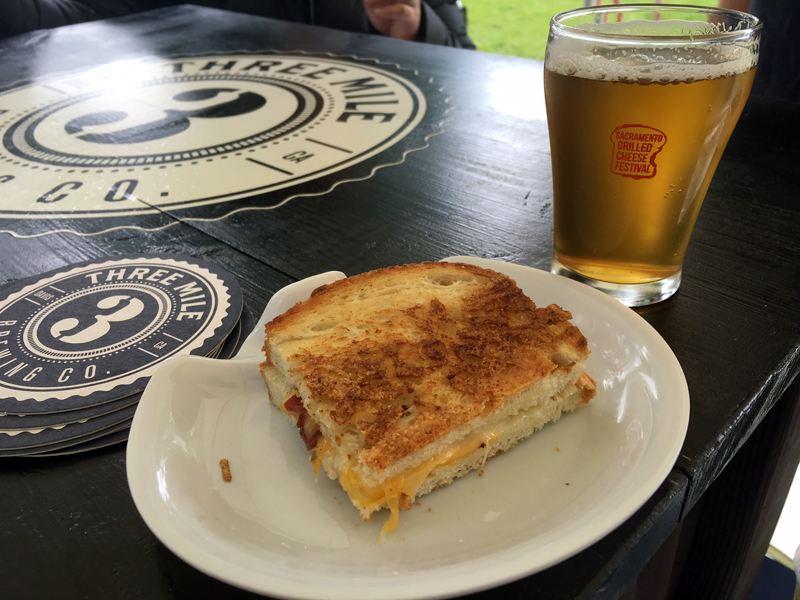 The Rind and Bike Dog Brewing Co. was up next. The Donut Grilled Cheese – Exsqueeze me? Did they say Donut Grilled Cheese? Why yes, yes they did. The Rind featured Marie’s Donuts – a raised-glazed donut turned INSIDE OUT and then grilled with Point Reyes Toma Cheese, a jalapeno-parsnip spread and Fuji apple slices… paired with Bike Dog Brewing Co.’s Milk Stout Beer. OMG – this was a freakin’ amazing pairing and got me super excited for the day and all of the others left to try. 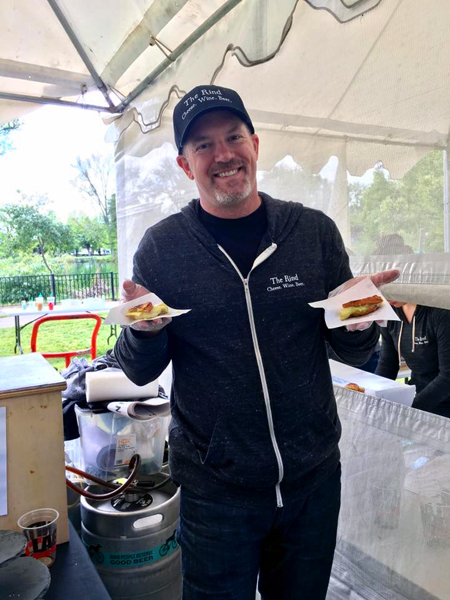 Pushkin’s Bakery and 2 Towns Cider was our next booth. Pushkin’s Bakery featured their Vegan Adult Grilled Cheese Sandwich – which I blogged about in my Brunch at Pushkin’s Restaurant post. Cashew pepper jack cheese, tomato and arugula served on gluten free focaccia bread. Like I said in my post, I was so surprised by the flavor, I loved it! – wouldn’t classify it as “Grilled Cheese” but for sure an awesome cheese sandwich. I chose to pair it will 2 Towns Ciderhouse Bright Cider (hard apple cider) and Kristen paired hers with their Hop & Stalk – Imperial Hopped Cider. We were both happy with our choices and they had stickers and really interacted with festival goers – thumbs up to that! 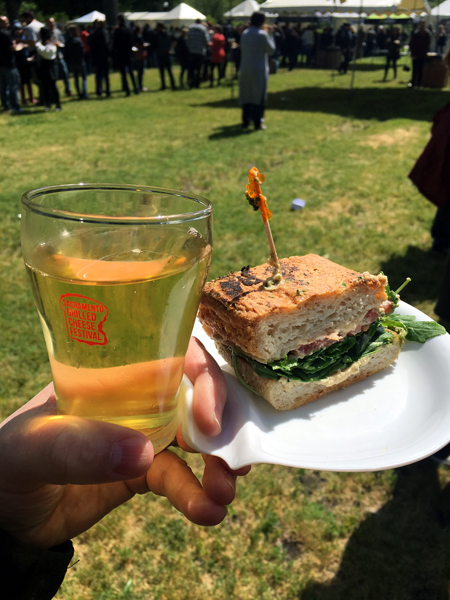 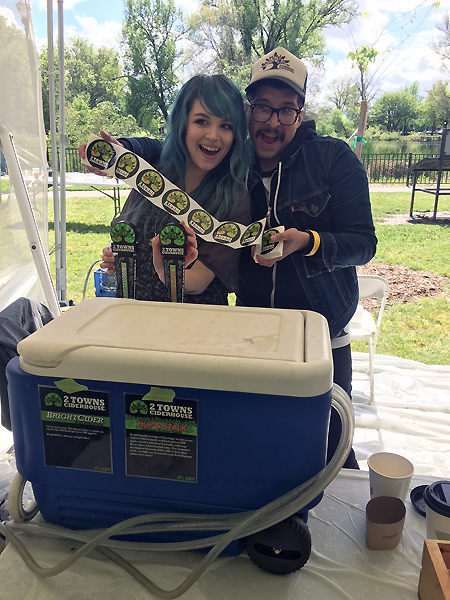 Oak Park Brewing was up next – they had two choice pairings. I went with the smoked gouda, bacon jam and Granny Smith apples on sourdough paired with Steamphunk Saison and ZOMG – this was in my top 3. I loved it! Kristen went with the other pairing so we could taste both. 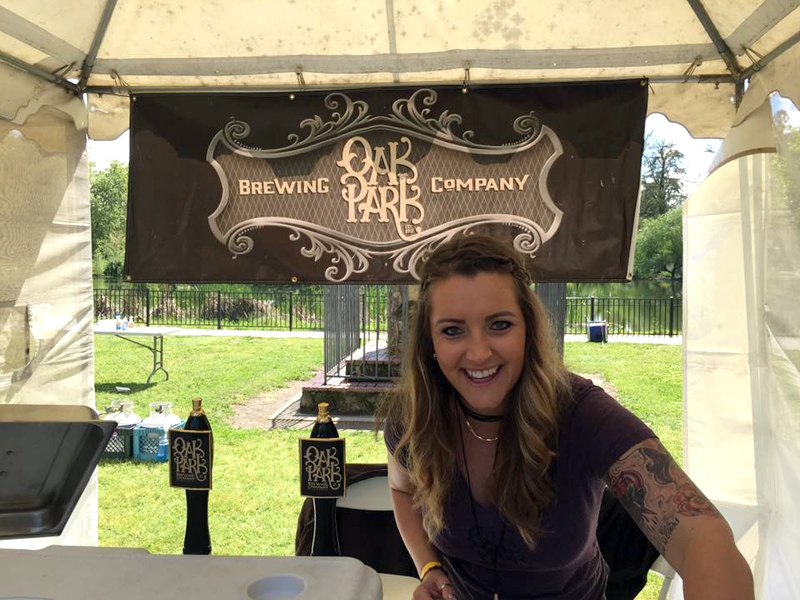 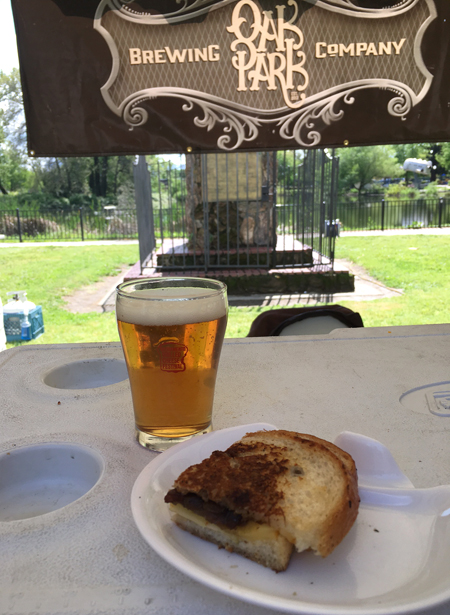 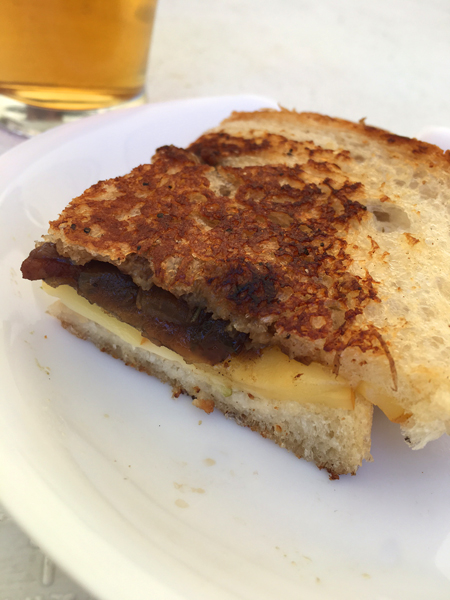 The GrilledCheezGuy & Yolo Brewing Company were up next. The GrilledCheezGuy is a catering, pop-up, and soon-to-be sandwich shop started at the Oakland Art Murmur in 2009. I am not absolutely sure what kinds of cheeses were used, I forgot to ask and there wasn’t any signage…thinking one had to have been Gruyere. I was honestly too mind blown from the most amazing part of the sandwich – Kelly’s Habanero Pepper Jelly used on the OUTSIDE of the bread – this was also in my top 3 favorites and ended up getting my final token vote. Teamed with Yolo Brewing Co.’s Nutty Brown Ale style beer… Yes and Yum. 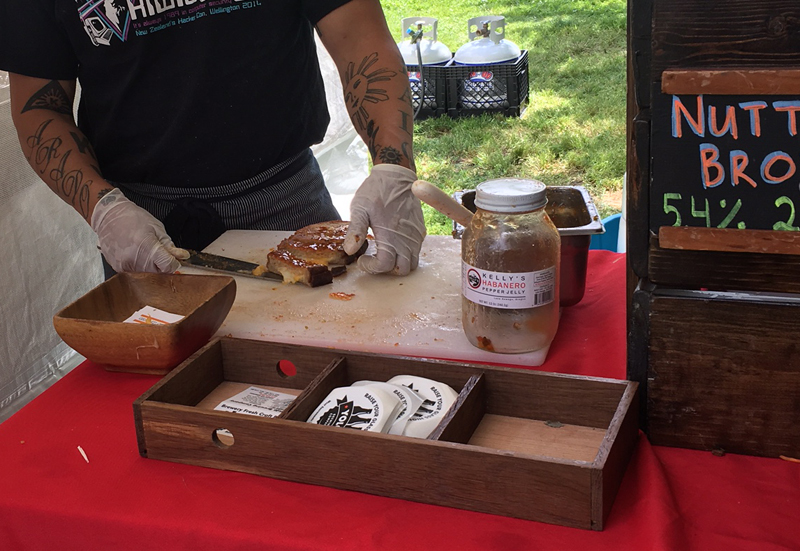 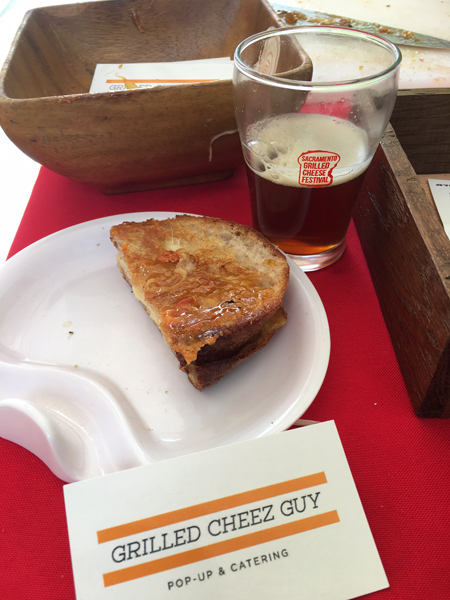 Drewski’s Hot Rod Kitchen and Track 7 were up next. We had already been waiting in line for 30 minutes when Drewski’s crew started counting from the front – they stopped with four people in front of us and said that they had run out and didn’t have any more pulled pork left. That was such a huge disappointment/bummer. They still served up a classic grilled cheese, but I would have loved to try the original pairing. Track 7’s Hoppy Palm  – American Pale Ale was the pairing choice. 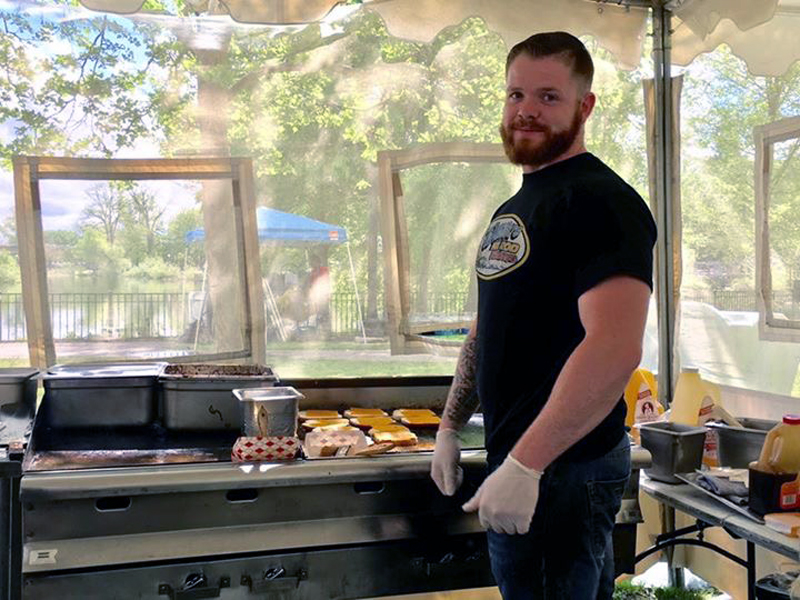 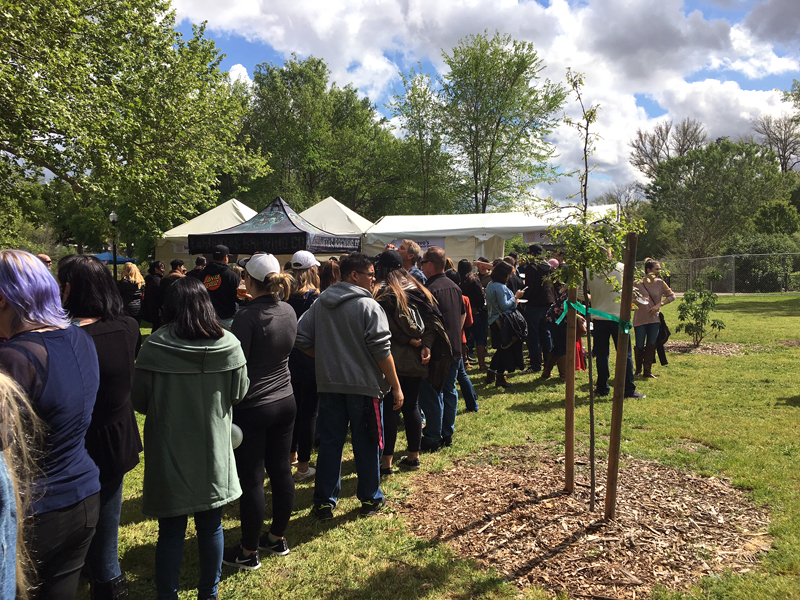 I waited in the Bravo’s Soup & Sandwich Shoppe/River City Brewing Co. line while Kristen waited over at the Sonoma Coast Shuckers and Lagunitas booth. It was the longest line of the day and Bravo’s was moving fast enough for us to switch places. It was GAME ON and we were winning! 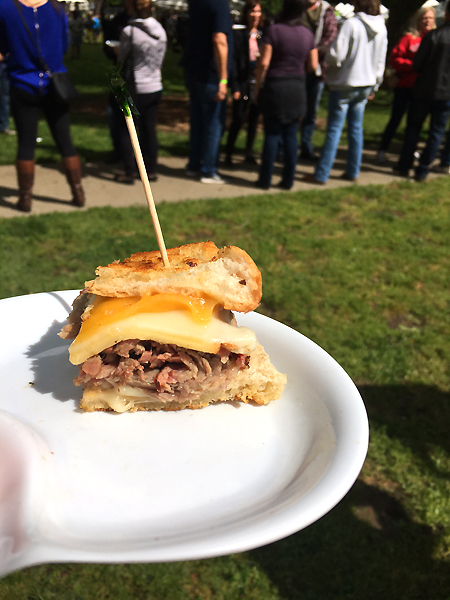 Bravo’s served up Santa Maria rubbed Tri-tip, smoked gouda, cheddar, provolone and pepper jack on a jalapeño crusted bun. Super “Team Moist” and the smoked flavor of the meat combined with the cheeses and jalapeño infused puff bun was incredible. I found out later that Bravos and River City Brewing Company took the People’s Choice award. 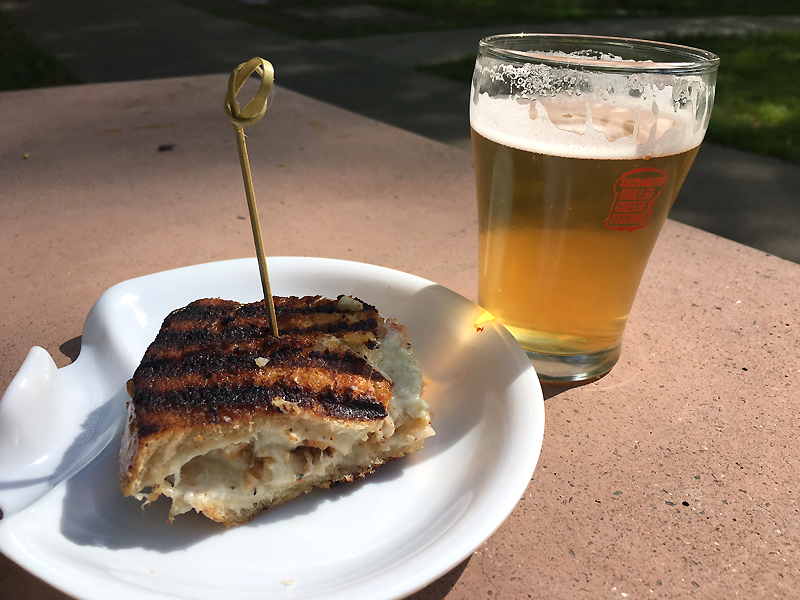 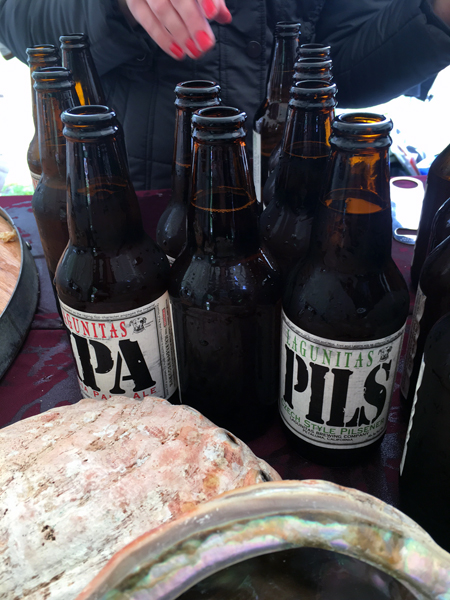 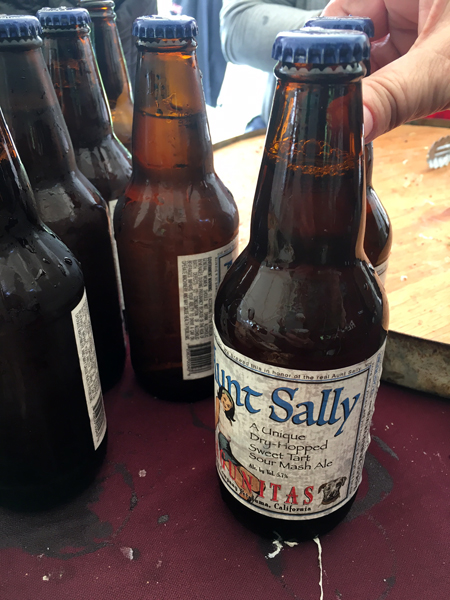 We recently chatted with the owner of The Rind at another event and he said that they learned a lot being that it was the first festival and they plan to change some things for next year. Lots of booths ran out of food on the first and second days. I guess we were lucky in that we only experienced it with the last two booths and I’ve had Drewski’s from their food truck many times, which included their pulled pork.

All in all it was a lot of fun – trying to juggle the glasses and plates with jackets/purses, etc. was a bit of a struggle, but man… grilled cheese at every stop sure made up for it. 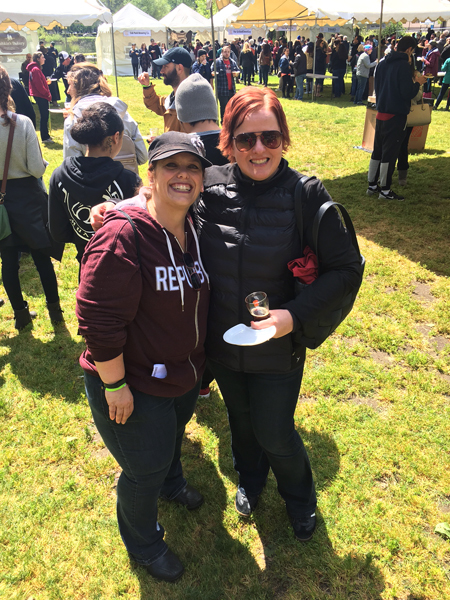 I told Kristen that I wasn’t going to finish each of the 4 oz. pours due to being sick and already jacked up on cough syrup… then after finishing the last drop of the 5th pour,  I remembered saying that. Ha-ha. The fresh air, melting cheese, beer and cider magically made my cough disappear for a few hours and I welcomed it. I felt horrible the next day, but really enjoyed myself at the festival.

I didn’t attend Sunday’s general admission – all age family part of the two-day festival, but that sold out too. The website has a newsletter link where you can sign up for alerts for the second annual. They claim they will be back and better for 2018 – woohoo!

Permanent link to this article: http://foodiddy.com/?p=10905